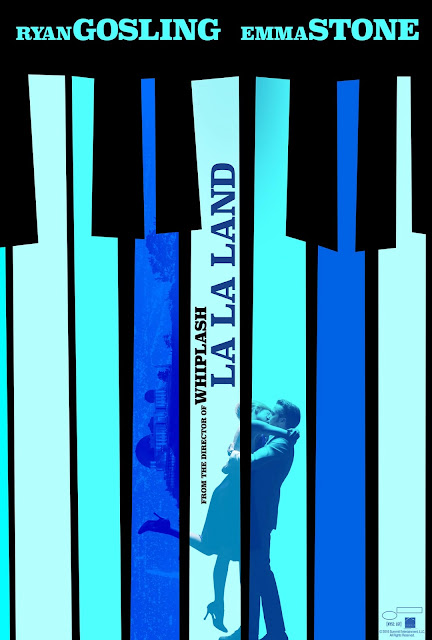 The fact that La La Land (2016) even exists may be the most stunning thing about it.  In a movie that should draw out superlatives about near every aspect of the film, that in an era of pre-awareness and Oscar Bait that usually equates to "who can tell the saddest kinda true story (but we cut so much stuff out)?" filling theaters in December - really, it's astounding to see anyone financing something there's no guarantee anyone will show up to see.  While Emma Stone and Ryan Gosling are two of the best of their generation, the era of "star power" guaranteeing a hit is long over.

Hollywood still puts out the occasional musical, adapting a Broadway show here or there (example - Chicago or Hairspray), or the forthcoming melding of CG and live action with Beauty and The Beast.  Moulin Rouge may be the last original musical, and that was a collection of pop songs sung in period dress.

But this is a new movie, not an adaptation.  It's a fantasy of Los Angeles as the epic backdrop large enough for the widescreen adaptation of lives as they play in our heads, saturated in Technicolor, all the other players happy background roles as we cast ourselves as the protagonists in the romantic, astounding story of our lives.  And that's more than okay.

Before we even get started, I'm curious what JAL has to say on this film, as I thought of him many times during and afterwards as I've worked on this write-up.

Look, I don't know much about dating.  It's been a while - but if you're looking for a movie to see with someone you just started seeing?  Hot tip:  La La Land.
As new as the film may be, it's caught in the "filmmaker's LA trap" of assuming (a) everyone loves LA as much they do (couldn't possibly), and (b) that we've never heard the story before of two creatives trying to make it work romantically in LA (we have TMZ.  Also, about 40% of indie movies in the 1990's in the Swingers era.  Another 40% wanted to be Tarantino.).

La La Land is not an adaptation of a Broadway show, there's no attempt to capture that experience for the screen.  Instead, it's truly a movie musical (although we can expect Broadway is even now negotiating rights to bring this to the stage) - and it speaks with the language of film.  This isn't a musical in the Busby Berkeley tradition.  I wouldn't expect a cast of thousands on a gigantic sound stage making geometric shapes out of themselves, and at no point does Emma Stone go full Esther Williams.  Around the song and dance numbers, the big set pieces, it contains deft performances playing to a camera rather than the back row.  But it also works in the conversation with the audience possible in film that stage plays more often have to deliver with a symbolic language all their own.

I dug Rogue One's obsessive attention to detail and understanding of beautiful master shots, and, similarly,  La La Land is masterfully designed in literally every single frame, but also has the best cinematography I've seen in a movie - possibly full stop, but at least in the past several years.

I don't talk much about art design of a film, and if I distract myself here a bit with what I felt I underserved in any discussion of Rogue One, which was a fantastically designed and shot movie, forgive me.  But seeing two movies in a row that were so gorgeous is kinda not my typical week, so credit where it's due.

La La Land uses real locations and sets that seem real enough to bring its version of LA to life, a city dripping in memory of past glories while countless hopefuls dream of being a part of the legend themselves.  It's an LA where a nobody can become part of the pantheon overnight, and reminders of who came before are painted on walls in caricature, adorn the posters hanging in homes of would-be-starlets seeking their chance.  Even the art-deco architecture and pool-side parties are relics of a past that's more fiction than reality - the characters inhabiting the space inbetween, reality constantly threatening to crash in.  Restaurants still have leather-seasted booths and walls painted crimson, jazz clubs are just the right level of seedy, houses exist on winding, wooden streets and two can board the Angel's Flight without a mess of tourists to ruin the moment.

That doesn't mean we don't get fantasy sequences and brilliantly designed sets that aren't part of LA's reality even on the best of days.  Merging the two seamlessly is a lost tradition of the musical as "realism" took over in the last 60's, but even Sid and Nancy knew it had to have a dream sequence or two.

In an era when the camera can go anywhere, where audiences are used to all sorts of camera movement, for good or ill, La La Land delivers a masterclass in long takes and single shots, and not as the stuntwork of Rope or Birdman.  The movie is not entirely comprised of tracking shots, and when it holds still, it's post card after post card of thoughtfully composed frames.  When the camera does remain in motion, there's no pretentiousness.  Instead it serves the numbers as they unfold, carrying the viewer through the sequences in seamless, breathless takes.  Surely digital compositing helped make some of this possible (see the first and second numbers of the film), but the effect and impact are stunning.

Mix this with lighting inspired by stage lighting, drawing and pushing focus - refusing to adhere to reality in favor of dramatic impact - and you get a reality that works more in line with our perceptions than simply letting the camera role.

Casting Emma Stone and Ryan Gosling surely helped ensure the film could even be made, and the choice both limits and enhances the movie.  No one is going to accuse either of them of missing out on careers in opera, and what dance options were available to the movie were a bit limited by what Gosling, in particular, can do.  I don't want to damn with faint praise - the movie understands how far it can push its leads and works to make them look terrific without drawing attention to the fact that, say, we're not going to see Gosling competing on So You Think You Can Dance any time soon.  Because the pay off is far more in the movie's ability to be close-up with these characters and believe every single beat they go through.

As good as Gosling is, Stone is brilliant, and I'm glad we haven't lost her to superhero films or buried in a franchise somewhere.  Whether this character - a struggling actress - in particular hit home or not (when was the last time Stone struggled?  Auditioned?), it's not like seeing her fully inhabit a role is anything new (but never dull).  This isn't the capstone on her career, it's going to be one of many highlights to consider over the next several decades.  And, yes, Gosling does bring a tremendous amount for Stone to work with.  His passionate jazz-geek character rings true to anyone who knows an obsessive, insisting upon a knowledge of the past to make an informed decision regarding something everyone *knows*, but maybe doesn't really know beyond the surface layer (cough).  I don't know how other actors might have played that better or differently, but it's easy to appreciate the arc the character goes through.

While the music is nothing like modern pop music, including a pointedly self-referential bit - and it's fair to say Writer/ Director Damien Chazelle (Whiplash) speaks to his own anxieties about the film through the conversations of the leads - will this even play?  Will the kids even show up?  Who cares about jazz/ musicals in 2016?  How can you make this something someone will come and see?  How can you make it something that isn't a simple revival-type thing or nostalgia act?  Can it move the medium forward without compromising it?

If a musical finds the moments at which to sing those when the characters need to be put feelings into song (and dance) - this is maybe the platonic ideal of that notion in 2016 terms.

Still, as good as Moana's soundtrack was, I suspect that this is the one the cool kids will know in 2020, not something trotted out at recitals as a safe score, but something the high schoolers sharpening their tastes now will have in the back of their heads, even beyond the musical theater kids.  And, yeah, I do think they managed to update the structure of the musical for modern audiences.

I'll keep my singular disappointment in the film locked up as it's a legitimate choice by the writer/ director, and I hate to spoil the film in any way.  There are too many good choices he made for me to complain about a single decision.   Seriously, I've said as little as possible to make sure you guys (a) check out the movie and (b) just let it unspool for you with nothing to block your enjoyment based on what I said.

Anyway, it's a hell of a film, and I look forward to seeing it again.