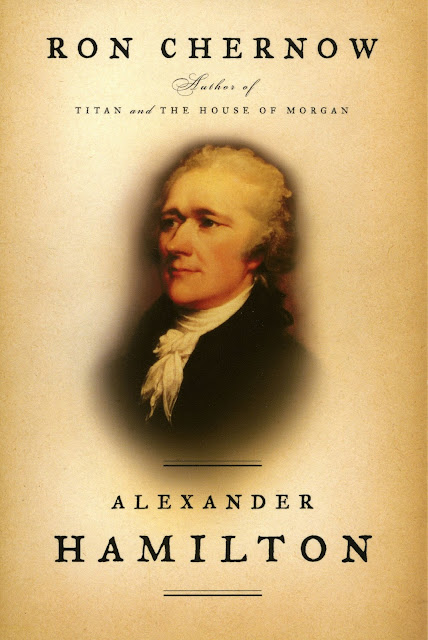 Like everyone else, I didn't think about Alexander Hamilton a whole lot other than knowing he was on my money, invented the Fed, and somehow got into a duel (and lost) with a more obscure Founding Father, Aaron Burr.  The Revolutionary War era and the founding of the United States is such a deeply complex time in history, I've never really had my head around it, and as that history in broad scope tends to work best for me when woven into biographies, I'd long intended to read biographies of Benjamin Franklin, Thomas Jefferson and a George Washington bio written by Ron Chernow that was given to me by NathanC that's been collecting dust for way too long.

Part of my issue is that most of those books are the "why is this 900 pages long?" variety, and I've been so buried in Roosevelt biographies, I've not really made enough time or room in my head for much else, but I've been working to change that.

Of course, along came the Grammy performance of the opening number to Hamilton, a fact-laden number intended to get us to the start of the action but laying out Hamilton's childhood story (which is enough to fill a book itself), and - like for so many of the rest of the people who saw this or listened to the soundtrack recording (or the lucky few who've seen the show), I was compelled to know more.  Maxwell suggested the Chernow bio, so I burned an Audible credit and picked up Alexander Hamilton (2004).  And, 37 hours of audiobook later, here we are.

I won't bother to sum up the life of Hamilton here, but as he lived only 49 years and managed to accomplish an astounding amount in that time, and given the Dickensian origin story from which he originated, in the social environment of the Twenty-First Century, it's in some ways no wonder he's just now being re-discovered.  If knowing Washington and Jefferson grew up as aristocratic gentlemen planters doesn't inspire the kids, maybe knowing a kid was orphaned and left to his own devices somehow made his way to New York and became Washington's right hand man, Secretary of the Treasury, a General, a newspaper founder, a framer of the Constitution and its foremost defender...  And still had his scandals and spats (making enemies of the big guns of American history)...  maybe that's something the kids can get into.


The book does a fantastic job of using Hamilton's involvement at so many key junctures in the decades at the birth of the United States to illustrate how these events occurred, how they tied together, who the forces were that made them happen and how the Founding Fathers - contrary to popular American myth seemingly based off a few John Trumbull paintings  - did not see eye to eye on nearly anything.  Hamilton enters the picture on the national scene thanks to his success as Washington's aide-de-camp and subsequent victory at Yorktown under his own command.  As he knew it might, military success proves the path for a young man of no social standing to vault into a new social stratosphere.  From here he's at the Constitutional Convention, made the first Secretary of the Treasury, and eventually an Inspector General of the US Army.  Along the way he's a lawyer, writes more than half the Federalist Papers, invents the Coast Guard, the New York Post, our Federal Reserve and more.

The hardest part for me to keep up with was, unfortunately, in outlining how Hamilton built the economy that we're still working with, and while I understand American debt and credit, it's not exactly as riveting as much of the rest of Hamilton's narrative.  I wish I could say this was the gold of the book, but there's a reason the musical focuses more on how this role cause disputes with Jefferson as Secretary of State and how it birthed the two party system.

At all times, Chernow keeps Burr somewhere in the background or in the wings if he's not in the middle of things.  As the two head toward the fateful duel, we see how very different these two men were, their motives, their role to play.  Chernow is not looking to find any redemption for Burr, and while nothing was inevitable about the two having an eventual violent clash, it's also fascinating to see them like two waves that occasionally intersect and one or the other takes some damage, and at other times they combine to form a greater force.

Chernow's investigation seems as complete as it could have been.  That he developed a passion for his subject is never in doubt, and he doesn't shrink from editorializing in a way I can't say for certain I've seen elsewhere in quite the same way.  He's no fan of Thomas Jefferson and makes a solid case as to Jefferson's myopia and hypocrisy (reading a Jefferson bio on my own might help to balance the scales).  And when Hamilton makes mistakes - personal mistakes with grand, National, history bending consequences, he's unforgiving of Hamilton's lapses in judgment.  Even if you want to occasionally say to the author "yes, but...", you half feel the author is writing out of frustration with his complicated subject.

Over the course of his life, as told by Chernow, Hamilton is less vague and shadowy, and more of a force of nature, sometimes channeled perfectly under the right stewardship or in the right company.  Left to his own devices, he seems to lack a rudder to keep him on the right path.  Whether the steward is George Washington, his General, his President and mentor, or his steadfast wife, Eliza, he seems to require a nearly insurmountable task and a sounding board in order to succeed.

At first Chernow's editorializing about Hamilton's affair with Maria Reynolds seems almost prudish until you realize he's working backward from all the impact the affair and subsequent self-outing on the topic Hamilton did and how that so deeply impacted the course of history - weakening Hamilton and therefore the Federalist Party and setting the country on a path to an endless cycle of argument over what the point of a central government is for.

Chernow's treatment of Hamilton's closest circle is inconsistent in coverage.  We learn much about his wife Eliza, whom Chernow complains there isn't enough left to history to get a complete portrait, but then he discusses other players as if the reader already knows all about them (we don't).  Further, endless allusions are made to Hamilton's status as a flirt, possibly a rake, but Chernow never gets into specifics of *why*.  Prior to the Reynolds Pamphlet, Hamilton was known as a Lady's Man, but it's hard to know what, exactly, this means or meant.

What's fascinating is reading about people like Hamilton, Roosevelt or others who were working on another level, creating a new world out of the material of the old.  They were not the people who happened to be there at the time, their presence at that time was what drove the events as they unfolded, and that's not at all how we teach American history in schools.  Which is @#$%ing tragic. We can do with less myth-making in K-12 History courses and more appreciating of  the figures and forces of their times.  It's pointless to memorize dates if you don't understand who, what, and why.

Seeing the forces that led to the founding of our nation and the arguments had then certainly inform the present, and there are worse things than the fact this book has taken off as popular reading during a time of national dis-unity.  What those Founding Fathers said and did and why may be genuinely crucial reading at this point as we consider a path forward for the nation.

Chernow makes a fine argument for Hamilton's importance to the founding of the Republic, and gets across how an early death and unresolved disputes with the survivors led to his name being smudged from the usual list of founders.  I am uncertain the goal of any of these books is to make you *like* the focal subject, but understanding them as much as one can via letters and writing (and Hamilton left behind no small amount of his own written words) is required.  And, in that, I think Chernow succeeds.  I'll certainly be reading his Washington bio in short order.

As an audiobook - there are worse ways than to listen to Scott Brick who gets curiously emotionally invested in his delivery from time to time, but at least you know he's into the book, too.  I swear I've heard more from Brick in the past couple of years than from most of my own family.  I have no idea where he finds the time to record all of these books unless "Scott Brick" is the shared name of a set of triplets who all record for Audible.
Posted by The League at 1/23/2017 10:59:00 AM

Given my new half-hour commute, I'm always looking for good audio-books, so this sounds like a winner.

I find it really interesting how this musical has tapped into the zeitgeist. I don't follow the world of Broadway musicals, but I'm familiar with some of the songs thanks to my friends daughters, ages 10 and 13, who are obsessed with the soundtrack.

I'm not at all in tune (ha) with the Broadway world, but Maxwell and others started talking about that soundtrack and I half paid attention. It was that video clip above that got me to sit up and take notice. And, hey, while it's a musical and doesn't entirely adhere to reality, it's going to raise a generation that probably better understands the Founding Fathers than any in recent history. Only, you know, in song.

If you don't want love the soundtrack for being too musical-ly, then check out the Hamilton Mix-Tape. It's fascinating.