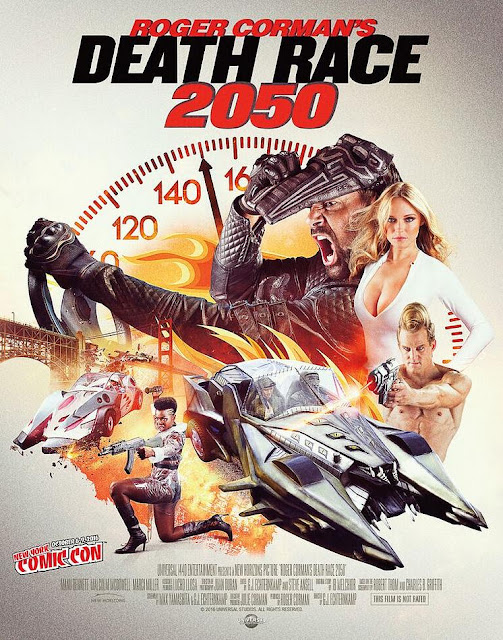 By no stretch of the imagination is Roger Corman's Death Race 2050 a good movie, but it was released this week (streaming on Netflix at the moment), and I needed some campy satire to wrap up this particular moment in American political history.  You guys be you, I'll still enjoy some barely concealed hostility hidden beneath a thin veneer of comedy and allegory wrapped up in a decidedly trashy movie.

I still like a good B-movie.  Heck, a film-loving co-worker asked me what I recommended that I'd seen lately and my two answers were Tower (not a B-movie) and Starcrash.  While I always like the unintentionally hilarious bad movie, Roger Corman has made making lower-tier films an artform and routinely pushed what's possible in movies thanks to an interesting mix of inventiveness, a certainty no one is watching all that closely, and a certain fearless stunt filmmaking.  Sure, sometimes the product is bad (well, all the time).  The politics can be almost confusing as you grapple with stereotypes of race or class mixed with stereotype breaking and shattering.

But, hey, I couldn't sleep well growing up, and trashy movies were there for me.  I may be the only person you know who owns a copy of Reform School Girls.


That said - I have never seen the original Death Race 2000, but one drunken night in Lubbock, Texas, me and my friend Wagner watched the Jason Statham-starring remake, Death Race.  I was sold on the idea as the film features Joan Allen as a post-apocalyptic TV honcho (You can totally tell she's cracking up the whole time).  It's fun, but you can feel most of the edge is taken off.

Not so with Death Race 2050.  This version places the Death Race in the dark future in which we're now living in the United Corporations of America (which looks suspiciously like Mexico), the states re-named into colorful descriptors that might be placed on them by ganglords.  Arkansas has been renamed "Walmartinique" (which I may or may not adopt myself).  The unemployment rate is in the mid to high 90th percentile.  Oligarchs who stole their look from The Hunger Games are living it up while everyone else wastes away.  Things are bad.

But in this future, the wealthy and media-savvy have, as so often is the case in bread-and-circuses dystopian futures like the actual present we're living, provided a distraction, a great opiate for the masses.  They've got VR goggles that will place the viewer right into the action.  People tend to stay at home plugged in, living in squalor but not seeing it once they slap on the goggles.

This Death Race, they've upped the technology and now the viewers will be tapped into passenger, seeing, feeling and even smelling everything the passenger sees.

What makes the movie a bit more challenging to watch as a 41 year old is the actual point of the game - the drivers have to hit pedestrians, earning points for adults (10), children (20), and the elderly (50).  It seems that the government accidentally stopped disease and now, as they say, the only thing that kill an American is another American.

Our racers are a southern blonde with her own religion based on pop culture, a hip-hop diva with a secret past, a self-driving robot car, a genetically modified clone with a heap of emotional baggage, and our hero - Frankenstein, a mysterious driver who has survived wrecks and won a lot of previous races.

All in all, like a lot of these movies, you have to give in to the mayhem and see what the filmmakers had in mind.  Much of it is nothing new - nothing that wasn't present in The Running Man, so it's in the curious details of the movie where you can find something interesting.  If Panem seemed a little off the wall to you, it isn't a patch on the unsophisticated nihilism of the UCA.

To point out that the movie's effects aren't great isn't useful, or maybe even that the plot sort of gets away from the movie with characters just sort of ending rather than completing arcs.  It feels like some missed opportunity there that a little extra time with the script could have solved.  But if you want to see something just utterly unafraid of what people will say or think - it's kind of fun to watch.

I'll need to watch this one. I've only seen parts of the original Death Race, but from what I saw it was good. I don't want to spoil the ending of that one, but I'm curious if this 2050 version is a direct sequel or more of a reboot of the original.

I watched this last night. It seems like a reboot of the original Death Race. However, Frankenstein's character has severely changed. In this new version, his character has an actual arc, but it comes about because someone suggests something that captures his imagination, whereas he has the same goal in the original, but he had it planned out from the beginning.

Universal's distribution arm must have been out partying with the Corman people and agreed to all sorts of things in a 3:30 AM drug-fueled conversation.