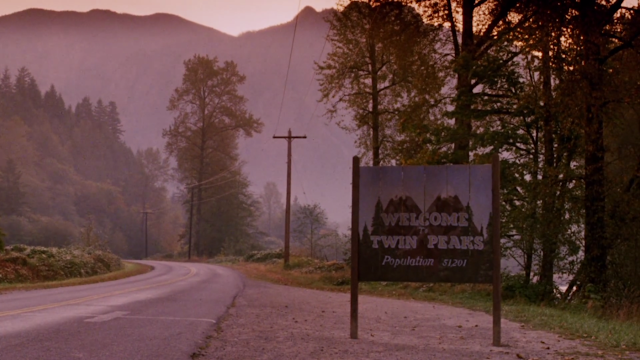 
I am sure there's an oral history or a written one of how Twin Peaks ever made it onto the air, but I have to assume it included a whole lot of people at the network not caring or paying much attention, and probably a quixotic champion trying to bring something new to the masses.  Certainly the fact that the first episode aired in April of 1990, when networks focused all year on getting the good stuff out in September should tell you something.

But it's also telling how much money they had to throw around for TV shows then based on cast-size alone.  There must be twenty-five characters with names and story-arcs to keep track of within the first five episodes.  And some of those people (well, Piper Laurie) couldn't have been working at SAG scale.

I watched the show and was as into it as I was any primetime show I watched, I guess.  It was an era before DVRs, and I had a "if I'm not home to watch it, it's okay" policy rather than trying to set the VCR.  All of which impacted how much I watched the show once it was on Saturdays.  I certainly liked the show a great deal, wanted to be Agent Cooper, spent too much time pondering Audrey, and was appreciative of how different it was from most of what was on the tube.


I took my high school girlfriend to see Fire Walk With Me.  She'd never watched the show, so she was only slightly less mad than when she yelled at me most of the way home from seeing Naked Lunch.

I rewatched some episodes with JAL and others in college, and when I started dating Jamie I found out that she was a fan of the show.  We moved in together in 1998 and shortly afterward we somehow got our hands on the VHS collection of the series, and I think we watched it all the way to the end, but maybe not.

A few years ago I noticed the series was on deep discount on DVD at Amazon, so I picked it up.   At the time I didn't want to commit to 30 hours of TV, so we didn't make it that far through the DVD set before I gave up.

If it's been a while since you've seen the pilot, you can currently find it on Netflix.  It's a remarkable bit of television and one of the best two or three pilots I can think of (I will always stand by the pilot for Friday Night Lights).

For a show we remember as being about Black Lodges and dancing dwarfs and killers named "Bob", that first hour feels quirky but grounded - a tragedy rather than a mystery.  The first half hour centers on the discovery of the body of Laura Palmer and the slow unveiling of Laura's death to all of the characters who will become our focal points.  There's a very real feel of what happens when an unexpected death occurs.  Friends break down, some lash out, parents crack and crumble.  The more sensitive simply burst into tears.

But this is Lynch, and tonal consistency is made up of inconsistency.  Soon, Agent Dale Cooper is riding into town, already falling in love with the place before he's parked his car.  Dr. Jacoby is freaking out the squares and we're trying to figure out what the hell is up with Nadine.

One of the perfect oddities of David Lynch's films that he brings to the TV show is that the characters don't always share the same tone.  It can be hilarious or terrifying or simply confusing, and as awkward as it can feel - it's not necessarily artifice, after all, when one person starts shouting at no one on a bus.  That's pretty real.  It's an exploration in power dynamics that never exactly calls attention to itself.  But in scene after scene, it seems like that's what we're exploring, with the chipper, calm demeanor of zen detective Dale Cooper, a steady hand on the wheel.

But we also shift from scene to scene, with teenagers falling in love and believing it's a beautiful dream to cops stuffing their faces with donuts to crime scene investigations.  It's a bit of a wild ride, and rarely boring, even if your favorite characters aren't the ones on screen.

The cast is an odd blend of veteran actors and new faces.  I often wonder if I'm correct that Lynch has actors from his youth he quite liked or saw in a certain light - because he certainly has a particular manner of presenting the world - and was able to get them as their stars had faded some.  Peggy Lipton made her mark on Mod Squad,** Piper Laurie had years of TV and film behind her before Twin Peaks.  And of course Russ Tamblyn and Richard Beymer - or, Riff and Tony from West Side Story.  I mean, he was still casting Ann Miller in her golden years as the daffy landlord in Mulholland Drive.

I mean, you can understand the temptation, and if the studio will let you do it...

But then he also has a host of faces that have made careers (or at least made a name for themselves) from their work on the show, both young and less so.  Of course Ray Wise has never been short of work since the show, and Lynch company actors like star Kyle MacLachlan, Everett McGill and Jack Nance helped round it all out.

It's impossible to talk about the show without mentioning Laura Flynn Boyle, Madchen Amick, Sheryl Lee or (be still my teenage heart) Sherilyn Fenn.  At some point I'll properly formulate a proper theory on Lynch, characters, iconography and Hitchcockian obsession with looks for both men and women to get things oddly right.  But Twin Peaks has a particular look and vision, and that includes emulating a mid-century America of fiction and fantasy.  Beautiful, wise high school girls in sweaters, gorgeous road-side diner waitresses, sensitive motorcycle men, and cops with their hands full of coffee and donuts.  What Lynch I've seen (and I haven't seen as much as you'd think) plays in a sort of mythic America that's always just out of touch, and always throws some very dark shadows.

My memory of the show is pretty hazy, as is now the case with most things I haven't watched in about two decades.  There's a lot more plotlines and throughput on the show than you'll remember.  And some of the stuff I don't think I cared a lot about on the first go-round, and maybe the second, is both more crucial and better than I recall.  But there's also a pacing to the show that's both a product of the creators and 90's serial television.  And I don't know what the kids would do with that at this point.

We're only six episodes in, and I know I'll touch base again.

For all the imitators and shows that took inspiration since - and for all the memory we have of zig-zag floors and dwarfs dancing - the show is about character moments.  Maybe really odd character moments (Leland dancing whether he likes it or not), but it's not just being weird to be weird.  And, in fact, what we saw of the Black Lodge is a pretty concrete code for Cooper to break early on in the show.  But the show is hardly about a ghost-busting FBI agent fighting the forces of the paranormal.  While there's something uncanny or supernatural occurring every episode, it's not exactly a DC Superhero show we've got going on wherein every storyline is tied to forest goblins.

I can never tell Lara Flynn Boyle (IMDB and Google indicates it's Lara, not Laura) and Sherilyn Fenn apart.

Trying so hard not to make the obvious joke here....

I remember thinking that when I first started watching the show, but that faded decades ago. Wardrobe, make-up and complexions collided a bit for those two.

Ben and Jerry eating those sandwiches is inspired television.

Well, it was not something you were going to see on "The Father Dowling Mysteries".

As Ryan said, I watched the entire series in high school when it premiered. Many of those episodes were seen recorded on VHS as it did air on Saturday night. I've told Ryan I would stupidly watch in the dark house when I came home from being out (our house was old and creepy to boot). The Bob stuff scared the bejesus out of me.

Anywho, we also had the conversation this week of has there ever been another show *this* genuinely weird? I don't think there has. Also: I had a huge crush on Agent Cooper.

As a parting gift: a classic SNL skit.