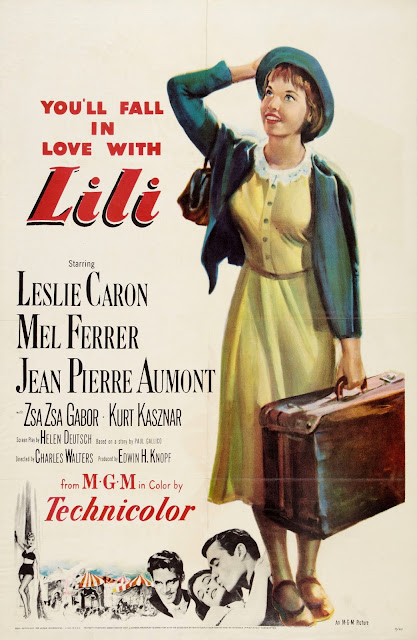 
Lili is an innocent.  She's a lonely orphan of a French girl who doesn't seem to really know any kindness, and has retreated totally within herself.  She meets a magician who helps her get a job at a local circus/ faire and equates the attention the magician has given her as a sign of love, believing herself in love with him.

She finds the magician's show so captivating (a pre-camp Zsa Zsa Gabor plays his lovely assistant), she can't stop watching when  he's supposed to be serving tables, leading to her dismissal.  The magician tells her to go back to her country town and, rejected, and very alone, she contemplates climbing a high ladder for circus stunts and pitching herself to her death.  But just before she can start her way up, a puppeteer begins addressing her with his cadre of puppets, and Lili connects with the puppets in a way she never does with actual people. 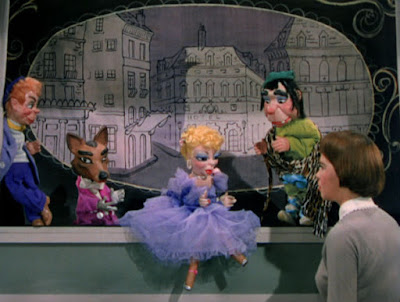 Lili's earnest interaction with the puppets becomes part of the show, and, of course, leads to greater success.  Meanwhile, the puppeteer falls for her.  Turns out the puppeteer was a great ballet dancer before the war, but was injured and unable to return to his profession when the war ended.

I don't want to tell much more as the film is fairly light on plot, and movies at a breexy pace.  For a movie I planned to just watch a few minutes of, I was an hour in before I realized how much of the movie I'd watched and set the rest to record so I could catch some Z's.

The fantasy elements don't exactly overwhelm the movie, but we do get some insight into Lili's mindset through some dream sequence-type scenes, taking advantage of Leslie Caron's terrific dancing ability.

While the story itself is simple, and I feel safe saying it's all ages, it does touch on tougher topics like the lecherous nature of some men (our magician considers making a movie on Lili), the shattered bodies left behind by war, and poor, broken Lili herself is not exactly Pollyanna.  But, you know, misery and loneliness is found in kids, too, and it's okay to address how someone finds their way out of that particular pit (hint:  it's puppets).

I could not begin to tell you why I took to this movie the way I did.  Certainly Caron is very, very good, and the characters all work as sort of broad strokes fit for this sort of picture.  It just sets out to do something in particular and achieves it very well.  And I liked a lot of the visuals of the film.

This isn't one to change your life, but it's still enjoyable, almost dreamy, and if you don't mind showing your kid a movie that may raise a few questions afterwards, this could be a fun one for family movie night.
Posted by The League at 2/19/2017 07:03:00 PM

Nice review. Thank you.
Along the same lines, I, at age 63, never thought I'd discover a new film that immediately became candidate for one of my all-time favorites. Lili did. Of course, I had a decidedly more positive experience with it than you did, perhaps because of my advanced age (!) who knows. But I did find "Lili" to be quite a profound and profoundly beautiful film. Beautiful in so many ways. Of note is the color. Not the oppressive color of typical 40's and 50's MGM productions, but a more subtle coloring, which gives the distinct impression that one is reading an old children's book that is profusely illustrated. It is very effective.

The layering of meaning and subject matter could take volumes. For here, I'll just point out that a few of matters that are dealt with are, alcoholism, suicide, rape, infidelity, and more positively, and poignantly, coming of age.

And those puppets! Highly under-valued in the West, puppets are in many other cultures, very powerful tools of expression, even of spiritual worship. They are believed to truly have lives of their own. Watch Bunraku, or Shadow Puppets and you will be caught up in the mystical spells. And even though these are rather ordinary puppets of the Western kind they seem, from the beginning, to posses a living force, (maybe as we see them through Lili's child-like eyes) and we grow to love them. They are, after all, the heros of the play, and what a wonderful choice, that the last thing we see on the screen are the puppets applauding the union of Lili and Paul.