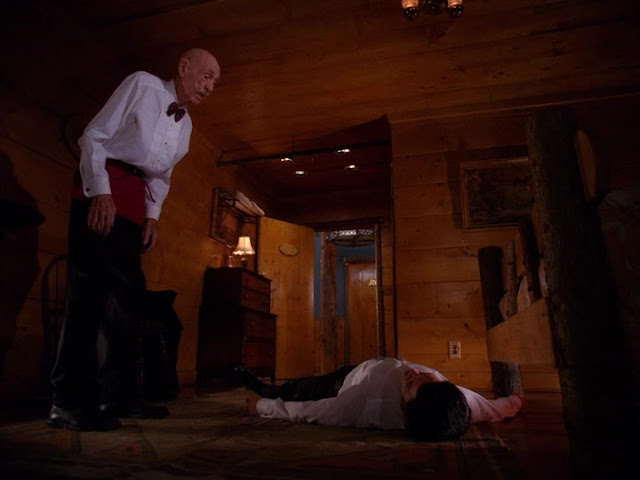 
It's amazing to try and remember that a lot of the imagery we think of when it comes to Twin Peaks was delivered in very small doses and at key junctures.  There's maybe a total of 3-4 minutes of the Red Room in the first 18 episodes.  Bob appears only sporadically.  You can count on lots of shots of Snoqualmie Falls and wind blowing through majestic Douglas Firs, but it's not like we were headed into the Black Lodge on the regular.

Heck, with the start of Season 2 the mid-century bobby-soxer inspired wardrobes for the girls and the boys in their black leather jackets began to fade for contemporary looks - a truly odd choice given how much the public had embraced the town-out-of-time vibe that was such a feature of Season 1 (I can faithfully report that girls were not dressing like Audrey and Donna in either Austin or Spring, TX in 1990).  Even establishing shots of mid-Century homes and Big Ed's Gas Farm disappear, and the show is 90% interiors and sets.

But a lot of the details disappear as well.  The stream of international visitors.  Unexplained cheerleader troupes or military squads bouncing rubber balls in the foyer of The Great Northern.

While perhaps visibly less sure of itself after the David Lynch episodes that start the season, the thru-line of "Who Killed Laura Palmer?" continues to tie everything together.  Narratively, anything could be a detail or somehow related to the spark point of the show.  And even if we know the splinter storyline doesn't resolve in anything to do with Laura's death (this is probably the 3rd time I've watched the series up to the reveal), the characters are all in something of a scramble in the wake of the shared event, shedding light into the darkened corners of the quiet town.  It all still feels immediate, and the show is too new for us to have grown weary of the soap opera aspects that often filled hour-long dramas with lethargic storylines in the 80's and 90's.

While the resolution to the main mystery is complete as a story (sort of, we can debate that statement) it was clearly rushed.  So much of what was carefully teased out simply *stops* as threads for the show to follow, stranding many characters mid-development, or leaves them dangling or suddenly irrelevant.  What role was Dr. Jacoby to truly serve at the beginning?  Was there ever to be a connection between Bobby Briggs and his pal Mike and the otherwordly Bob and Mike?

The fact that the show paid attention to the family dynamics of the Heyward, Palmer, Hurley and Briggs families as families with adults and children gets lost and everyone is treated as an adult.  The fact that the teenagers are teenagers is totally forgotten.  And the mysteries of who and what Bob might have been get well sidelined in favor of a dog of a storyline about an internal investigation about Cooper maybe transporting drugs? and a storyline about his ex-partner not simply killing him that is the inverse of the mystery and style that was the show's hallmark.

It's hard to remember what strange territory Twin Peaks occupied in 1990.  Serial television had always been around, but with three networks and a fledgling Fox network as the only real games in town, the need to appeal to a lowest-common-denominator when it came to mass appeal meant that the work of auteur-type film directors was not usually what made its way to prime time.  This golden age of television we're now living in was something I remember my brother proposing to me just ten years ago and I was skeptical then (and I have no idea who is financing it now or how).

There was no real roadmap for how to deal with either something like the surprise success of Twin Peaks or someone like David Lynch - and "leaving it alone" and "letting them work" was nowhere in the forumula when suits were looking to claim responsibility for the show's success.

It's worth noting how the show nearly slumps just prior to the reveal of Leland Palmer/ Bob as the killer, but the reveal episode is really very good television, especially for its era.  Ray Wise, who had been fantastic since the pilot, has nothing to lose here and leaves it all on the screen in every scene.

And that's one of the odd things about Lynch's work - not something I'm an expert on by any stretch of the imagination - but, his ability to keep you off kilter with, yes, the bizarre and inexplicable (the "magic" of Twin Peaks not actually part of his usual storytelling), but to still somehow have extreme but relatable characters that can produce a genuine emotion out of a scene that would be simple tricks and nonsense in the hands of another director.

Part of why I lacked an interest in television growing up - and something I wasn't able to put a finger on, exactly, or articulate - was that when I tried to watch television, people didn't act of anything resembling honest motivation.  Stuff considered the staples of TV dramas and sitcoms, and just how they worked, drove me up the wall.  People kept secrets from friends, family and lovers for reasons that made absolutely no damn sense.  The will-they-or-won't-they question said to drive most shows just made me dislike the key players and anyone holding "secrets" about their status.

Twin Peaks - until the death of Leland Palmer - plays with that whole idea.  There's a reason there's a metacommentary running with everyone's TV's tuned to the seemingly endlessly playing soap "Invitation to Love".  Practically everyone had secrets and untold stories, and maybe it is all just a dream of a soap opera - but that's where the show falters and fails once Frost and Lynch walked away.  It becomes the soap opera.  The storylines that hadn't resolved strain on, turning Josie's story into something moribund, Coop's past with Windom Earle becomes a standard pot boiler with a hokey chess story and god save us from the noir-esque James-and-the-rich-lady storyline that slogs through the mid-point of Season 2.

Entirely frustrating is that the loose connection to high schoolers and young love and romance is forgotten - except for the in case of Nadine's storyline.  Our core cast of high schoolers seemingly just stop going to school and everyone is acting like a 30 year old, right up to including just walking into bars and drinking.  But the point of the shock of Laura Palmer's death occurring with someone so young is certainly diluted (even as the show lived in that shadow zone of what we all know about the double-lives of teenagers' appearance versus what's really going on).

An interesting aspect of the show as I rewatch it with a lot more Hollywood history under my belt is not just how some of these players would go on to have careers thanks to this show, but that in addition to bringing back favorites like Peggy Lipton and Richard Beymer as leads, guest stars include folks like Jane Greer (a noir dame of the highest calibre) and Hank Worden, who used to play a sort of crackpot in Westerns like The Searchers.

I'm not entirely done with Season 2.  We have a ways to go, and while they never forgot about the supernatural portions of the show (Major Briggs' mysterious disappearance and re-appearance), the more nuanced approach seems to be replaced with a more concrete take on things.  In the last episode I watched, Bob literally reappears to say "what happened to Josie?!", which was... maybe entirely unnecessary.

I'll post again as we wrap up the series.  I know David Lynch returned for the final episode, which I haven't seen in forever.  But the damage was done. 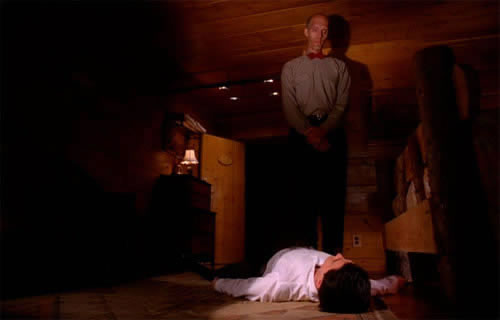