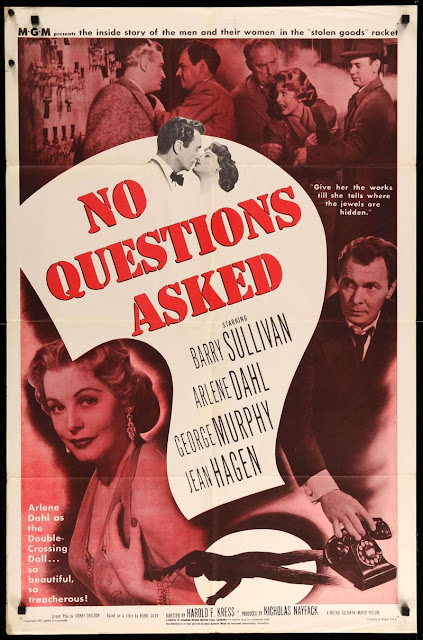 Eddie Muller and his Noir Alley programming decisions have been a master's class in the genre and by providing a focused place to catch the movies, it's easy enough to record them and watch them at my leisure after they air.  It's great to be able to trust that there's a reason the movie has been selected and by someone who isn't just plugging in well known noir favorites or randomly slotting detective movies.  No Questions Asked (1951) was another terrific noir film that I might have otherwise skipped or missed, but because I'm making an effort to commit to watching as many of these movies as possible (I mean, it's a near-weekly show, and I figure they're slotting 35 movies or so this year), it's good for me to have someone making sure I'm exposed to new films.

And, yeah, No Questions Asked is an excellent example of the genre.  Starring Barry Sullivan (an actor with one of those "that guy" filmographies), Arlene Dahl and (a personal favorite) Jean Hagen, the movie follows an attorney who - after losing his girl (Dahl) to a rich guy - figures out he can make a pretty penny as the go-between for gangsters who've stolen insured items like paintings, jewels and furs, and the insurance companies who would happily pay a fraction of the value in cash so they can avoid paying out the full value.  Of course, these deals are always struck as "no questions asked", so Sullivan can take a cut and doesn't need to reveal how he's in touch with all these underworld types.

As this is noir, of course Sullivan's attorney gets in over his head - his hubris, the unpredictable nature of the criminal world and the girl who ditched him (as Chandler would describe her, as one of the "smooth shiny girls, hardboiled and loaded with sin”) all compounding to land him in trouble he couldn't have imagined.  It's a good, tight noir story - but from the semi-offbeat set-up to Hagen's one-girl "anniversary" celebration to one of the most surprising set-ups for a heist I can think of in any genre in any era - it has a lot to offer.  There are minor character parts that I found exceptionally well played (example: Natalie, the moll and her gangster boyfriend), and it all adds up to mean there's just a lot of good stuff packed in without the movie becoming about those twists, instead elevating the already engaging story.

I don't know that much about Jean Hagen.  I mostly think of her as Lina Lamont in Singin' In the Rain and as Doll in The Asphalt Jungle.  But I can say I need to give more movies a try when I see she's in the cast.  I am aware she suffered from alcoholism and later other health issues and she passed in her mid-50's.   But when she does pop up in movies, she's just terrific.

I have only one note on the production's look - and that's that it features a brief underwater struggle that somehow the studio caught on film.  It's a great sequence that isn't exactly telegraphed, but when when it happens - it's a pretty tense moment in the movie based on the set-up.

You won't ever particularly feel as much for Sullivan's attorney as, say, the characters in Double Indemnity where you realize you're rooting for a couple of pretty terrible people to get away with something awful.  Nor is there the sympathy of, say, Sterling Hayden in Asphalt Jungle where you see him through Jean Hagen's eyes and want for him to get away with it so he can maybe live a better life.  But as a clockworks of storytelling, it's still a well built machine.
Posted by The League at 4/09/2018 08:03:00 PM