Krypton as a plot device can be a Superman story-generator, but whatever happened on Krypton that wasn't tied to Superman is, at best, literally trivia for dopes like me who ponder these things.  No matter what story or stories the show tries to tell - we know what happens right up through Lois Lane meeting Superman. All they can manage is to show stuff that might mess up the part we signed up for.

Literally, all you need from Krypton is this: 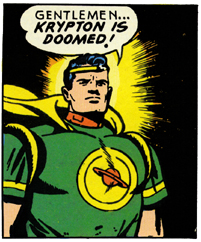 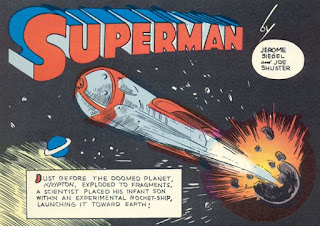 Now - anything is possible - and this is why I tuned in.  If you told me Legion, Marvel's mutant Z-list whatzit, would be spun off into one of the most fascinating things on TV, well...  I guess I would believe that more than Krypton making for a compelling space soap, but it's still a pleasant surprise.  You gotta give things a chance.

It doesn't really matter if Krypton the new TV show exists in the same timeline as Man of Steel, but it sure isn't trying *not* to be seen as part of that particular version.  There are musical cues, the "house" emblems, and more or less the "you like the color gray?  Here you go, kids!"  But in general, all they borrowed was one end of the color palette and the house crests.

I've now watched Six episodes of the show.  That's more than enough of my life to give away while I eat lunch and to form an opinion - and my opinion is:

This may be the least necessary thing I have ever watched.  And it's a throwback to not-good television of the 1990's.

Those of us over a certain age will remember shows syndicated and from SyFy's distant past - shows that had rabid fan-bases but when you got down to it often weren't really... that good.  Krypton is a return to the more melodramtically self-serious versions of these programs, but with no unique voice to give you that gem to hang onto.  It's a generic sci-fi gumbo of scenery-chewing, terrible set design, and a premise and budget that wears it's limitations on its sleeve.  There's decent CGI and clearly money for extras and costumes for the leads (background players look like they're in generic robes left over from bits and pieces of various period pieces, but with no cohesive overall Kryptonian look).  But no one thought to make the show interesting.  We shouldn't be mostly excited by Superman's cape and a low-rent version of the Fortress of Solitude.*

Not that any of the characters are a stand-out, but Sig-El, our lead, feels like someone literally just mashing down on one key on a piano.  If that's the fault of the actor or the script of uninspired direction, I can't tell.  But everyone is a generic stereotype from name-your-soapy show.  No one - not one actor - rises above the material.  It's unclear if they could.

The show cuts between multiple revolving storylines, or at least points of view of characters, all of whom feel like they're doing something urgent - but what that might be for each character by the sixth episode, I couldn't tell you.  That's probably not a great sign.  Because the idea is "stop Brainiac", but I think in the last episode the word Brainiac was mentioned maybe once?

So - the big hook of the show is that Adam Strange, a DC C-Lister but a character comic nerds love nonetheless, shows up from the future and tells Sig-El that Sig-El's grandson will grow up to be Superman.  Brainiac of the past or future - I have no idea - is headed for Krypton and Sig-El must not die/ should save Krypton, and must make sweet, sweet love to Superman's grandma, presumably but that isn't mentioned.  As our timer we get Superman's cape that is CGI-glow-deteriorating to indicate that when its gone, Superman will no longer exist in the future (which isn't exactly a big source of stress for the audience as - Superman).  The cape is vanishing at a rate that suggests it will be gone in about three hours, but for the purposes of the show, I assume it will hang around until the resolution of Brainiac.

There's a stratification of society on Krypton with rich people living in towers and poor people down below (it feels almost like Fritz Lang had a movie with a certain name that rings a bell).  There's an army of the city/state that seems to exist to just go down to the streets and push around the poors.  That army is led by the Zods, a mother and daughter who like to dramatically shout at each other.

There's also some middle-management guy and his daughter who looks like a runway model who are rich and tied to some religious figure who scares everyone even though he looks like he should be on a Fat Tuesday float.  They are bad actors and I have no idea what their storyline is anymore.  But they have lots of scenes that end with one of them staring into middle distance until commercial break or the next scene.

It's the sort of show that's supposed to be about an alien planet but - surprise - it's more or less just regular folk with rich dictators who seethe and swoosh backed by sci-fi typical military types who are about duty.  They take the idea of Krypton and use it as a backdrop for a predictable mess of pre-democractic plutocrats to keep their bootheel on the neck of the swarming underclass - until they don't or the show is canceled.  There are a few rules and regulations and Dungeons and Dragons-type ideas about houses and guilds that were never really fleshed out in the comics - just scattered for flavor for possible future development.

I almost forgot to mention Hologramps - Sig-El's grandfather who was hurled off a roof.  Hologramps is the Jor-El-like projection of Sig-El's grandpa who is there as a walking, talking exposition device.  He still remembers everything he did in life, but now he lived in the Fortress of Solitude where he's doomed to tell Sig-El what to do and why.  And he looks kinda bored and tired, even for a hologram.

I am afraid my description actually makes this sounds more exciting than it is in execution.

The sets don't suggest humanoids so much as maybe Kryptonians are insects or crustaceans who eschew light.  What looks cool in passing in a movie starts to look sort of weird and unpragmatic.  I mean, sure, if you consider the crystal castles of Superman: The Movie - that is crazytown!  But we also get a few minutes of that suggesting alien culture, not week after week of b-actors scheming and plotting badly in unlikely environs.

If Krypton of Superman: The Movie could get away with the improbable and impractical architecture of crystal pillars, it's because you only spend enough time in it to see Krypton have a very bad 24 hours or so condensed to about twenty minutes of screentime.  But seeing characters standing around dressed in gray, in gray rooms...  Someone, anyone, would presumably come up with a splash of color.  Whatever effect they were going for - it just winds up feeling all the same.  Like everything on the show.

There's an ad that runs every commercial break for Jägermeister that genuinely looks like what they were going for - but is much better conceived when it comes to world building. How does that happen?
,
I've decided to quit watching the show.  It's not good.  In fact, it's very bad.

None of it matters.  Superman will be fine.  Krypton will explode.  Kandor (where this takes place) will be heisted.  Sig-El will give birth to Jor-El.

Because everyone is constantly in a frothing tizzy and upset but can't take action or the show would end, it's all the same tone all the time.  Everyone is always very cross and will very much have an argument where they take turns bellowing their lines.   Because there are only so many main characters, you get the feeling ten minutes around a conference table would solve literally everything, even with bellowing.  It's all very soapy and self-serious and kinda lame.

I'm not sure The Flash or Supergirl are actually good shows anymore, but I feel like they're trying  Krypton just feels like a whole lot of people cashing a check by being Superman's distant relative.

The thing is - there's always someone who just gets into this sort of thing because it's on and somehow, something in the show speaks to them.  In the era before TV was actually really pretty good and there was too much to watch, hey, I watched that Kevin Sorbo space show if it was on.  Or Cleopatra 2525 (Gina Torres, y'all).  Nightman (which was unintentionally hilarious).  I once watched The Crow TV show.  There was so much of this bad stuff.

But, if you're going to make time for a comic book TV show that has nothing to do with the comics, just watch Legion.