This week we got Action Comics Special #1, a sort of coda on the Dan Jurgens run of the past two years by writer Jurgens and art by Will Conrad, an incredibly timely short story by artist Jill Thompson and writer Mark Russell and capped by a Superman and Lois quick short that was supposed to be part of the annual DC Holiday special but somehow didn't get included.  It's a strong combo of stories, even if it's yet another placeholder before the arrival of the Man of Steel 6 issue mini series leading into the main title changes.

Often these shorts by better creative teams like you see here speak less to active continuity than to thematic issues tied directly to the characters.  Jurgens turns what could have been a multi-part epic into a story that winds up still saying much about the Lex/ Superman dynamic, especially in the wake of the "Lex is calling himself Superman" storyline inherited at the start of Rebirth.  Lex's eternal rage at the Man of Steel is sometimes hidden, subverted, but here we get a quick glimpse of how pointless and useless that life spent in revenge really was.  It's a reminder of the grasp Jurgens really has on the denizens of Metropolis, and even if the stories he handed in weren't the universe crashing exploits of some of his peers, he was the one in there doing the hard lifting to keep the mainline books the architecture the Morrisons and others could work from knowing Superman's foundations were as strong as ever.

Jurgens' words and Conrad's art is some smart storytelling, and while it's hopefully not the final word from Jurgens on Superman and Lex - it feels like a personal and worthy statement if it's going to be a while before they'e able to do this again.

The Russell/ Thompson short story follows Lex as he attends the White House Correspondent's Dinner.  It references the President Lex storyline that was going on circa 1999/2000.  Any comparisons between the verbal beat down put to Lex by Lois and Clark at the dinner and Lex's decision to run for President and the grilling Trump took at the WHCD prior to running in 2015/16 is, I am sure, entirely coincidental.  But in the wake of the week when Michelle Wolf's stand-up "roasting" of politicians and the press at the WHCD, and both the politician and press's tone-deaf responses to the routine - it's stunning to see a panel in which Lois literally tells a reluctant Clark (who doesn't want to do the jokes) - "Clark, do you know why we expect people with power to laugh at themselves?  To prove they can.  Only a psychopath is incapable of laughing at themselves!  Making fun of the them to their faces tells them you think they're stable enough to take it."  (For those who think they made a comic and got it shipped since last Saturday night - no.  That line was probably written 3-6 months ago.)

There's some good flashback stuff tucked in there, some "why is Lex this way?" - and I really like Thompson's framing and shaping of these scenes.

Thompson's work couldn't be more different from Conrad's - Conrad's matching more of the illustrative approach that usually marks Superman art and Thompson following her current excellent character work with a looser line and expressive faces.  Honestly, Thompson's bit with Lex chomping on a moon-pie was a beautiful throwback to the Hostess Pie ads and, really, the way I think of Lex in the Bronze Age.  But, man, while I miss Zircher's pencils on Action, Conrad had a great approach to all the characters and a really good eye for "camera".

DC has been giving Max Landis writing assignments on Superman of late, which I still find weird since he used his connections with his dad to make a celebrity-dotted video about how much he thinks Superman sucks, and then wrote a mini-series about what Superman should be, I guess.  I don't know, it's the book I didn't pick up on principle.

The short story here follows Lois mourning the end of her car after she winds up in a wreck.  Honestly, and I hope I'm not just being snippy because I roll my eyes at Landis' work at DC, but the entire notion of Lois as sentimental about a car she's supposedly had since college felt out of character.  It makes for a cute enough Christmas story, but it's an odd fit and delivered in May...  it mostly feels like a reminder that DC realized they didn't have content for May for Action or Superman and they needed to get some specials out, pronto, so they dug around in the "unused pages" drawer. 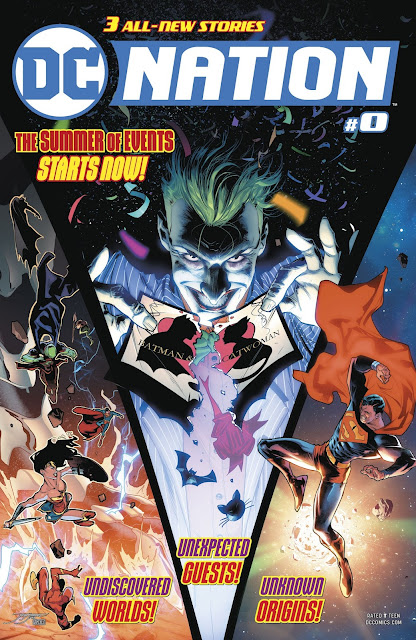 I saw some weird chatter about this short story on twitter on Wednesday before noon.  Which - (a) don't spoil comics for people who haven't been to the shop yet.  It's bad form and some of us have work from 9-5, or don't necessarily make it to the shop for a couple of days.  And (b) you guys need to learn that sometimes stories have what we call "dramatic tension".

More or less a Free Comic Book Day book that came out on Wednesday and cost a quarter (I would like to hear how this didn't end up as a FCBD offering, because it sure feels like it) - it's mostly an issue here to convince you to pick up Superman, Batman and Justice League comics more than providing actual stories.

You can read the entire DC Nation #0 issue here.

The Superman section was penned by Brian Michael Bendis and drawn by Jose Luis Garcia-freaking-Lopez (inked beautifully by Dexter Vines), it's a quick teaser to let us know in media res that the continuity we can expect with our next issues of a Superman comic will have some mysteries to work with right from jump.  Lois Lane is not at the Daily Planet and as far as Perry knows, she's off writing a book.  Clark seems unhappy about whatever circumstances are afoot, and there's a new superstar brought into the bullpen by the name of Robinson Goode, who seems to have a shady agenda and connections.  And whatever is going on with Clark's punchy prose style seems to have left with Lois.

Perry is depicted as Perry, which seems like not such a challenge, but it is a reminder of what people are actually looking for in the press, or a reminder of its actual function - something us olds actually recall.  That Bendis uses Perry as a mouthpiece to criticize current clickbait trends of journalism via providing baseless "warnings" and instead holding up facts and truth - I can support that. Especially if it's repositioning Superman in opposition to the Injustice/ Batman v Superman/ name your "Superman gone bad" versions of the character.

It's enough of a taste for me to want to see what happened - where *is* Lois?  What's really happening?  But without the morbid weight of the Azzarello/ Lee "For Tomorrow" set-up (in which a million people up and disappear with no explanation and was a mess of a story).

I don't entirely get what the kids were freaking out about unless they somehow mistook Lois' absence as some permanent state of affairs.  Which...  kids, it's gonna be okay.

It's tough to say much about these pages as they are just a teaser and there's a few things I'd prefer not to give away if you're inclined to read the comic yourself.  I'm not sure it will do anything in particular to attract new Superman readers, certainly not more than the name of Bendis, but it's also actually *good*.  Decent characterization, solid dialog, brisk pacing, character moments and enough to get me to want to turn a page to learn more.  That's not nothing.  And a reminder that JLGL can still knock it out of the park when they give him an assignment.

It is some tonal whiplash after the prior Batman/ Joker story.  The following Justice League story does not, exactly, have me thrilled about the upcoming mini-series.  I feel like I've read whatever this is about fifteen times in different ways.  Come on, DC.

I think the worry is that Bendis will sideline Lois for this new character. I have no opinion as to whether this is a justified concern. I mean, we're not even a full issue in. On the other hand, some folks point to Bendis having a history of focussing on his original characters at the expense of established ones.

I would be positively shocked. I haven't been following that much Bendis news, but he's already talked about Lois' place in Superman comics and the DCU in pretty specific terms. Given how much Lois' absence is the entire fulcrum of the story, this seems really, really premature. And based on what little of Bendis' use of established characters has been in my reading - this concern would never surface. But, we'll see.