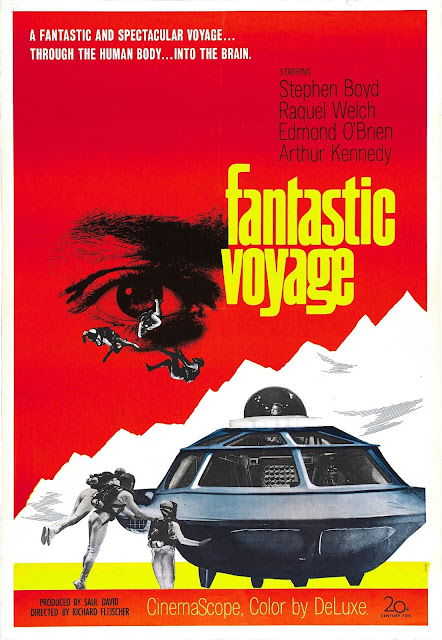 Way back in middle school, one of my favorite teachers - a science teacher named Mr. Whitbeck - showed us The Fantastic Voyage (1966) in class after a section on human anatomy.

I absolutely loved it.  Which, you know, how many movies did you see in school that you loved?*

Despite the fact it was a pre-Star Wars film, the FX were stunning, the "race the clock" plot gripping, the mix of fantasy and pure science made me feel super-smart for watching and saying "hey, I know what a white blood cell is!"  And we had a great mix of actors I realize are 95% white guys (Arthur Kennedy!  Donald Pleasance!) all anchored around Raquel Welch cast as a polite doctor.

When I returned to the movie years later, I expected to find fault with the film, and it doesn't really matter how many times I watch it - this thing holds up.

The film starts as more or less an espionage movie - someone is flown in discretely to an unnamed US city, and handed off to G-Men in black cars.  While motorcading to their secondary location, the cars are attacked by "the enemy" (Commies.  It's Commies.), who wind up not directly hurting their target, but he does hit his head hard enough that he suffers an interior brain clot.

Our POV character is introduced to the situation - last seen handing "the package" over to the G-Men.  He's a sort of he-man super spy, Grant (Stephen Boyd), but he doesn't know about this super-secret operation - a well-funded attempt to miniaturize items and people, a la Hank Pym and the Pym Particles for us comics nerds - apparently there's a shrinking race going on between the US and USSR.

Grant meets his team, the boat's captain, two doctors and Cora (Welch).  Boarding the coolest boat since The Nautilus, here - The Proteus, they are shrunk down and injected into the body of the scientist, setting sail to cut the clot out of the man's brain.  Complications ensue.  Oh, and they only have an hour to get it done and get back out before the shrinking process ends and they return to their normal size and mass - which is a messy thing if you're inside someone's skull.

I love that the movie starts with such a concrete, grounded look and plot and then throws the gears and puts us in the sci-fi world literally right under our feet.  It treats the material as deadly serious, with only the cool, dry jokes of Grant to let us know how bizarre all of this is - which actually evaporates once we're underway.  Because of the timeframe of the set-up, the last hour of the movie is more or less a real-time unspooling of events, and every set back, every detour just adds to the white knuckling of what's already a Hail Mary of a mission.

Again, those visuals are stunning.  As much as I like The Time Machine and its way-out sets and make-up and the actual underwater stuff in 20,000 Leagues Under the Sea, the lack of frame of reference for the interior of the human body at that scale makes for a wide range of landscapes and visuals that at least "seem" to have some basis in some version of reality (even if the source of light in much of the movie remains mysterious).

I'd love a less-all-white-dudes-over-40 remake of this film.  It's not that the current movie doesn't hold up - it does, with gusto - but I don't know the last time you walked through a hospital or science department, but that hardly describes who is there solving problems.  While notable that Welch is both the only Hispanic and woman with speaking lines in the movie, we can probably do better.  But, hey, at least the cast don't spend the hour voyage leering at Welch.

Plus, yeah, I'd love to see a modern spin on all of this.  And, no, I don't mean Innerspace, Stuart.

There's something to be said for sci-fi when it's focused on the science or concepts.  I love Star Wars, but it's fantasy, and Star Trek hasn't been interested in exploration since Star Trek: The Next Generation went off the air.  There's a certain charge to sci-fi when, even if a bit wonky or askew, the concepts have some grounding (take Arrival).  I don't believe we'll displace mass and shrink anyone any time soon, but the human body is, indeed, a fantastic location to explore as alien territory, and I like the notion that the very meatsacks we live in are as unknown as space or the depths of the ocean.

*a few.  They showed us 20,000 Leagues Under the Sea in Elementary School and in high school they showed us The Man Who Shot Liberty Valance for absolutely no reason whatsoever.