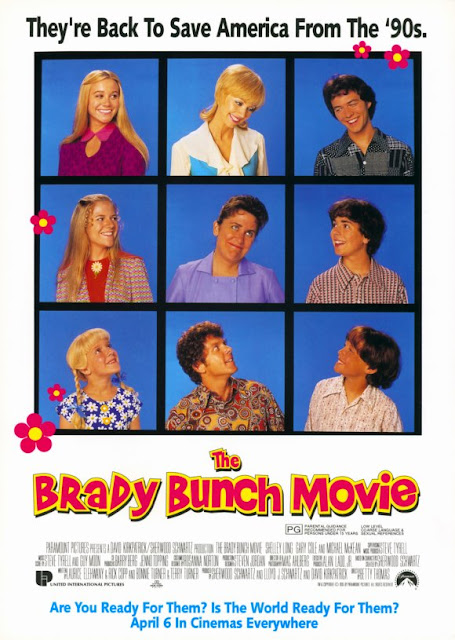 
I refuse to explain the Brady Bunch TV show.  I am certain that Millennials are generally aware of the show, but did not grow up in an era when you had 4-5 channels and some sadist at your local UHF channel chose the products of Sherwood Schwartz as reliable stand-by's for any hole in the schedule where adults might be washing dishes or looking away.

Further, once we all did have cable, the budget wasn't really there for much original programming, so all it meant was an escalation of Brady Bunch reruns across the spectrum, more or less 18 hours per day.  The kids today have no idea what it means to grow up in the refuse of the prior generations.  I mean, we had our own stuff, but we all sorta walked around with a knowledge of reruns of about 2-3 dozen shows that survived into the 70's and 80's.  Frankly, I didn't watch much prime time TV growing up, so most of my non-cartoon TV intake was stuff like 5:00 PM episodes of WKRP, The Jeffersons and Mr. Ed.

I don't think we saw The Brady Bunch as dated in the manner of Leave it to Beaver so much as, once we hit age 11 or so, we found the show completely insane.  It wasn't an obvious cartoon world like Gilligan's Island (how has that not seen a reboot?) and it wasn't even clear who the show was aimed at.  Really little kids?  Older kids with no tethers to reality?  But it was on, and, thus, we watched it, usually waiting for whatever came on next.

By the late 80's, there was a wave of Brady-mania as the show had become a multi-decade cultural touchstone/ phenomena.  Reunion movies, including a Brady wedding and then a Brady Christmas Special aired.  The now-adult actors wrote tell-all books with juicy details (Greg went on a date with Mrs. Brady!).  And it really carried on til one of the Brady actors married someone from America's Next Top Model and it descended into reality show hell in the 00's.

Sherwood Schwartz could have dug his heels in and insisted his show remain the same, but never one to turn down a cash grab, he let other people take on the show and turn it into a movie.

With no apologies, The Brady Bunch Movie supposes the show is happening now (1995 now) in a Los Angeles suburb, wholly intact.  No explanations given.  What sounds like a five minute SNL sketch somehow (more or less) manages to work for the runtime of the film as it simply treats the Brady family as a bunch of weirdos, cheerfully oblivious to whatever it is that separates them from the wider world.  Inside the confines of the Brady house (and yard) the movie recreates the set, shots, costumes and tone to such a degree, I recall seeing it the first time the jolt of a reminder that this was a movie every time they'd snap back to an external scenario.

What was likely thought as period differences between the 70's and 90's by us youths who caught the movie in the theater still work pretty well thanks to the concept hanging much more on "Brady World v Real World" than some notion that the 90's were super awesome.

The casting is also pretty remarkable.  Gary Cole - one of the most underdiscussed, underappreciated people in movies - absolutely nails Robert Reed's Mike Brady.  Shelly Long's comedic chops are used to perfection as Carol Brady, and literally all of the kids (and Alice!) nail it right down the line.

And thanks to that acting talent, some of the best bits of the film are the characters earnestly selling the insanity of the Brady's, both pulling bits directly from the series as references and adding business like Mr. and Mrs. Brady's apparently ribald sex life and Jan Brady's Marcia complex driving her slowly insane.  It's all stuff that makes sense in the context of the show, but I'm not exactly sure would make a lot of sense to the kids who didn't spend hours picking apart a family that engages in potato sack races on their astroturf lawn.

Supporting talent includes the equally great Michael McKean and Jean Smart as the next door neighbors, at least three Monkeys show up in various sized roles, Marissa Ribisi, and a handful of cameos from various Brady original actors, including Florence Henderson as "Grandma".

I don't know (or believe) this is a *great* movie - but it holds up way better than I'd believed it might.  Directed by Betty Thomas, it's a weird perfect recreation of a vibe unique to a certain show from two decades prior, and she handles both the homage to the show and the slam-cuts into reality with a deftness that's hard to pull off and keep things actually really light and funny.  There are four writers listed, and I don't know who did what (who ever does?), but maybe that blender of different ideas is how we wound up with the movie we did.

More than two decades on, I have no idea what a 25 year old would make of the movie now.  What's even odder is how many people from that movie have passed, from Florence Henderson to Ann B. Davis (Alice) to David Graf, the guy who played Sam in this film.

But it also feels a part of a particular wave of 90's comedy that was pretty big at the time and that I'm not sure we know how to do anymore, even as we reboot and reimagine everything under the sun.
Posted by The League at 6/24/2018 10:59:00 PM