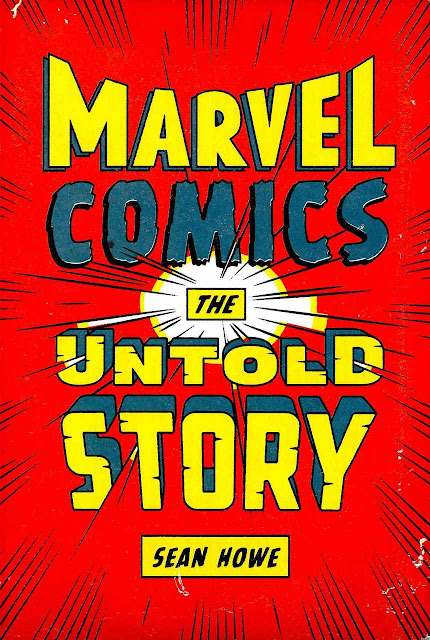 
The book also can only go so far.  Writer Sean Howe had to pick a point in time and say "this is as far as I'm going", and I think the cut-off is roughly 2008.  Which is plenty of Marvel History.  When Stan passes, as Ditko did the week of July 5th, 2018, it may well be that Howe could do a follow up or second volume, and I'd more than welcome such a work.  A lot has transpired in the intervening years, what with Marvel putting out 20 movies and vindicating Stan's vision, even as Stan himself has fallen upon hard times.

Marvel Comics: The Untold Story is a shockingly readable, gripping account of Marvel's history based on interviews with hundreds of people, deep research, and impressive synthesis of a history where many of the players were alive to present multi-faceted versions of the sprawling events at a single company.  A company, I'd hasten to add, we all think we understand, sorta don't, and probably regard with equal parts love, aggravation, a bit of eye-rolling and cheer.

Howe really seems to have pulled together not just a complete picture, but a fascinating and dynamic overview of the events, personalities and forces at work that shaped Marvel in a push-pull of creative energies and market forces from its very inception.

Jamie asked me if the book was any new information or just a retelling of stuff I knew*, and I'm happy to say the book contained a treasure trove of new info, context for existing info, and a panoramic view that pulls things away from my personal gripes as a reader and consumer and frames it from the POV of Marvel staffers.

From the stone-age days of comics and the post-Action Comics #1 rush to cash in on this "superhero" phenomenon, to Stan being the only guy working in the Timely comics office all the way to "oh, Christ.  Jemas.", it's a story told in eras via anecdotes, what was hitting the market and why.  A small company that allowed for some creative mind-expansion in the offices to Ike Perlmutter's infamous draconian tactics.  And if you're an 80's kid, hearing about the behind-the-scenes around Jim Shooter explains a hell of a lot.  For 90's kids - the frankly foreseeable issues that surrounded the rise of Liefeld, Lee and Image (that still reverberates in the halls of DC, if nowhere else) and all that transpired is kind of mind-blowing.

I won't say no rock goes unturned, there are a few places I would have liked to have learned more.  To Howe's credit, despite some bitter recollections, the book is not so much gossipy as trying to sort the facts from people who aren't the easiest interviews and who may have a lot of emotion tied up in what transpired as creativity runs afoul of business again and again.  And, like it or not, that's sort of the history of comics - starry-eyed artists and writers toiling and bleeding for a company that will own their work and who has no investment in giving them credit or financial compensation beyond the terms of the work.

There are times I wish Howe had stopped to explain the math around comics a bit more.  It's an industry where publishing is secondary in profits to the licensing, toy and visual media sides of the business.  And to hear some creators on the publishing side are making 100's of thousands while you know damn well many-an-artist is living on poverty wages, and executives are living in tony townhouses...  a bit of it could have been better explained.  Other than that, as in all entertainment, none of the numbers really make a lot of sense.

But for a string of personal stories telling what was going on and how it all affected the bigger entity that was Marvel through 2008 - it's going to be hard to beat this book.  Certain threads get maybe more coverage than makes sense in the grand scheme of things - it feels like we spend more time on Howard the Duck and Gerber as an illustrative example than we do on X-Men - and there are a few million alleyways Howe could have explored but lacked for time or it didn't really fit the "overall history" of Marvel angle, but I'm afraid I'm making it sound like this isn't a gripping read full of great anecdotes that lays out "what happened".  It is that.

But for all of us who take to twitter with our opinions and evidence-by-osmosis to back it up, it doesn't hurt to have a book to read to get a better idea of what we think we're talking about.