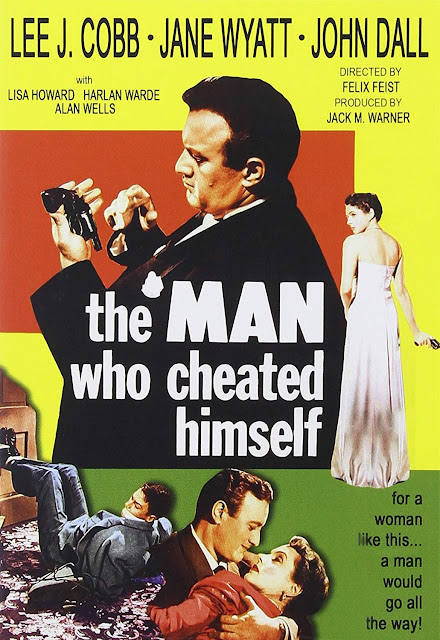 A tight, low-budget crime cops and crime noir - The Man Who Cheated Himself (1950) has a terrific set-up, some great cinematography, and a cast of recognizable talent it somehow manages to cast against type in all three major roles (your mileage will vary whether you think this works).

Lee J Cobb plays a San Francisco homicide detective proudly overseeing his brother's (John Dall) transition from beat cop to joining him in the detectives bureau.   He's seeing a married millionaire heiress on the side (Jane Wyatt) whose husband is aware of her dalliances, even if he doesn't know the specifics.

Wyatt's heiress realizes her husband has purchased a pistol and determines he's sure to murder her, so she calls Cobb to her house, believing her husband has left for the airport.  While she's showing Cobb the gun, the husband returns and Wyatt - hysterical - puts two bullets in her husband.  Cobb decides to leave the body at the airport to throw the cops off the scent - make it look like a robbery gone wrong.

Sure enough, Cobb and Dall are assigned to the case, and things get messy.

While plenty is shot on sets, there's some use of San Francisco, not the least of which includes Fort Point, recognizable to fans of Point Blank and Vertigo, but the use here is far greater as characters play hide and seek inside the structure in a beautifully shot, mute climax.

While casting Lee J Cobb as a rakish ladies man who could woo Jane Wyatt should give all us less than stellar-looking fellas some hope, it's some odd casting.  As Noir Alley host Eddie Muller opined - Wyatt isn't anymore at home as the femme fatale in this movie than Cobb fits the bill for the Victor Mature role.  You can envision Mature in almost any scene and it makes far more sense.  And Dall's budget Jimmy Stewart routine doesn't sell particularly well, either.

Still, I dug the plot and the look of the film, even when it wasn't always working.  There's enough to keep you invested and not quite clear on how all of this is going to resolve itself that there's tension straight through to the finale.