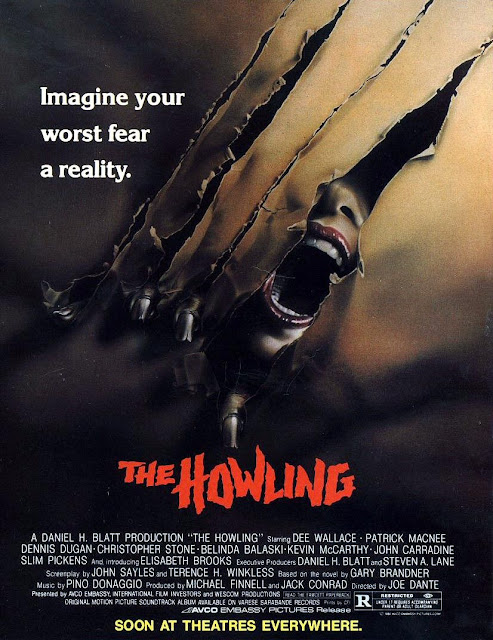 
I've seen The Howling (1981) three times now, and twice I thought I was about to watch Wolfen, which I've never seen.  So, y'all, don't be shocked if there's a Wolfen write-up incoming soon.  The Howling I caught in high school, edited for TV, but still good.  Then, about ten years ago my brother, Jamie and I watched it in the lead-up to Halloween.

Anyway - I like The Howling well enough.  If SimonUK and I complained on the PodCast that there aren't many pretty-good werewolf movies, this is one of two or three that are out there that I've seen.  The casting is stellar, the script by John Sayles (and someone else) is really smart, especially for how influential I think it's been down the line.  I know it's an adaptation of a book, but...  anyway.  A cult of werewolves living on the fringe of society and trying to figure out their place has shown up in a slew of movies the past two decades, right up to the Twilight franchise.

If you've not watched Matewan or Lone Star, back when I was in school, those were two of my favorite movies.  Matewan, at least, is hard to come by these days, which is a shame.  Neither is discussed much, but back in the 90's, man, we all loved John Sayles, and I've always been fascinated with how he swung between genre pictures and then these intense, very localized dramas.

Of course he didn't direct the movie - that's Joe Dante, and, man, he's really pretty good at this young age.  This isn't the easiest movie to handle, and I think he manages to keep it scary and never feel too campy when it easily could have felt absurd.

The movie also stars a ton of people you've heard of, from Voyager's Robert Picardo, to the all-purpose Kevin McCarthy, "that guy" Dennis Dugan, and, of course, the always terrific and nuanced Dee Wallace.  We also get John Carradine, Slim Pickens, Dick Miller, Patrick MacNee and anyone else Joe Dante could drum up.  And, we all remember Elizabeth Brooks as the "clearly I'm a werewolf" lady who could convince us that maybe it wouldn't be all bad to join the legions of the undead.

In addition to a pretty solid concept (and a great hook for an opening), the movie also provides more or less the gold standard (or shall I say... silver standard?) for werewolf design that's been tough to top in the ensuing 40 years.  You will not be shocked to see Rick Baker's name in the credits.

Still, it is not Wolfen.  So, now I need to watch Wolfen.  And probably some Howling sequels.

I would advise against the Howling sequels.

Look, you say that, but I see that Reb Brown is starring in Howling II with Christopher Lee, and...