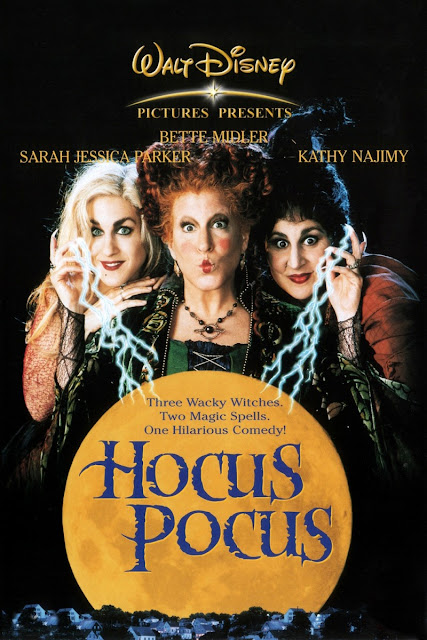 Millennials, I feel like we need to have a talk.  I understand that you were mostly raised by distracted parents who left you with a VCR or DVD player and no limit on the number of viewings you could take in of any movie, so long as you didn't interrupt whatever your parents were up to.  And, believe me, I understand the power of nostalgia and re-enjoying a movie that takes you back to your past, when things were simpler and life was all Capri Sun pouches and sugar cereals.  But right now, the two movies I keep seeing you defend - arguably unironically - are Space Jam and Hocus Pocus.

In 1993 I was 18, adjusting to college, trying to land a date with the girl in the Italian class I was busy failing, and didn't make time to leave campus to see Hocus Pocus. The movie has appeared as a streaming option every year, and I've considered it.  Lately - as noted above - the kids have rallied around this movie, naming it a Halloween holiday classic.

Honestly, my suspicion is that at one point, Hocus Pocus was a very different, PG-13 to R-Rated comedy aimed at high schoolers or older, and somewhere along the line, some of it got changed to make it for little kids.  It happens.  Especially at Disney, which turned a gritty drama about a rich bachelor and a hooker into Pretty Woman.

This is a movie for, I guess, 7 - 11 year olds that spends a huge amount of time humiliating a teenage boy for his virginity and the entire fact the story even occurs is that our male lead's little sister (a weirdly young Thora Birch wearing lipstick for some reason) tells the love interest that he likes her boobs - which literally makes no sense in the scene.  This information is so appealing to the high school junior (and not at all appalling or awkward) that she joins them on an adventure that will include some B&E.

But, yeah, every ten minutes this movie brings up the fact a 16 year old isn't getting any ass like he's some sort of freak.  Look - I get that teenagers have sex and we were all way more free-wheeling with this idea in the 90's than now - but it's @#$%ing weird in a Disney movie for adolescents.

It's also just a sloppy mess in the way kids' movies were in the 1990's when they weren't making, say, Babe.  Not everything needs to get Oscar nominations, but it really just seems like they couldn't be bothered to spend ten minutes at the writer's table coming up with something less stupid.  Example:  The plot also hinges on the fact the older brother has to take the young sister out trick-or-treating because the parents have abandoned their well-decorated and therefore should-be-dispensing candy house and giddily costumed 8-year-old child for an all-night party.  Sure, if parents were around the kids wouldn't have an adventure - but movies have handled this issue with less parental neglect all the time.

Part of me wonders if this party was, in an earlier draft, a far more adult-ish party the kid has to run through (next time you watch it, what are the parents doing?).  And maybe that was director Kenny Ortega (High School Musicals 1 -3) sly, coke-filled wink to himself?  I don't know.

It's just one of those movies where they never build on the premise, no stakes are raised, and it just goes on and on well after the "we get it" part of the movie.

Oh, and when the main characters mistakenly believe they've killed 3 beings of the supernatural who were nonetheless people, they just sort of react like they won a soccer game that will put them into the play-offs.  And then the lead guy and girl spend the night together.  'sweird.

The production is reminiscent of the era's mid-budget (low budget by today's standards) wide release films, including a certain blandness masked with good locations and hyperbolic set dressing, all of which - as Jamie smartly pointed out - Hallmark Channel has co-opted and continues to use for its Christmas films, though with far fewer crane shots.  The score by Horner is, again, of its era, and doesn't bother with anything like creepiness in favor of perky musical cues that riff on any of five dozen family comedies of the era.

I have no idea what direction Kenny Ortega gave our three deeply talented witches, but somehow they wind up basically playing ABC Family Halloween broad cartoons, which is fine, I guess.  It's just not anyone's best work and a waste of Kathy Najimy, Bette Midler and SJP.  What's most odd is that their business never feels like it's directed at all.  They sort of mumble and talk over each other and try to get lines out between big, fake teeth.  There's some bit where they all hike up their skirts and walk in unison, but I have no idea what that's all about.

And if anything left me wondering, it's the foray into the home of Gary Marshall and Penny Marshall (playing husband and wife?).  It just feels like something either left over from another movie or improvised and left in despite the fact it really doesn't work and slams the story to a stop for no reason in a movie that requires we keep going.

All of it just overlaps to such a degree that you lose specificity even when you can tell the three witches are killing themselves to get their clown characters across.

As the movie crept to a close, what really struck me was: the movie was not funny.  Nor scary.  Nor much of an adventure.  By 90's standards, it's kids-friendly, but now it's likely got some issues.  But mostly, as I was not a child of the generation when this hit VHS, I have no perspective on what there is to like about this movie.  I don't know if the kids are watching it ironically, nostalgically, or what... but it's... not good on many, many levels.

But it does star a young Doug Jones as a plot-device zombie, so... there's that.

This was the worst movie I've seen in a long time. And we watch some real crap sometimes. There was stuff happening, but it was just incredibly boring with some truly annoying characters. The little sister (I don't blame Thora Birch for a terrible script) was a brat who tried to get her brother killed and then cried when he wouldn't fight back.

Also weird: the parents going to a throw down of a party on their first day in town? They were still unpacking that day. What shitty parents abandon their kids after a cross-country move like that?

Yeah...I don't get it either. For a more recent and super fun kid movie, try Monster House. I was super impressed by it.

This is my second rec for this movie, so I'll watch it! Maybe tonight, even! (yes, I am Snagglepuss). It was on last night, but was ten minutes in when I found it.