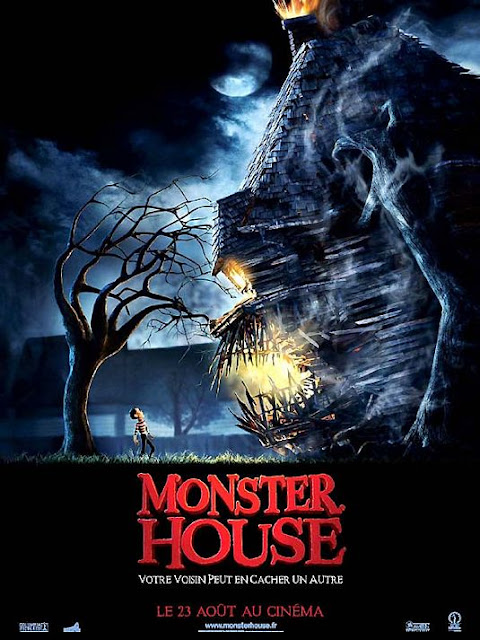 
What a weird, mean-spirited animation test this was.  Man, it's hard to see CGI cartoons from this era not produced by Disney or Pixar and not find the character designs and camera work all a bit...  well... we were still figuring things out.

From what I can tell from watching and reading between the lines of he production history on Wikipedia, Monster House (2006) seems to have been part movie/ part pilot for 3D motion capture technology - something that has since brought us 3 stunning Planet of the Apes films and a Thanos, but which had already brought us Gollum - so I have no idea.  In it's way, the experiment paid off - the characters really do have some nice, natural movement - it's just weird because it doesn't feel... cartoony.

Certainly the impact of the animation + motion capture kicks into gear somewhere around the 50 minute mark when the kids enter the house, but prior to that... perfectly captured kids just moving around starts to make it feel a bit like we're entering uncanny valley territory, and genuinely makes you wonder why they didn't just shoot kids doing the things.  Also - actions performed which can be cartoonishly funny when someone does them in real-life on the screen can feel like "why is he doing that?" when it happens in a cartoon and everyone is moving in real-time.  The zing of the action gets drained of life.  Study your Chuck Jones timing, people.

When the movie finished and the "written by Dan Harmon and Rob Schrab" credits rolled, I felt like I got some insight into what occurred here.  It's not like we haven't had plenty of Dan Harmon out there, and I've kept one eye on Schrab since picking up his mid-90's comic Scud: The Disposable Assassin back in the day.   I won't say Harmon and Schrab aren't talented - but I wouldn't associate either with stuff for kids, and... you know, maybe I just wasn't in the mood for it when we watched, but the usual "poor put upon protagonist" stuff from *those who hold power* just seemed bizarrely mean - like, to the point where it's a little difficult to buy no one ever called the cops on mean ol' Mr. Nebbercracker.  Or indeed, if an old man keeps screaming at kids and threatening them and taking their stuff - where's that one mom with the temper showing up to kick his ass?

I did watch this movie on the advice from at least two readers that it was better than Hocus Pocus, and it was.  So... rather than nitpick at a movie a lot of people like, I'm going to shut up about it.

Like Avatar or whatever - it's one of those things that was pretty cool at the time but has aged poorly.  The neat tricks that kept the audience going don't hold up, and a lot about the production looks really amateurish and messy from today's perspective (here's a thing: stop moving the damn camera).  It received a ton of awards and nominations, the reviews are uniformly good, so at least at the time people were happy to see a non-Disney movie that wasn't just horrible (there were a lot of them coming out at the time, all lost to history at this point).  But... yeah.