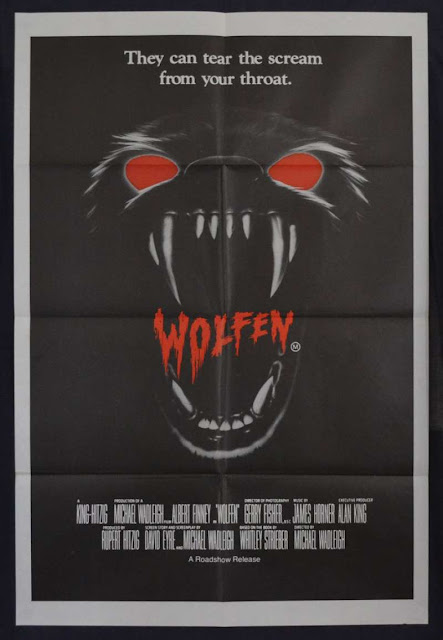 
Well, I finally managed to watch Wolfen (1981) instead of The Howling.

There's probably a lot to recommend Wolfen, and in 1981 I am absolutely positive that the film was an interesting twist in the horror-fantasy genre that's been lifted from since.  Ebert himself gave the movie a strong review.

You can't complain about the cast.  Starring Albert Finney as a detective looking into an inexplicable and gruesome murder of a real-estate tycoon, his wife and bodyguard.  Gregory Hines as a savvy coroner.  Tom Noonan as a quirky zoologist.  A surprisingly young Edward James Olmos as an ex-con high elevation construction worker.  The ubiquitous Dick O'Neill as Finney's boss.  Diane Venora plays a psychologist/ "the only woman in this film".

Finney's investigation takes him down an unexpected path - the only clue on the bodies bits of wolf fur.  That it's *something* wolf-like performing the carnage isn't ever in doubt as the movie is the first to deploy the thermo-vision that Predator would own and day-for-night shooting to create certain FX.  That said - the FX are mostly in-camera and practical.  This isn't a Rick Baker make-up film.

The film is a slow-burn mystery, and in modern hands would run tighter.  This was the first narrative film by Woodstock cinematographer Michael Wadleigh and would drive his exit from the film industry when things didn't quite work out during production of this movie (guys, I am all for slow movies... I think Stalker is a swell idea... and this movie drags).  There's some good visual stuff beyond the thermo-vision, including some wobbily symbolic multi-point reflections and curious use of some burnt out-street corners of the late 1970's in the Bronx.  (Y'all, NYC was a real hole during this era).

All in all, I'm glad I watched it.  It wasn't what I figured on, and I guess for-re-watchability I'd say The Howling has more fun to offer.  But it does try something new, treats the material with a certain gravitas that never leads to eye-rolling, and stops short of going into concrete explanations, which I think makes for a better movie.

1)  According to imdb - James Horner came in as a substitute at the 11th hour and re-scored the film.  What's weird is how much parts of the score sound a bit like his score to Aliens.

I mean - drop this track in anywhere with the Aliens soundtrack and it would fit pretty seamlessly.

2)  Uhhhhh... so.... the movie opens with a pair of billionaires - the scion of an old-money family in an American Metropolis getting nonsensically murdered, and I couldn't help but note that the wife's pearls get some real attention as they spill from her neck.

Guys...  my fellow comics nerds...  we may have all been really moved by a scene lifted from Wolfen.