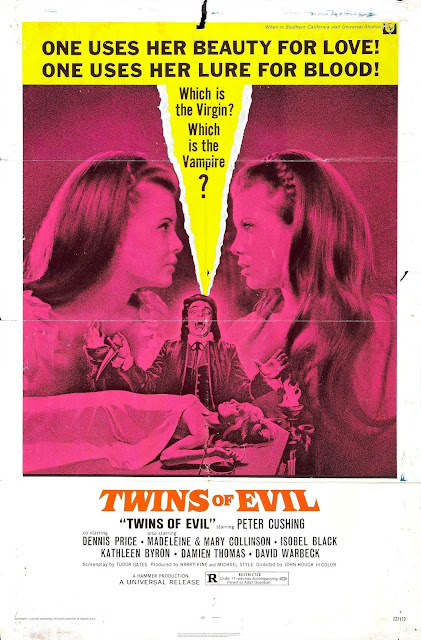 Twins of Evil (1971) is the third in the Karnstein Trilogy of vampire films from Hammer, the two previous films included The Vampire Lovers (which I really liked) and Lust For a Vampire (which I swore I'd rewatch more closely and haven't done, so...  I'll get on that).


Actually, this one is pretty okay!  I mean, it is not the guy playing Karnstein's fault that I think he looks kinda like a less dopey Jimmy Fallon. 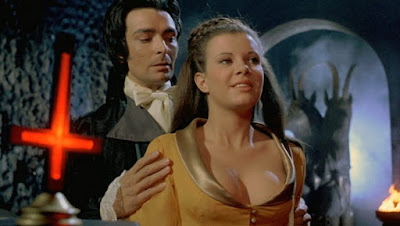 The basic plot:  A village of religious zealots is stirred up into a hornet's nest because the Count living up the hill in a huge castle seems to be up to all sorts of nonsense but he's protected by the Emperor.  Should anyone go after the Count, the Emperor will come down on them like a bag of hammers.

At this point, Karnstein is super-alive but he's also a legit devil worshipper trying to get Ol' Patch's attention.  Through some good 'ol fashioned ritual sacrifice he raises his dead wife from the grave and they both become vampires.

Peter Cushing plays the head lyncher of the God Squad who has twin nieces arrive from Italy, dressing all sassy and without crippling notions of modesty and fearing Peter Cushing.  Played by a pair of ex-Playboy Playmates (legit twin sisters, Mary and Madeleine Collinson), one twin is the goody-two-shoes and the other is the "I'm gonna break out and go hang out with a clearly evil guy because YOLO" type of sister.  Which, Karnstein is totally into, leading to her then declaring YOUO.

The movie sure seems to be the origin story for Karnstein and Marcilla, and I'm not sure how you'd argue it's not, but like all Hammer films it exists in a sort of continuity purgatory, where maybe it's also tied to Vampire Circus?  Or maybe not.  We don't know.

I kinda liked it.  It's really straightforward and not a lot of surprises, but it's got some nice imagery, creative design and well defined characters.  It's not cinema perfection, but it's still a bit of fun and Karnstein is eeeeevil even before he starts drinking blood, making the movie a kick to watch.