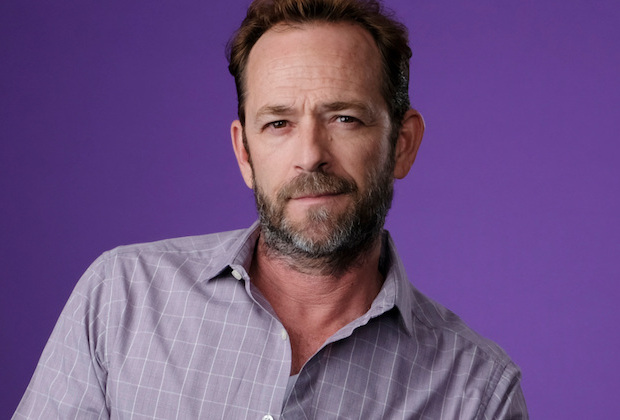 
1.  Luke Perry should have been a horrible person with a terrible personality and big head that we could all agree to hate from a cheesy Fox night time soap, when Fox was still barely a network.  But he wasn't a jerk, at least not a well known one.  And he always seemed better than the work he was part of.

We were all supposed to kind of hate 90210 - but even I, who never watched TV that wasn't MTV or cartoons - got schnookered into 90210 when I hit college and my dorm mates would watch the show and more or less riff it, MST3K style.

But, man, I cannot imagine anyone was watching the show and taking it seriously - and to this day I assume everyone watched the show with perfect Gen-X'er detached irony.  In a pre-internet world it was very heavily watched, much as we had all watched reruns of the Brady Bunch and killed time after school watching Saved by the Bell,  Thus 90210 became a curious shibboleth for people of a certain age, even if no one could rightfully say why they enjoyed the program.

When the 90210 cast wanted to move on, you wished them well, maybe especially Perry  And, honestly, he was great in Buffy the Vampire Slayer.  That no one parlayed that side of him into other work is a crime.

After a handful of shows and movies, Perry showed up playing a dad on Riverdale (I will not try to explain the show, because if you know it, you're good, and if you don't, I'll sound like a raving lunatic), and I think those of us my age who caught him on there were glad.  He'd matured into a specific kind of presence on screen, a bit of gravitas and world weariness.  Even the fact you couldn't *not* think of Dylan a bit seemed apropos.  Perry was now surrounded by teen heart throb characters himself - that bygone era of his own youthful exploits smartly informed the casting.

2.  All that said - I think what you're really seeing is the younger portion of Generation X, who rolled their eyes at 90210 dolls and Dylan's out-there plotlines and the Tiger Beat magazine-infused "bad boy" persona...  the generation that watched all that has now aged into minivan driving parents wrangling high schoolers of their own in many cases.  In Perry's death, we're seeing one of our own die, and not from drug overdose or an accident or a medical malady that's just one of those surprise, unfortunate things that hit young stars.  Luke Perry passed suddenly, from a stroke, something common, but one of those things that take parents and grandparents.

Gen-X, the generation that laughs about how it's forgotten between the Boomers and Millennials, who can't even get a line on a bar graph on CNN, just saw a teen-heart-throb - one of those signs of our youth and youth culture - die of natural causes.

A friend who doesn't follow the blog posted to her facebook how odd it is whenever someone from high school passes, lumping Dylan McKay - if not Perry - in with Class of '93.  And, yeah, it's a bit like that.  After all, Dylan McKay graduated with me in Spring of 1993.  He started college with me in Fall of 1993 (it didn't take - Dylan was too free a spirit for the classroom) and the gang from the show entered the workforce at the same time.  Hell, last week the rest of the cast had literally just announced a multi-episode show about the actors playing themselves trying to get a new 90210 show picked up, which, it was assumed, Perry couldn't be on because he's working more steadily than most of the rest.  We're worried about where our careers are, and what we're going to do next and there's Brandon and Steve right there with us.

Sure, Luke Perry isn't the usual sort of person I cover when they pass, but when I came off hiatus a while back, part of what I wanted to reflect on was what it was like to be the age I am at the time - nearly 44 today, not what a 20-something intern is told to write up.  And I'm not going to pretend this is a Luke Perry fansite, or I've kept up with his career.

But, as many said today... holy @#$%, Luke Perry died.  Not like James Dean in a mad dash around the wrong curve, or like Jimmy Hendrix partying too hard.  No fodder for tabloid tell-alls.  And somehow, it feels like a line was crossed.