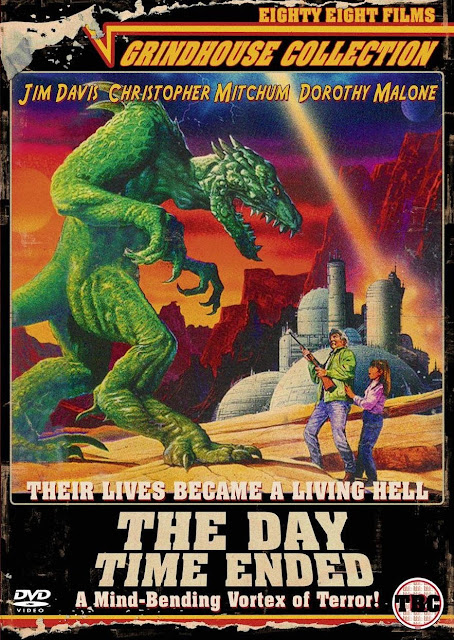 
The Grandpa in the movie is played by a pre-being-dead Jim Davis, who us 70's/ 80's kids will remember as Jock Ewing from Dallas.  And let me tell you how weird that was to see that dude again and actually kind of recognize him (he died in 1981).

The Grandma also looked familiar, but in a "but when she was younger and less Grandma-y" way, and it was none other than Dorothy Malone, who plays the sexy book store clerk in The Big Sleep.

And, as a special treat, the cast also included Christopher Mitchum, who you will remember as both son of Robert Mitchum and Santa from Santa's Summer House.

The Producer/ Director of the movie - Charles Band - has gone on to be a hugely prolific B-movie schlockmeister, and it looks like this was just him getting his feet wet creating cheap and cheesey sci-fi films.  If he intended to be heady in any way, it more or less just feels instead like listening to stoned college freshmen talk about "time is a concept, man".

What is kind of odd is that the FX are about par for the course for the era, so it feels like Band is working things out with people he wants to work with and story is going to come later in other movies.  Here, we're just making an FX reel as a movie.  But don't expect any story, motivation, nothing.

I agree that by the Gauntlet the crew hit their stride. It seems like they're more comfortable to let there be some quiet time in the film - the early episodes seem like they struggled to cram every non-dialog moment with comments. This might have been more of an issue with the Kickstarter level to add funder-provided riffs, but that's just a guess.

This film, though, was a gem. Some really bad sci-fi and story telling here, with a cast that seemed to try to make something of it.