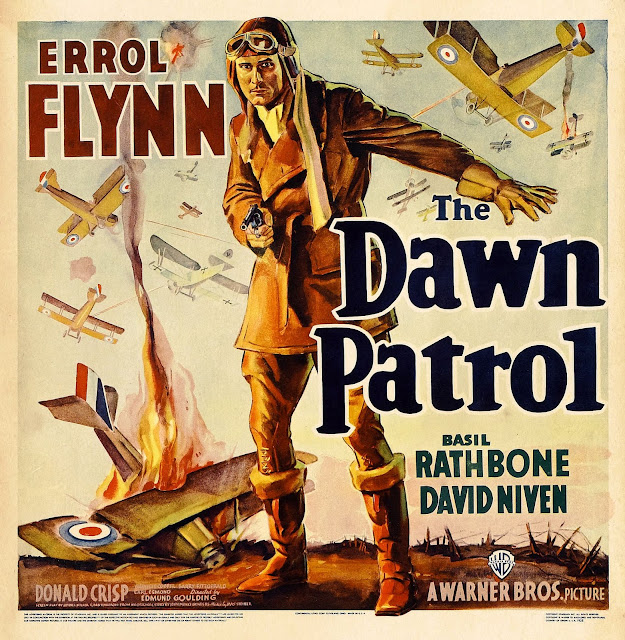 
Look.  You're going to find varying numbers, but about 1 in 5 British pilots died in action and more in training.  I've also read the average life expectancy for a pilot was 69 flying hours.   Maybe better than what's shown in this film, but that's an average.  YMMV depending upon where you're placed.  And, look up the sobering stats for down allied aircraft in WWII some time.  My point being: look, you don't get to write off people getting fatalistic in airplane movies when getting killed is kind of what happened, and these movies are sometimes about not being in a great headspace when everyone around you is dying.

Likewise here in this film - Basil Rathbone plays the officer in command of an aerodrome near the front, given some of the toughest missions.  Over time, he's seen his men taken out by the increasingly suicidal missions directed to him by officers calling him on the phone who, themselves, are safely tucked away from from any actual combat.  As fresh pilots arrive in wave after wave, the cost the war means the new pilots have less and less in the way of training, and are, therefore, more likely to die with each new set of fresh young faces.

But he does have his two veterans, played by David Niven and Errol Flynn - two flyers who can't seem to get shot down in mission after mission.  They don't laugh at death, but maybe with it as they drink hard and go up again each morning.  Like any novel or film that racks the grind of war, from All Quiet on the Western Front to Catch-22, the absurdity of their situation is mixed with nerves that frayed long ago, and you can either laugh or cry or fall into existential despair.  Or all of the above.  Even the capture of a German flyer who shot down several among them is no reason to get angry - he's in the same boat at they, and everyone might as well get along.

Most of the action takes place on the ground - enough so that a stage play of the movie would be entirely possible in the common room of the squadron as they wait for planes to return. But there is a sequence that occurs with a gutsy, near-suicidal bombing run at the mid-point of the film in retaliation for a slight, and that and a few other sequences show some dazzling aerial photography for the era.  The bombing run leads to a shift, and Flynn is placed in command, taking orders from far away, a position he learns is the hardest one of all.

Flynn and Niven were, apparently, great friends and it shows on the screen, and their scenes together are much better than I've seen mention of in a few places I looked for reviews.  It looks and behaves like genuine male friendship in terribly bleak circumstances and facing tests left and right.  Rathbone is excellent as the lonely commander, experiencing his solitary arc through the film.

Really, the movie has a lot to recommend it.  I'm curious to hear from someone who didn't like it very much as to the why's and wherefore's, and I'm not sure I enjoyed it, exactly - but it's a reminder of the mistaken notions of glory and what we ask of people as we send them into battle, and that's a message worth re-examining as many times as it takes.