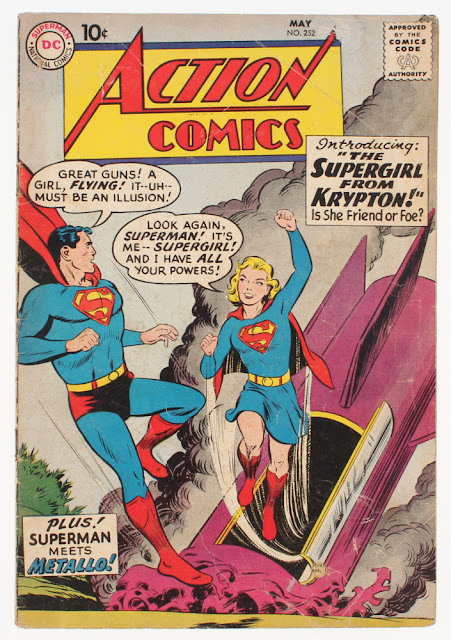 Action 252 is the first appearance of the second time DC floated a super girl,* but it brought Kara Zor-El to Earth, not from a dimensional wormhole or anything like we get in fancy, modern stories, but from a loose chunk of Krypton that was just hurling through space with a city and an atmosphere.


The explanation above is maybe the least crazy thing to happen in  a Superman comic in 1959, if you know your Superman.  She's immediately given a great place in the Superman Family of the day, alongside Jimmy, Lois, et al.  And then given her own adventures more or less immediately.

Since then Supergirl has appeared in numerous comic series, her own title, lived in the future, had a feature film starring Helen Slater, and now been a TV show for something like five seasons.  There's a rumor there's a Supergirl movie in the works, but..  I mean.  We'll see.

Sadly, Issue 42 of Supergirl - originally slated for May - will be the last of the current series whenever DC fires up the printers again.  But that won't be the last shot at the character, and it's my sincere hope that any new Publishers at DC will work to rehab the character and remember what makes her work (making her angry and goth for short bursts is not it).

Happy Birthday, Supergirl!  You look great for a someone who is 17 or so for the 61st time.

If you want to read some fun Supergirl, I highly recommend Silver Age work, of course, but there's a 1980's run recently collected by DC.  It has both a volume one and volume two.  And, there's a good run written mostly by Sterling Gates from a few years back.