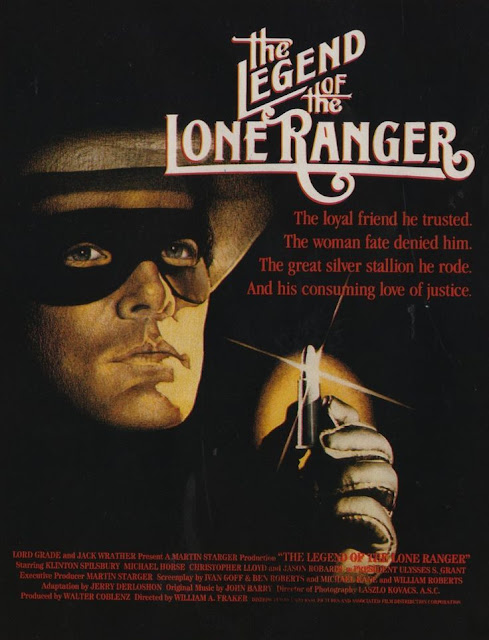 I remember being confused that, in 1981, I was not allowed to see either Legend of the Lone Ranger or Zorro the Gay Blade.   I'd catch Zorro in the summer of 1993 on TV  - summer I graduated high school, and it confirmed what I'd heard from friends at the elementary school lunch table about why I'd not been taken to see a movie about the original superhero.  Legend of the Lone Ranger held a lot more mystery - partially because it was just harder to find and partially because of what little I'd heard.  "It's really violent" I was told.


Every few years I'd look for the movie to no avail, and eventually I kind of forgot about it.  But as a kid I'd been a fan of a short-lived Lone Ranger cartoon,* and I would watch episodes of the Clayton Moore/ Jay Silverheels show when they'd be on here and there in syndication.  So I knew the basic mythology of The Lone Ranger, even if I didn't know the *origin* of the Lone Ranger til at least college.  But even in middle school I knew The Lone Ranger was the uncle of The Green Hornet, as every school child must.

Weirdly, I did have the action figures from the movie - so they knew this *should* be for kids.  And I loved those toys.  I had Silver, The Lone Ranger and Tonto, but could never get my hands on the rest of the figures at the time.  Anyway, when I wasn't playing with other kids, Han Solo and the Lone Ranger would sometimes team up at my house.

So, yeah, Legend of the Lone Ranger (1981) is a strange movie and sits somewhere pretty far toward modern thought in the continuum of camp to non-camp presentation of superheroes on screen.  I may love Superman: The Movie, but once you hit Metropolis, the movie indulges in plenty of wackiness.  You're really at Batman (1989) before you get a consistently straight take on the goings-on.  And that looks like a summer comedy compared to The Dark Knight.

But it's also indicative of what happened with "superhero" movies after the success of Batman.  The Marvel and DC heroes were hard to adapt to the big screen in a pre-CGI world, and - kids today would never believe it - but Iron Man, Thor, Captain America, et al... had very little name recognition.  Especially with people old enough to cut checks for a movie to get made.  But they *did* remember The Shadow - an early multimedia superstar, and The Phantom - who had been an action serial in the newspapers every day for decades.  So, yeah, it totally makes sense that in an era before we'd coined the term "pre-awareness", that counted for something and everything old became new again.  Just as my generation made our childhood heroes matinee idols.

The Legend of the Lone Ranger serves as an origin story for the masked lawman - a sort of "who he is and how he came to be" that takes literally an hour to get him into the outfit.  Which, between you and me, is way, way too long.  There's a lot of set-up of a Texas town (the Ranger of the Lone Ranger is a Texas Ranger, if you never quite thought about the name).  And I think we're around the second act turn when John Reid and his brother's Rangers unit gets ambushed by Butch Cavendish and Co.  Which makes sense on paper, but, again... people came to see a guy in a mask for 90 minutes and really only get him for 30.  Which is also a reminder:  with that much set-up, *everyone* would have recognized our mysterious hero.

There's a fairly serious tone to the movie - they aren't going for camp.  This is a genuine attempt to update The Lone Ranger for an audience that grew up on Moore and Silverheels and make a mythical western for an audience that both wants a Lone Ranger in his familiar outfit, but also wants to see him actually use his pistols for something other than fancy tricks.  And, they want to really get that set-up in to humanize the character.  Maybe far, far less so for Tonto, who receives a bare minimum of screentime and dialog.

I'm just not sure the effort works.  The pacing is grindingly slow until it isn't,  The movie has unnecessary narration provided by Merle Haggard, just about the same time Waylon Jennigs was providing incredibly similar VO on Dukes of Hazzard, and both are listed as "The Balladeer" on their respective IMDB pages.  And, man, a full hour til we get to the masked man is way, way too long for what could have been summed up in a flashback or three lines of exposition.

The aforementioned violence isn't really that bad, but it's bloodier than TV violence.  They aren't shying away from the end result of someone getting shot.  And, honestly, the last 30 minutes of the movie where The Lone Ranger and Tonto do their thing is pretty okay as far as 1981 PG action stuff goes.

Anyhoo... the thing that will melt brains when watching the film is the all-star nature of the movie.  The Lone Ranger is played by a gentleman who only did two TV episodes and then this movie before hanging it up.  There are literally only 3 credits on his IMDB page.  Tonto is played by Michael Horse - who you know from Twin Peaks.    Christopher Lloyd plays Butch Cavendish.  Jason Robards plays Ulysses S. Grant (who is kidnapped from a train, all of which felt very Wild Wild West).  But characters include Wild Bill Hickock, Buffalo Bill Cody and General Custer, just for good measure.

And, yeah, like I said, they just kind of sideline Tonto, which...  My memory is that Jay Silverheels' Tonto was not shoved to the background.  He was right there with The Lone Ranger, even if he did let him take lead (it was TV in the 50's, and, anyway.  Welcome to actual history, kids).  But the 1950's TV show didn't basically just wave at Native Americans and suggest they were magical in quite the same way as the movie.

In short: Tonto gets the short-shrift in this movie, only really plays nursemaid to our hero, and then stands around.  Which is dumb.  Michael Horse is terrific.

Anyway - it's interesting to see this attempt to do something that Marvel finally solved years later.  It's not exactly successful, and they struggle like hell with the William Tell Overture, but it's got it's moments. Disney's attempt at a reboot a few years back has some solid fans, but did a John Carter at the box office, so...  It's coming to Disney+ soon, so I'll give it a shot then, Johnny Depp and all.

I saw this as a kid, thought yeah that's too dark for me, then pretty much forgot about it. Always loved the old TV show when it came on Sunday afternoons.

Yeah, the old TV is kind of great. Holds up in much the same way as Adventures of Superman. Good casting, tight stories. Knows what it is.

I will, as I said, finally watch Lone Ranger from a few years ago when it comes on Disney+. Just kind of have to give Zorro and The Lone Ranger a shot whenever you get the chance.

I vaguely remember going to the theater with my dad to watch this. My dad was/is a huge cowboy narrative fan, and he was really excited to watch this and bring his boys to share it with him. We had watched much of the old b&w show, so we knew the charactera.

I don't remember much of the film other than Tonto giving our titular hero the silver bullets. Probably because it bored me at the time. Now I need to watch it again.

If you've got Amazon Prime, it's streaming for free! So, now is your time!