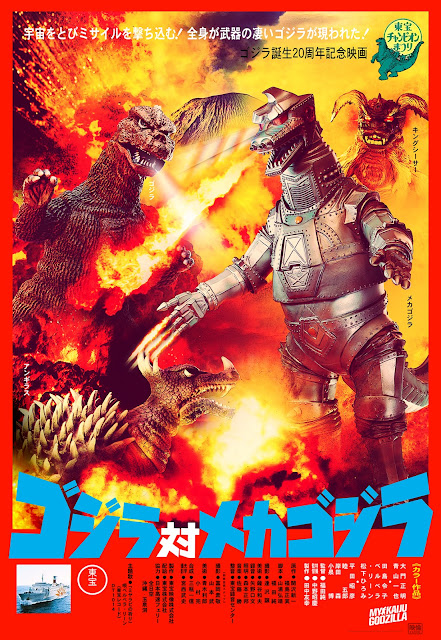 
As a kid I had seen Godzilla vs Mechagodzilla (1974) but I really didn't remember much, which makes sense.  It's a film that feels like either the script was dictated by an 8 year old while eating too many bowls of Cap'n Crunch, or it was made entirely by Script Mad Libs.

You see, Godzilla is evil again, and goes on a rampage, which seems unlike him.  He even gets into a fight with his pal, Anguirus.  Meanwhile, a pair of brothers are visiting a former castle in Okinawa when they hear a prophecy from a young woman having a seizure.  Monsters are going to fight (frankly, *I* could have delivered this prophecy in the context of Gozilla-Japan and been 100% right.  But.).

It's a whole scene.

The thing is, the statue unleashes a monster named King Caesar who is supposed to protect Okinawa, and he is the dumbest looking of all Kaiju.

Which is crazy, because Mechagodzilla looks boss as hell.

Anyway, King Caesar mostly just hides (I am not kidding) until Godzilla has taken all the hits and then he jumps in for the final blow.  It's a lot of bullshit, but - in fairness, he's just large.  He has no radioactive bolts or breath or nothin'.

My favorite part of the movie was the head bad alien who walked around smoking cigars and drinking booze and telling people off while wearing a shiny jumpsuit.  #lifegoals

The sequel, The Terror of Mechagodzilla (1975) has a coherent, very sci-fi-ish plot about the aliens coming back, rebuilding Mechagodzilla and enlisting the aid of a mad scientist and his (shocker) attractive daughter who... IS A CYBORG.

The aliens want the mad scientist to unleash Titanosaurus on Tokyo so they can engage in urban redevelopment.  And I am not even kidding.


Interpol gets involved, shit gets out of hand and we get the tragedy of Cyborg Girl dying.  Which is double-tragic because she'd just found love with a marine scientist while listening to this boss-ass version of Clair de Lune.

I mean, Cyborg Love is HARD, y'all.


What's weird is that Ishiro Honda who directed the first Godzilla returned for this installment and it is... weirdly less clunky than prior installments.  Like, clearly the Toho people were still doing their thing with the script and he stayed inside a certain box making the movie, but it just feels like more of a real movie.

Anyway, these are the best movies I have ever seen.

The aliens want the mad scientist to unleash Titanosaurus on Tokyo so they can engage in urban redevelopment.

This sounds like something the Trump administration would do.

I would literally vote for the aliens in this movie before I'd vote for Trump. At least they have a plan.