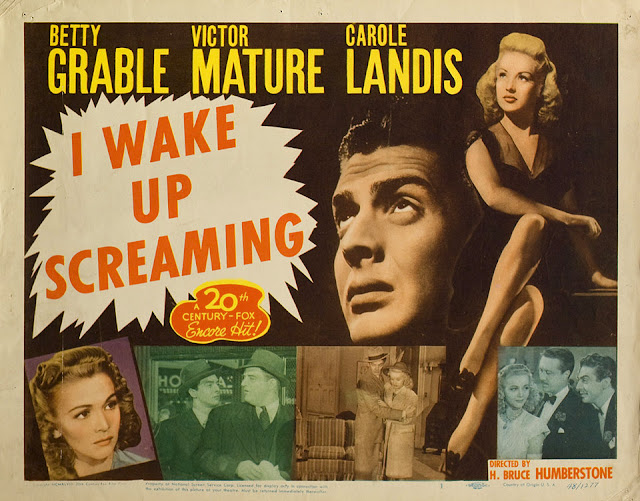 Of course it's also so early it does some things later noir never would try.  It stars Betty Grable.  The score is 40% the first few bars of "Somewhere Over the Rainbow" over and over - which is a mystery even czar of noir Eddie Muller wasn't able to crack.  How did this famous WB-owned song wind up in a Fox movie about a dead starlet?

This time I also particularly paid attention to that dead would-be-starlet, played by Carole Landis.  She has the edge that could spin her any of several directions in Hollywood, including potentially as a noir dame, but she went the musical-comedy route (sadly, Landis diedshortly after the war).  I won't lie - I like her more that Grable, but that isn't a massively tall order

If the title seems a bit much, it might be.  But if you're looking for a relatively "fun" noir, this one fits the bill while also having some pretty dark stuff tucked in there (Cregar's final scenes are something else, as is everything he does).  But it also has some lighter touches and winky moments for good measure that noir would far less likely contain by '48.

But if you doubt the films bona fides, it DOES star a young Elisha Cook Jr.  So.  There you go.