Part of the overall feeling is that work has been crazy.  I work in admissions and financial aid for a large university, and they operate on a yearly calendar with clearly set expectations of events like "high schoolers will finish school in the early summer, and in late summer, our Freshman incoming class will arrive."  Right now, high school is happening, sort of, but those kids aren't getting a commencement (although one can imagine suffering through the thousands of online commencements which will still occur).  It's not clear if we'll have summer school or how on The Forty Acres.  And, depending on how this plays out over summer, it's not clear if we'll have a Freshman class arriving in August.

So.  Anyway, work is weird.  We're getting lots of "creative" ideas coming down the pike that solve an immediate problem but don't necessarily see the big picture.  You don't want to start with "no", but you do want to ask if we know what this means in 18 months. Meanwhile, we're still operating as if everything is normal in other ways, and so I'm working a lot from my home office.  There's an endless batch of stuff to do.

We haven't seen anyone, really, since about March 11th when we had dinner with Jamie's dad.  The Zoom Happy Hours have commenced.  I've had a few Zoom meet-ups with various pals.  Facebook and twitter have been good for keeping up with folks and keeping spirits up.  Meanwhile, everyone who is a parent is a having a hell of a time as those fulltime jobs seem to keep happening while the kids are still around with their varying ability to not require attention.  K-12 teachers are being asked to teach, but many of them have kids at home, too.  I've only got one person on my staff with school-aged kids and she's... hanging in there.  I am not pushing her.  It looks exceedingly hard.

I only know two people who I am aware have had COVID-19, and they're out of town.  It's medical, and they can speak up, but I'll stick with HIPAA privacy and not mention them by name.  What little I picked up about their situation was absolutely miserable (they were early on this), and genuinely scary to watch unfold over social media.  I believe they're out of the woods, but now they're quarantined like everyone else.  Austin is still waiting for the wave, which I'm told we still can't anticipate for a full month yet.

My capacity for hope waxes and wanes.  My city is largely doing a good job of social distancing, but then I went to a grocery in a more working class part of town for curbside pick-up (I haven't been in a store in a while), and - despite media blitzes and endless informational and feel-good commercials using COVID-19 to sell trucks or life insurance - but mostly to tell people "cover your mouth, wear gloves, stay away from people" - while I sat in my spot waiting for an HEB employee to fill my trunk with canned goods, a stream of people headed into the grocery.  No mask.  No gloves.

That same day (Sunday April 5) I went into my work office building to collect some items.  It was Omega Man in there, and I still wore a mask and gloves.  I would love to see the security footage of this chubby masked man wandering the halls, looking to see if he could find anybody.

The young people whose brains haven't formed enough to grasp the full picture of COVID-19 is going to perpetuate the problem.  From people who generally can't be told to stay home in their parent's houses to people who keep not caring about the memos telling them not to congregate - they seem to struggle the most and have no one around to lay the hammer down, it seems.

Also, Austin has it's fair share of issues with the kids heading out on sunny days to chill at their favorite sunny spots, but we're also hearing about those kids who flew off to Cabo for a week and who came home with the virus.  There was a reason universities did not want students returning after Spring Break.  There was a not disimilar reason the city canceled SX.  And then had to shut down everything when the response by bars and local entertainment enthusiasts - as well as those who already had hotels booked - was to try to improvise a massive music festival.  I mean - the ability to miss the point here was breath-taking.

The hardest part is, of course, that the President is a malignant narcissist.

This is not something I believe because I didn't vote for the man and my party affiliation wants to cheer against the president.  I've thought of DJT as a loser since figuring out in high school or college that he inherited his wealth and was a multi-time bankruptcy filer who mostly played a rich person in the media more than he actually *is* a genuinely successful person.  From his penchant for horrible movie cameos to his eventual landing of a spot as the focal point of TV game show The Apprentice, until America lost it's mind and voted him to our highest office, I assumed we were all having a quiet laugh at his expense.

Well, a bunch of people who listen to too much talk radio found their guy in Trump, and here we sit.

The first deaths in the US from COVID-19 occurred just over a month ago, reported on February 29th.  The first deaths in Italy had occurred about a week before.  Around March 9th, Trump was taking to the podium to declare coronavirus a hoax by the lefty lamestream media.  About a week later he was being marched out to make announcements and hand-editing his typed remarks to scratch out "Corona Virus" and replace it with pointy-white-hood favorite "Chinese Virus".  Also, how this guy didn't get the thing himself when he was forcing handshakes on everyone around him, even after Ted Cruz and others quarantined themselves after meeting exactly the same people, I do not know.

Mostly, he was trying to stop the Stock Market from plunging.  No matter what else happened, the economy of the US has been gangbusters since the end of the first term of the Obama presidency.  It's unclear if Trump's policies had done much that was new to stimulate anything, but he certainly hadn't done anything negative for those who own shares of stock.  And he'd been counting on that as he rolled toward November.

The markets are as emotional as a 16 year old with no sleep, and they don't really look to the President as their only source of news.  Things didn't go great. 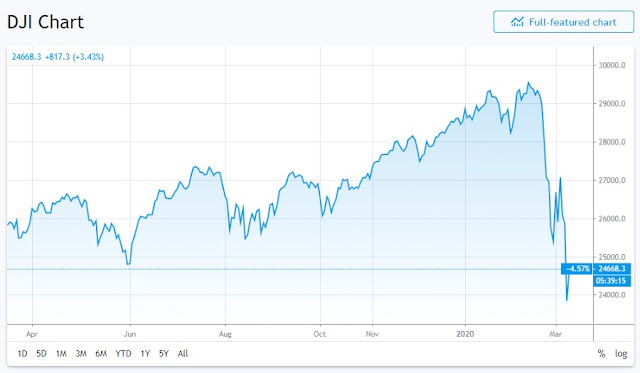 Anyway, I am sure people are still talking about the stock market, but after the US saw more layoffs in a single week than any time in MY lifetime and probably since Black Friday, now the questions about the economy are much more about "oh, shit... is this a Depression?"  The entire "let's base the everyday person's salary on the service industry" pretty much fell apart immediately around March 16th, and there's no plan how toward recovery (though we'll find one).

Meanwhile, every day, the President of the United States, who is not currently allowed to fly to his favorite haunts and have rallies (Jesus Christ, how do we explain to young people this is *not* part of the job of the president?) has taken over the daily news briefings where he freestyles, makes up information, argues with reporters who ask him about what he said the day before, and is generally the kind of nuisance that would get you banned from any self respecting Arby's. Fortunately the live coverage of said reports has mostly lost the public's attention and we're instead getting recaps about what literally insane and/ or fictitious stuff the guy is saying.

Literally any five minutes in this guy's presidency would have doomed anyone else.  One day a lot of books are going to be written about what a bunch of shitheels this Senate turned out to be, especially Mitch McConnell, who is going to spend the next century as a cautionary tale.

The failures of leadership are going to kill a lot of people.  You kind of hope, specifically, the virus would just kill the kind of people who think having shirtless hug parties right now to stick it to the libtards and their cowardly, economy-destroying ways is a good laugh.  But the problem is that viruses have a tendency to not just target select people who buy their red caps through the DJT online store.

He's spent the weeks we've been in isolation continuing to gut agencies while everyone's attention is diverted, making horrible clearly-the-villain-in-the-movie choices about firing ship captains begging for help, and he's let states and local municipalities decide how to handle the situation on their own.  Which... isn't a great idea and will surely extend the length of the situation (while strangling the economy all the more - plus, all the unnecessary deaths likely to occur).  Local politicians in far too many areas have run on the "I hate the gubmint tellin' me what toodooo" platform, so they sure as hell can't start doing that NOW.

A disease shouldn't be politicized, but this one has been since the outset.  How to deal with it has also continued to be politicized in the face of all facts and pointed evidence.  Shockingly, spending the last twenty years electing the person to be the bigger ass-hat with more extreme ideologies has somehow meant: maybe we aren't electing the best people to handle actual problems we should know how to handle.

Heck, last week (LAST WEEK) the Governor or Georgia, no back water state here, stood in front of cameras and announced he just learned the basics of how the disease spreads and the long incubation period.  The same stuff mainstream news was saying when this thing was a regional problem in China right after the new year.

As there's no coordinated federal response, states are now in competition buying needed emergency gear for hospitals and medical personnel.  The shortages of the most important things in this crisis - maybe as much as food and water, in order to keep our healthcare workers going - is astounding.  And the President literally said he wouldn't take responsibility for any of it.  Madness.