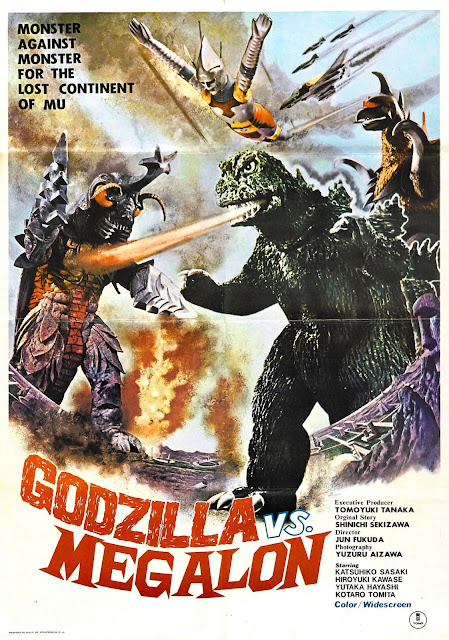 
This movie - I checked to make sure and I was right after formulating an hypothesis - started off as a movie just about Jet Jaguar, a new character cooked up by Toho*, until someone at Toho noticed they made a lot of money off of Godzilla and people might show up for Godzilla who did not show up for "here's a guy you never heard of".  So, yeah, it was intended to launch a series of Jet Jaguar movies, but as far as I know, this didn't happen.  Nevertheless, the focal characters are two young, hip dudes - a race car driver and his pal, the electrical engineer - and said engineer's little brother.  Who wears shorts and long sleeves.  I'm guessing these were the main character of whatever they wanted to do later.

Anyhooo... An underground nuclear test in the Aleutians sets off a seismic reaction no one on the surface likes, but it also turns out there's an underground kingdom called "Seatopia" for absolutely no reason, as they live in a cave, which features scantily clad women in gossamer and your high school principal somehow coerced into playing their leader.  Apparently the only remnant of their former life on the surface is Easter Island, where they did their thing before taking their show underground.  Now, the Seatopians are mad at the surface world, so they have an unduly complicated plan that includes launching a giant beetle named Megalon at the surface world, and, in particular, at Tokyo (for some reason, even though Japan didn't test the bomb).  They also kidnap Jet Jaguar - who is a recently finished robot no one, especially people who live in a cave underground - really had any reason to know about.  There is also little brother kidnapping.

Jet Jaguar is a noble robot who seems to gain some sort of sentience and also the ability to grow to giant size - not through a feature designed into the robot, but because he* really wants to*.  Which, in its own way, is pretty great.  I sometimes really appreciate the power of positive thinking manifested in some Japanese media (they also go super dark, so, you know... maybe we aren't so different after all).

At some point Gigan, who is an asshole, just shows and joins in the rampage of jerkery Megalon is already enjoying.  And Godzilla shows up, picks a side (and despite his bad luck with shiny giants, picks Jet Jaguar) and there's a wildly entertaining tag-team fight.

The movie is so kooky I actually had a bit of a time following what was going on from time to time (like: wait - why did Jet Jaguar just grow to 50meters tall?), but it's all good.  Maybe not my favorite Godzilla film, but certainly a fun one.

Even if I don't get why Godzilla is supposedly afraid of fire for a minute there.

*JJ started off as the product of a fan contest to create a new character for Toho, which they changed significantly in design and name by the time they rolled film, so they basically trashed the finalist's idea
Posted by The League at 5/12/2020 10:03:00 PM