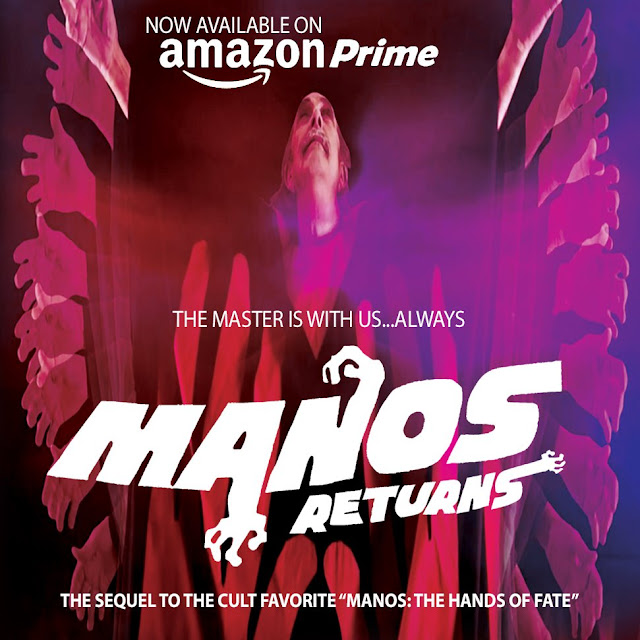 Somehow a return to "Manos"- The Hands of Fate, the 1966 zero-budget horror indie out of El Paso, TX, which had neither synced sound nor coherent narrative, and arrived in 2018'ish as a shot-on-video-but-not-great-video and featured simply too much dialog - was kinda just right.

Manos Returns (2018) features - and I want to get this out there, because I missed this prior to watching - the original actor who played The Master and the former little girl who played Debbie, now a grown lady-person still playing Debbie!  Take that, David Lynch and your 25 years later!

Much like the original, I don't understand the movie or what it is trying to do.  At times it seems like it wants to be a parody, and at other times, a straight sequel with some enhancements thanks to the power of video editing. There's genuinely more story to this movie, but with similar outcomes.  And more red bras.  Lots of red bras.

I dunno.  I didn't *not* enjoy seeing the movie, and it is definitely a worthy successor to Manos, whatever that means.  But, you know, beware something striving to be a sequel to Manos.

BTW - seeing this also told me there's a mini-market of Manos ancillary media being produced.  Debbie is going on to make a TV series, there's a Rise of Torgo movie out there, too.  And seemingly other things.  Anyway, proceed with due caution.
Posted by The League at 5/11/2020 09:29:00 AM