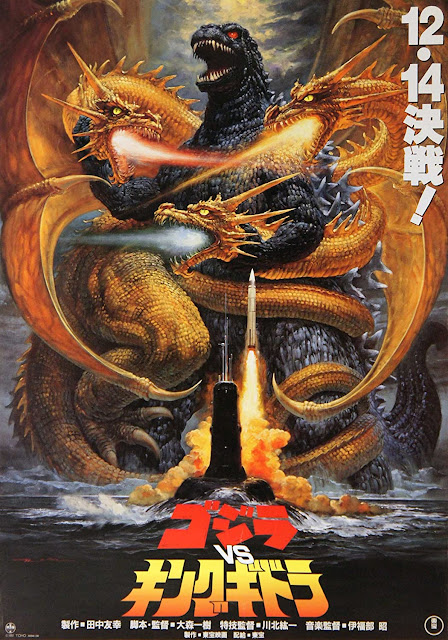 
Because we're just skipping around and I wanted to watch a King Ghidorah flick, we jumped into this one, I had to look up when it took place in the Heisei Era film order, and it's third.  I can't track down it's predecessor, Biolante, so I don't know what we're coming off of, but it does seem to be the movie that pivots Godzilla to an aggressor in the films again, as it seems he was a protector in the prior film and Toho must have decided this was a bad idea.

Their method of "fixing" the problem is whack-a-doodle as hell - and involves what must be a dystopian future of mediocre white guys in bad suits showing up in a time machine, speaking fluent Japanese but otherwise generally sucking.

The movie states that the Godzilla from the 1954 and 1984 Godzillas was a dinosaur living on an island in WWII who got caught up in the Bikini Atoll tests that turned him into the behemoth we know and love (I think this is a goofy twist, and prefer a giant, ancient beast who is Japan's reckoning, but no one asked me).

Rather than just skipping over 1991 entirely to get to 1944 (and who could blame them?  1991 had super models and a LOT of Phil Collins), the most boring men of the 23rd Century stop off to pick up our POV characters and THEN go to 1994 where our POV characters watch and DO NOT CONTRIBUTE.  Also, the future-folks curiously drop off some tiny cartoon bat things (this will be important).  They arrive in the middle of a firefight on the island, which was entirely avoidable if they just arrived, like, a week later.  They watch as a much smaller and less radioactive Godzilla kills a bunch of American soldiers.  But poor ol' G suffers a lot of fire - before being teleported to Alaska.

It is a wild ride seeing what the Japanese think of Americans in the film - there's kind of a suggestion of American bullying and bravado, which...  Dear Japan.  We were not the ones trying to build an empire via invasion of EVERYWHERE in the mid-20th Century.  And as a protector, Godzilla fought the Americans.  Or not.  It's unknown.  He's a big ol' mystery, that guy.

You know what.  It's a weird movie, and the most important thing you need to know is that time travel doesn't mean everyone forgets Godzilla who no one now knows about, because he never became Godzilla - everyone remembers him.  The world seems completely unchanged except that Godzilla didn't happen, except he must have?  He's just living up north now?  And now King Ghidorah is there (more on that in mo').  Until the dinosaur that's up north gets irradiated and comes back and as bigger/ meaner Godzilla to fight Ghidorah.

This is all part of the mediocre white guy's plot to... something.  I don't know, but they take a heel turn and reveal their plan was always to remove Godzilla and control King Ghidorah, who they made when Emmy, the Japanese girl who is travelling with them, releases into the past via 3 stupid looking puppets.  Like - Emmy - you're clearly part of this.  What did you think was happening?  And why?

Anyhow, there's a return of Ghidorah as a cyborg and I have no idea who I'm fighting for or believe in here.  Maybe the robot?  Who has CD Roms in his head?

All I know is that Miki is in this one, for no real reason.

I feel like something got lost in the translation, but I can't begin to guess what it was.  I've seen this a couple of times before on El Rey and always found it sort of confusing, and now I'm very confused.

OH.  And there's a poetic death of a Japanese amusement park honcho who specializes in dinosaur themed parks.  They really swung for the fences on that one.
Posted by The League at 8/08/2020 10:41:00 PM