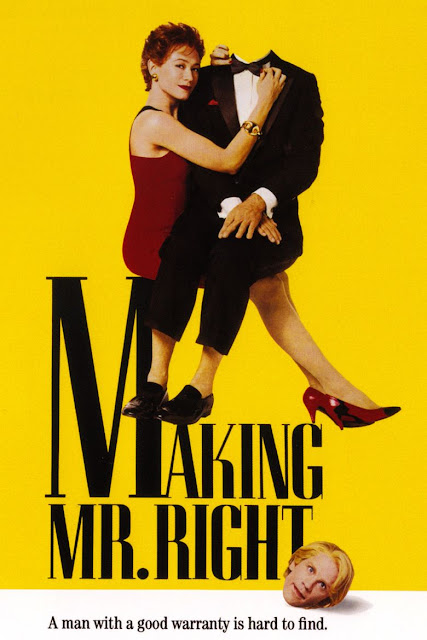 I had only vague memories of Making Mr. Right (1987), a movie I watched on cable as a kid.  And this is the part where I talk about women and their appearance and probably get in trouble.  But I essentially had two memories of Making Mr. Right, aside from very, very broad strokes of the plot of a woman getting mixed up with a scientist and the robot who looks just like him and the robot/doctor is John Malkovich in a role you'll be like "what? why?"

The first memory is the final shot of John Malkovich in space, and I half-watched the movie because I remembered no explanation for how a human was supposed to live in space for 7 years - and, spoilers, none is given.  That dude is dead inside of 2 weeks, in a space coffin filled with his own waste.

Second:  I found out probably a good decade after watching the movie that it starred Ann Magnuson.

What I did remember from seeing the movie around age 13 was that the usual daffy 1980's career girl who is also a mess in her personal life (a la every Cathy comic strip you ever read) never felt like the 1980's daffy career girl.  And, she didn't look like your usual soft-faced actress of the era, from Melanie Griffith to take-your-pick who might have been cast.  I remember thinking, even then, that the lead looked like *a woman*, not a-very-mature-girl.  For me, this was considered a feature, not a bug.

They still dress Magnuson in the required flashy designer 80's outfits, she still has a wacky car.  She has a quirky apartment filled with lots of appropriately 1980's Miami clashing colors.  They even give her a punky, neon colored hair-do.  But Magnuson just never quite feels like a 1980's daffy female comedian.  It's some weird casting, and I give director Susan Siedelman a boat-load of credit for going with it (if, in fact, she was part of that decision-making).  I assume her stance was "but what if we cast an actual woman in the role?"

Magnuson never really has been a huge star - she's kind of a cult figure for her random appearances in decades of stuff now, most recently now as a silver fox popping up in Star Trek: Picard and memorably as Kali in Cabin Boy.  But she was also known for her music career and being roughly arty, New York and part of a certain 1980's-90's sensibility that was not playing at cinemas in malls in the suburbs.

Anyway, it was a trip to figure out years later that the frontman for Bongwater was the lead in Making Mr. Right.

Honestly - this movie only works in the context of movies of the era.  None of it makes any sense except for a certain familiarity with absurd romantic situations cooked up for 80's rom-coms, the jokes are few and far between, and seeing John Malkovich play slapstick is frikkin' weird, man.  And I never thought I'd say this, but Glenne Headley needed to dial it back about three notches in this one.

Something about it just never clicks - like they knew how these movies were supposed to work, and got the basic plot elements together, but there are whole storybeats missing.  You never really find out why the two main characters are interested in each other - and why a grown-assed woman with her own company would fall in love with a robot who acts like an idiot.  It only works if every other man in her movie's universe is a dipshit - and they are.  It occurs to me that because Magnuson never comes off like a dim-bulb herself, it makes the appeal of a himbo-bot as a worthy object of affection seem kind of... like it makes sense even when insist it does.

And, of course, pondering what is going to happen after the credits for all involved is weeeeeeird.  Is Magnuson setting up house with F@#$bot 3000?  Is the scientist Malkovich going to die badly in space, blowing billions of dollars and the prestige of NASA, his own company and his own legacy?  What is even happening?  And how tall is Glenne Headley, anyway?  5'8", says the internet.  RIP, Ms. Headley.

Anyhow - they also try to pass off a wastewater plant as a futuristic robotics laboratory, suggest you'd want to build your multi-million dollar laboratories below ground in Miami, and, in fact, think there's any good reason to have a robot that looks like a human.