Not My Demographic Watch: To All the Boys - Always and Forever (2021) 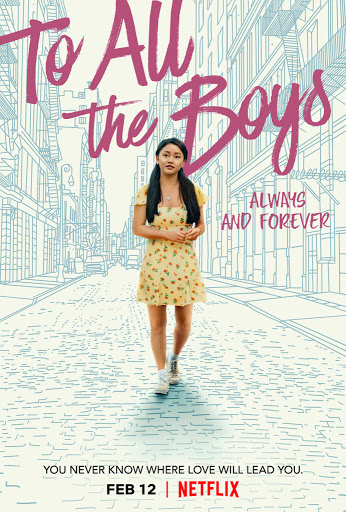 Watched:  02/18/2021
Format:  Netflix?
Viewing:  First
Decade:  2020's
Director:  Michael Fimognari
Look, this movie was never aimed at me, is not now aimed at me, and is not for me.  I have many questions, concerns and complaints, mostly around the fantasy imaginary boyfriend who celebrates every choice the lead character makes. But - also - the movie feels remarkably... lazy and toothless.
Previously, I'd only ever seen the first half of the first of these movies, and the lead's obsession with 80's movies felt kinda goofy and broke the "do not show a better movie inside your movie" rule.  This one decides to reference The Big Lebowski, and I hope the director was just doing this for fun, because a 20-something year-old dope-heavy satire of Chandler mysteries spoofed here is... man, it's kinda wild.
I have to think this movie was originally written to admit what will happen when two high school sweethearts hit different colleges (she will call by late September for the inevitable "I slept with my TA" confession, or he will lie about banging a girl from his Physics class until he finds a way to break up without revealing anything over Christmas, the guilt of the Thanksgiving hook up weighing on him - and suspicions about how her TA keeps texting when they're both off school).  But the movie chickens out completely.  A sweet ending could have been "you know, don't marry the first guy you ever kiss, but have fond memories" as they realize a continent is a real bummer when you're supposed to be experiencing a very privileged, sheltered upper class existence.  But to please the target demo, it promises high school love is forever (spoilers - except it's in the title) (late edit: I looked up the novel upon which this is based, and it's the same ending, so... I mean, I guess at least they stuck with the source material).
Oh, yeah.  So, I now work in IT for college admissions, and I see from the wings the heartbreak and misery of kids trying to apply to and get into college (and failing and succeeding).  It's totally different from the quiet opening of an envelope that we did in my day - now it's a website and reaction videos and is part of the same culture that gave us forest fires from gender reveal parties.  It's AWFUL.  Kids are shattered and can't even grieve quietly, because if you aren't posting your acceptance to Insta... did you even get in?
But I've also noticed that in the past fifteen years, kids in these movies are never generically going to "State" or whatever.  They name drop top tier schools, and sometimes as their back-ups.  Which makes me wonder:  who the fuck is making these movies?
Like, our hero's backup school from Stanford (probably the #2 choice university for smart kids after MIT) is UC Berkeley.  Which...  for @#$%'s sake, guys.  (Harvard and Yale are still there, it's just a different ballgame with those schools).  That's kind of like if your hero was like "I made the Olympic squad, but they didn't immediately make me Captain.  Boo hoo-hoo."  I get that the idea was to get our hero to NYU and that's the calibre of school she's looking at, but...  I honestly don't know if Hollywood is really this filled with upper class rich kids who bumbled through life knowing lots of people who went to Stanford and NYU (I think it is) or if those are just names of schools they figure kids maybe will know?
A huge part of the movie hinges on a "Senior Trip" to NYC that's apparently chaperoned by the world's most negligent adults possible, and who don't miss their charges when they disappear into New York well into the early hours.  Like... in 2021?  That girl is getting sent home in handcuffs.  And her boyfriend is just kinda like "hey, you disappeared in NYC and didn't think to text, but it's just another wonderful thing that makes you YOU."  I also thought the shot of her hearing the song on the rooftop was, for a full 45 seconds or so, her realzing "oh, I'm into GIRLS".  But, no.  As a tourist who parties (sober?), and who saw many touristy sites, she now realizes she LOVES New York.  After all - she ate a cupcake there!  And by the extension of this logic, may also LOVE Six Flags.  Or The Grand Canyon.  Or Cancun.
But, look, this isn't for me - as I said.  It's for giving younger people a peak at the possibilities of the post-high school chapter in their life and still promising a boyfriend who will agree with everything you think or say, and who will think you're super peachy keen.   And kind of suggests to an impressionable audience that to keep your high school boyfriend forever, you should bang him.
Which, absolutely.  Many dumb-ass 18 year old boys will have this movie to thank.
Posted by The League at 2/18/2021 09:30:00 PM