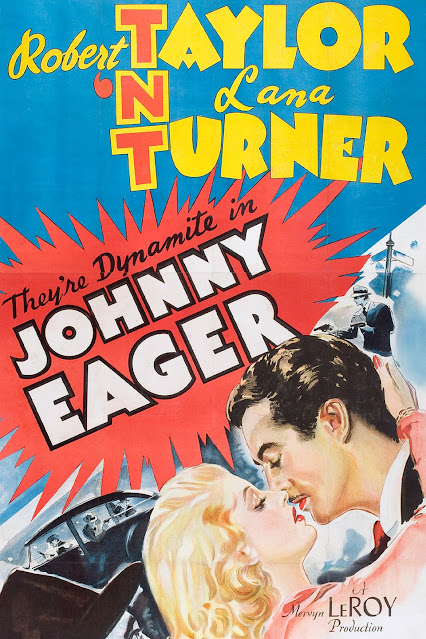 Watched:  02/18/2021
Format:  TCM on DVR
Viewing:  First
Decade:  1940's
Director:  Mervyn LeRoy
Summing up the plot to Johnny Eager (1941) would be extraordinarily difficult - but the short version is: ex-con pretends to go straight, meets Lana Turner, uses her and her step-father to get his new dog track open.  Poetic boozy pal plays Eager's conscience.
Honestly, it's a hell of a movie, and it's likely the goofy title that's kept it from being checked out by enough people.
I'm not a huge fan of star Robert Taylor - who is pretty rock solid here as a handsome, devil-may-care gangster with no refinement.  That's not a dig, but I think I'd only seen two or so Robert Taylor films previously.  But he's totally buyable as Johnny Eager.
The real hook is that Johnny can spot an angle, spot a dope, and has a mind perfectly set for operating in the criminal world - but he can't understand the straight world.  People with pure motivations are a mystery that gnaws at him.  More than that, his understanding of women is only as pliable tools, either as sexual playthings or as employees.
What makes the movie curious - and maybe different from other gangster films with bent leads - is the presence of Van Heflin as Jeff Jartnett, a drunk and seemingly a man of education, who hangs around Johnny as pal, enabler, and because he sees the greatness within Johnny and wants to bear witness to either the rise or fall of a great mind.
Out of prison, Johnny has put everything he's got into a dummy organization trying to open a dog track with no permits, but meanwhile it seems his control on the city is slipping.  Others may be moving against him.
Annnnd in the middle of all this, he meets Lan Turner, who more or less throws herself at him.  But winds up in way deeper than she barganined for, and it takes a toll on her psyche.
This is very early to be considered true noir, but not so as a gangster picture, which this most certainly is.  And Turner is a femme fatale only in that she leads Johnny toward his downfall because he actually does come close to understanding sacrifice via whatever passes for love in his heart.  It absolutely is a man making bad decisions (that, I mean, get him dead) over a woman, but they also redeem him, which isn't very noirish.  But that he goes down throwing a hail of bullets and popped off by the cop who married his first girl?  That's some symmetry there.
And that's the interesting thing about the movie, really.  It's a down-in-the-streets gangster picture about a guy trying to build an empire, and sees the poetry and literary mythology in it all - right down to pointing out "he's just some guy" who dies badly in the middle of the road.
Anyhoo... I enjoyed the heck out of this movie, and not just because Turner had amazing hair through the whole thing, even when we were told she looked "awful".*
*she did not
Posted by The League at 2/19/2021 12:42:00 AM