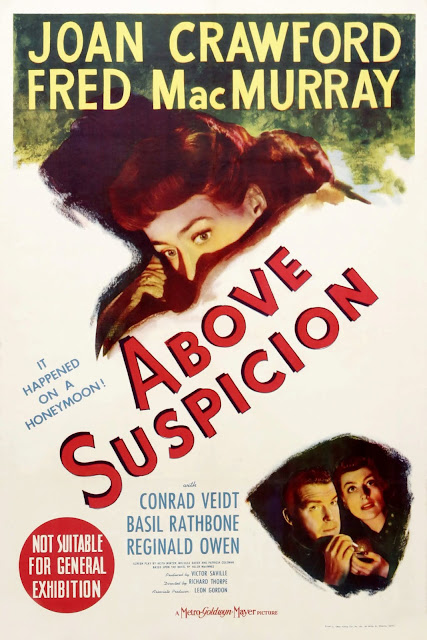 Watched:  06/26/2021
Format:  TCM on DVR
Viewing:  First
Decade:  1940's
Director:  Richard Thorpe
A mid-WWII propaganda picture, Above Suspicion (1943) is also the last film she made with MGM before severing ties with the studio, where she'd starred for 18 years.
I'm honestly not clear on Fred MacMurray's star power in 1943, but Conrad Veidt, Reginald Owen and Basil Rathbone as supporting performers does give a notion of the high-caliber of the film at the time of the release.  And, frankly, the sets, size of the crowds of extras and more suggest MGM planned to make some money while also revving up their audience against Nazis.*
I'm noting the "Not Suitable for General Exhibition" tag on the poster, and I can't figure out what's going on there.  This may be an Australian movie poster - they seem to have had this classification back in the day.  Apparently Joan showing some ankle was a bit much for the censors.
The basic gist of the story is that Crawford and MacMurray are newlyweds who get recruited by the British Foreign Office to use their honeymoon trip to Europe (which seems crazy to have occurred in 1939, when the movie takes place, but there you go) to go get some info from a German scientist about magnetic landmines.  They have to dodge Nazis, wear disguises and become involved in a resistance movement.  Arguably, the plot was lifted for the Zucker Bros. comedy Top Secret.
Crawford is *good* in this movie, and I expect her participation led to some rewrites.  Her character has flaws, but she also is as close to an equal partner to MacMurray as you could hope for in a movie of this vintage - and certainly at least his equal in intelligence and pluck.  She participates fully and is vocal about her desire to participate - I mean, it's wartime America, and this was what people did in the movies and in life.
But Crawford is also somewhat treated like a Robin to MacMurray's Batman, from not being the one who people address to remaining cheerful past the point of common sense (she does drop the cheeriness late in the film).  When you think of how Crawford was able to stand at the center of a movie in the prior decade or how she'd do so again with her Mildred Pierce-sparked resurgence, she just feels underutilized in a strange way.  But with the "Box Office Poison" letter now out there, it's not entirely shocking MGM didn't know if she could carry a picture any more.
Nonetheless, it's an excellent bit of a wartime film and spirited propaganda for the folks at home imagining how to support the war without guns in hand.  How brave could you be if required to go toe-to-toe with the enemy?  Well, pretty sure not as brave as Joan Crawford.  There'd be a lot more "oh.  Okay then."  And I'd not look as good as she does while I'm at it.
*we here at The Signal Watch are always in support of taking down Nazis
Posted by The League at 6/29/2021 01:06:00 AM