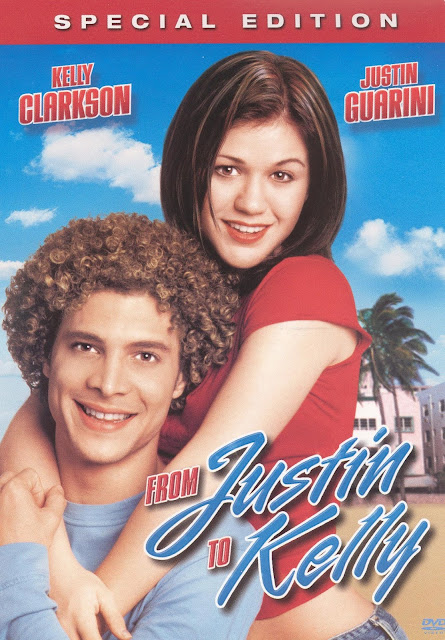 All of this is true.

What really struck me was that the film was more or less made in such a way to try to insulate the film itself from the titular leads.  The script has other characters commenting constantly and giving them more lines about what's happening that the leads themselves get about what they think.  And, they tend to get, cumulatively, more numbers than the leads.
It's in hindsight that I suspect that American Idol, which had this movie lined up as something to do immediately after finishing the show, probably fixed the final tallies in some way to get the two people who would fit into this movie the best to line up in the #1 and #2 slots.  I mean, if Clay Aiken and Reuben Studdard would have been #1 and #2, what was the movie going to be?
So, props where they're due.  I don't actually like Kelly Clarkson's stuff.  It's boring.  But for someone who was pulled out of obscurity and shoved into a movie, she's... more than fine.  She's pretty good.  And Guarini probably should have pivoted to musical theatre after this to see how he'd do on Broadway.  Because he's also fine, and kind of charming.  And, despite everything else, both can carry a note and do some choreography (Guarini more than Clarkson).
The two female non-Clarkson supporting characters are.. right out of musical theatre.  One has gone on to be in Hallmark Christmas movies (her Texas accent was...  not remarkable), and the other is Tiana from all the Princess and the Frog stuff, plus lots of other work (I thought that name looked familiar when it went by).  The two male supporting characters - the douchey guy seems like he's disappeared from acting after repeatedly being cast as a douche.  The nerd guy has been on NCIS, which I've never watched, since 2004.  Which... who are these NCIS fans?
It doesn't mean the movie isn't depressingly plotless and dumb, and intended for an audience that probably doesn't exist - of pre-teen girls who want to watch a movie that's 1/3rd about scheming horny guys trying to get girls into a whipped cream bikini contest.  But it's also written by a middle-aged British person, who is maybe not THE person you want relaying how American Spring Break works (hint: college kids from Pennsylvania do not have long-standing businesses running parties in Miami during spring break).  But, mostly, Kelly and Justin's "relationship" makes no sense in any way, and while they keep showing you the characters feeling like they should connect, they never do - and they're rarely in the same scenes together.  Mostly because they needed to protect their stars with actual actors.
It's also clear no one was going to give the movie their best songs - and so there's literally no memorable tunes in an 85 minute musical.
Anyway, that's enough brain power to put behind this movie for the rest of my life.  Except that Kelly was, at one point, wearing a skirt made from the waist of some jeans and then neck ties, and it was tragic, like someone was doing something mean to her.
Posted by The League at 6/28/2021 12:18:00 AM

Thank you for posting the picture of the necktie skirt. Now I have evidence for those doubters that Kelly wore it, and more so that it even existed.

I figured merely discussing it would raise a lot of confusion, so I went digging. It's not... horrible? But it is wildly goofy and poorly conceived, like most things in the film.