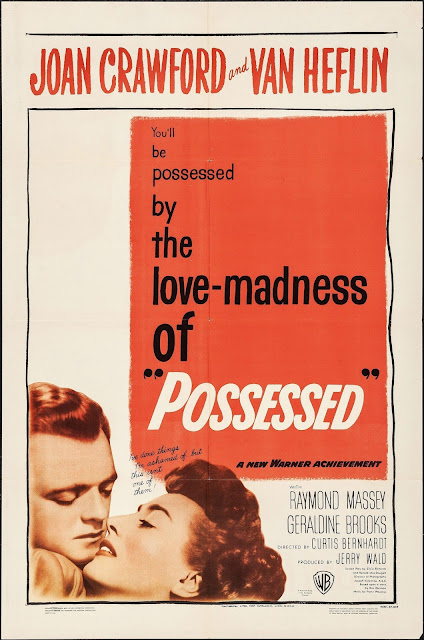 Watched:  06/07/2021
Format:  Noir Alley on TCM on DVR
Viewing:  Second
Decade:  1940's
Director:  Curtis Bernhardt
I'd watched this one a few years back, and - with more Crawford pics, more Van Heflin, and more cinema in general to inform me about the movie - I very much wanted to revisit the film.
Much like High Wall, released around the same time and with a fraction of the budget, the movie is interested in the origins, effects and possible solutions to mental disorders.  Unlike High Wall, Possessed (1947) doesn't all feel like a lot of nonsense to give gravity to a standard pulp-derived pot boiler.
The story revolves around a woman found walking the streets of Los Angeles looking for someone named "David".  She's clearly in distress, and eventually collapses in a diner where she's whisked away to a hospital where she's given endless hours of testimonial to tell her tale to two doctors, one young and handsome and one a veteran of his field.
Our woman is, of course, Crawford, turning in an award-worthy performance as a woman slowly unravelling over the course of a year after two emotional blows hit her.  First, the famous David (Van Heflin) dumps her just as she's discovering her first true love in her 30's (Crawford herself was in her early 40's and looks like a million bucks).  Second, the woman to whom she's a live-in nurse takes advantage of her day off and drowns in the lake outside her home.
According to Eddie Muller, no less than Robert Osbourne had Crawford's performance down as a "shoulda won the Oscar", something he didn't begrudge others often.  But - if you're familiar with 1940's-style acting, jesus - this is an amazing performance and Crawford got screwed.  You really are on a journey with a woman who had issues to begin with and who absolutely comes apart through obsession, guilt and an underlying condition.  But she's smart and pleasant enough to shake off any suspicion, except when confronted with David, who simply just isn't that into her.
It doesn't hurt that the movie is gorgeous, shot on the best of WB sets - including one with a lake front and some water deep enough to putter around on motor boats.  They play a *lot* with elevation, from a lake, up stairs, to the house and then continuing on upstairs (every character in this film was getting their steps in).  And there's some interesting noir lighting during Crawford's episodes.  As much as I like the maybe more intimate feel of the lower budget noir films and what they do with a pair of miniblinds and a kleig light, I also very much appreciate the spectacle of a studio-era film with full backing and what they could accomplish.
The story does ape not one but two other films, including one in which Crawford herself returned to stardom.  The "nurse marries the husband of the patient" bit occurs before the action of Double Indemnity, and it's hard not to see the parallels of a mother figure and a daughter both with designs on the same guy as Crawford had done just before in Mildred Pierce.  Also - weirdly, Crawford herself starred in a 1931 film with Clark Gable, also called Possessed, but with a totally different plot.  And, I think, meaning "she's a possession" rather than "demons have possessed her".  But I'm gonna look it up and see if I can watch it.
Posted by The League at 6/08/2021 12:41:00 AM