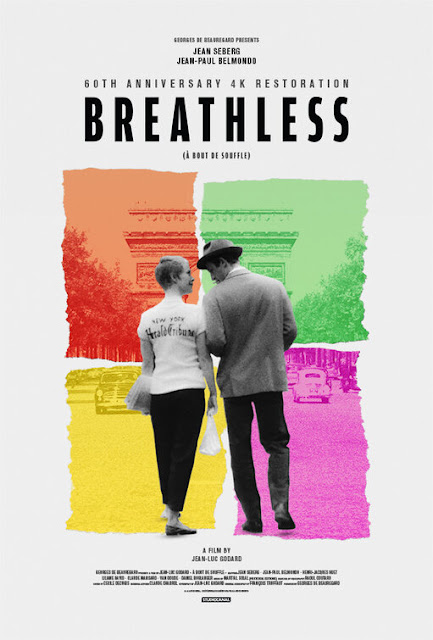 Watched:  06/08/2021
Format:  TCM on DVR
Viewing:  First
Decade:  1960's
Director:  Godard
Sigh.
Look, I don't dislike "New Wave" exactly, but the one time I watched a Godard movie previously it was so hilariously up it's own ass, it was pretty much unspoofable (for the record, it was Godard's King Lear).
I've also been aware that thanks to Godard and his buddies, we even have the term "film noir".  They loved the same crime melodramas of the post-war period that I tend to enjoy.  They wrote about them and got people to think about that glut of crime movies in a different way.
But, because of the prior Godard experience and the endless iffy liberties of student films who think he was a master, I've been actively avoiding Breathless (1960) for a decade or so.  But I finally watched it, and it was...  not for me.  On paper, the story was fine if razor thin.  It's really all about characters, and I mostly just found the characters exhausting.
Because I didn't get the attraction to the movie, I looked it up on wikipedia, and it's sold as "a boy who thinks of death and a girl who doesn't", and it mostly read to me as "a guy who talked a lot like a guy in your dorms freshman year who thought he'd really figured things out, and a girl who's kind of vacuous."
But, whatever.  It's a classic.  People love it.
I also have to concede that it's hard to separate the movie from the fact it's been so often imitated in style, from its use of editing (that would get you a bad mark in film school), to its use of natural light and environs - the stuff of indie movie fetishism.  The stuff I find exhausting in this movie was ground zero for a thousand directors afterwards.  I kept coming back to Jarmusch, who does a lot of the same stuff if you want to get apples to apples, but I don't think we're supposed to think the characters themselves are revealing insight, it's like it happens in the space between the characters and the audience.  Here - man, I don't know.
And, of course, I am not French, do not speak French, and am over the age of 30.  All of that's going to make the movie harder for me to access.  I guess.
Anyway.  I finally saw it.  Gonna just check that one off the list.
Posted by The League at 6/08/2021 02:14:00 AM