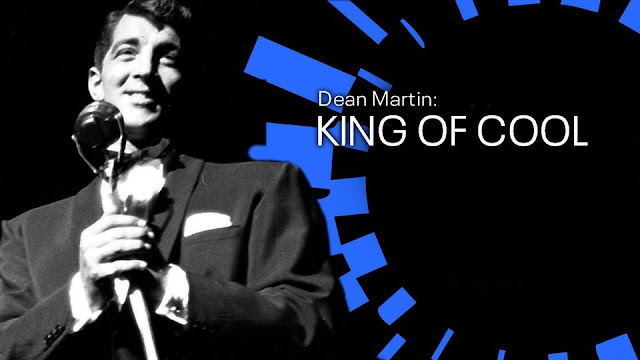 Watched:  11/20/2021
Format:  TCM
Viewing:  First
Decade:  2020's
Director:  Tom Donahue
Like any other self-respecting 1990's hipster, I have a warm place in my heart for Dean Martin.  I spend less time thinking about Martin than I do Bing Crosby, who was a huge inspiration to the Rat Pack, but - hey - one of my earliest memories is my dad singing the intro to "That's Amore" to me as he tucked me in.
I would see Martin in Rio Bravo back in college, as well as Ocean's 11, and I started to get a picture of Martin and how he fit into the culture in ways that Frank Sinatra did not.  Probably the easiest analog for us Gen-X'ers is Brad Pitt to George Clooney in the Soderbergh Ocean's films.
As a doc, Dean Martin: King of Cool (2021) works as a no-consequences sort of film.  No one is out there debating Dean Martin in 2021.  He was.  He is.  He's heard on the radio to this day, and his films are still okay.  So it's about painting a portrait of a guy who was maybe a bit unknowable, even by his own children.  And in that, what you wind up doing is - metaphor 1:  seeing the silhouette of the guy against the backdrop of what we do know, and - metaphor 2:  starting with the stone of what we know and chipping away til the statue of Dean Martin presents itself.
I am here for the central question of the film, which is "what made Dean Martin cool?  And if we know that, do we know Dean?"  Because American cool is a weird thing.  Personally, I *do* think Dean Martin is cool, while Sinatra did cool things while being demonstrably uncool.  Dean's public persona was both act and not an act (famously, Dean Martin didn't imbibe the way folks thought at the time, any more than Liberace was really entertaining offers from ladies).
And, wisely, I think - the doc openly follows the Citizen Kane model of first asking what was his "Rosebud" and then figuring out if that unlocks anything.  And, I think it succeeds.
There are terrific interviews with second and first-hand sources, as well as fans and interested parties.  Some of which have passed since they were interviewed (y'all pour one out for Florence Henderson, who was a singer and dancer on The Dean Martin Show).  But we also get some riveting testimony from Jerry Lewis' own son (who is clearly a fan of Dean Martin and has lived with... a lot).
It's also a tour of how the world changed over the course of the 20th Century, with immigrant communities in mid-sized cities to vaudeville/ night clubs, to the music industry to film to television (White Christmas always felt to me like it was clearly intended to star Martin and Lewis, so it chose just to hint at them).
But it's also a story about a guy who - as much as Frank - did things his way, even in the spotlight with Frank.  Like anyone with years under them, Martin doesn't paint a consistent picture, and it's something of a relief to watch a doc that interviews people who can live with that.
Of course plenty is made about Martin's family, more than his affairs which the only hints at via a sentence or three.  The interview with daughter Deanna Martin is probably the real spine of the doc.  She seems to have perspective on her father, while also still loving him deeply, and maybe figures out what his Rosebud actually is by film's end.
Posted by The League at 11/21/2021 05:48:00 PM