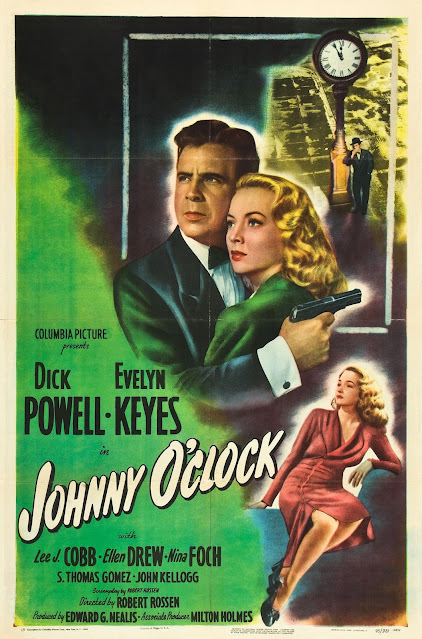 Watched:  11/22/2021
Format:  TCM Noir Alley
Viewing:  First
Decade:  1940's
Director:  Robert Rossen
Well, Johnny O'Clock (1947) is a ridiculous name for a movie, and a character.  But here we are.  It's maybe not a shock its hard to take seriously when I saw Johnny Dangerously years before I'd see a gangster or noir film the 1980's comedy was looking to emulate.  But Johnny O'Clock is not a comedy - it's a straight film, but packed with plot, schemers and some very deeply rat-a-tat hard boiled dialog.
It's not a great movie, and it's entirely wrapped up in its own plot so much, it kind of forgets to do much with characters after an initial impression, but...  I think Muller's take on it intersects with how I felt.  This movie felt like someone had read a lot of snappy dialog in novels that didn't quite make it to the movies and wanted that to happen.
Everyone has an agenda, and everyone is willing to play for keeps - and by the time we show up as an audience, a lot of balls are already in motion.  We're just watching the Rube Goldberg machinations go through their motions.  So just buckle up and watch.
I've been a Dick Powell fan since seeing Murder, My Sweet a long time ago, and sealed the deal with Cry Danger.  I am not against his song-and-dance-man persona that predates his move into noir, but I prefer him as the sardonic voice centering a crime film.  And, of course, the film has Lee J Cobb as a cop on a case, super-actor Thomas Gomez and noir-favorite Evelyn Keyes.  The movie also includes a very early appearance by Jeff Chandler.
I.. am still not sure why a key character is murdered early on in the movie, the flashpoint for everything else in the movie.  They sort of suggest "oh, she might have known something so we bumped her off", but...  why would they think that?
ANYWAY.  Maybe not the first noir I'd suggest someone rush out to see, but it still played well.
Posted by The League at 11/22/2021 01:47:00 AM