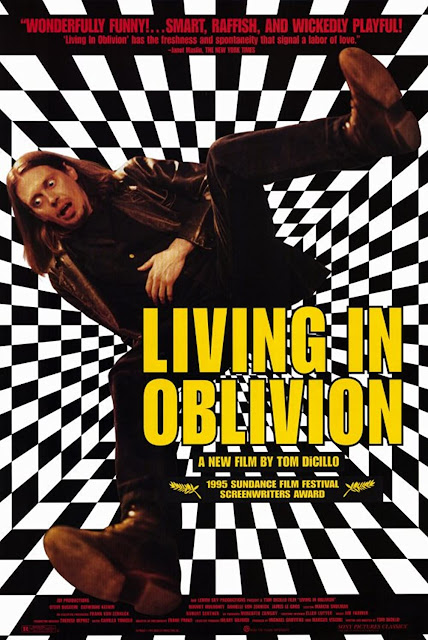 Watched:  01/19/2022
Format:  HBOmax
Viewing:  Unknown
Director:  Tom DiCillo
In August of 1995, I entered into Film I, joining the "production" track within my university's film school.  That Fall would see a lot of changes, and I mostly remember a lot of exhaustion, a lot of learning-on-the-fly and getting to handle actual film cameras for the first time.  As well as editing, cutting and screening work I did mostly in collaboration with others.
Living in Oblivion (1995) was released during the middle of the 90's indie boom, and maybe was just a little too indie to break huge, but it does seem like a movie that a lot of people saw back then or since.  A film about filmmaking, but not in that way that Hollywood likes to reward with Oscars, Living in Oblivion hit all of us in that Film 1 class where we lived, realizing our dumb little misadventures behind the camera were just how this business was going to work.
It's also a fascinating entry in mid-90's cinema for starring Steve Buscemi as very 90's film director, Catherine Keener as an indie starlet who recently had a brief scene in a Richard Gere feature, Dermot Mulroney as the DP, Kevin Corrigan as the camera assistant, James Le Gros as a big Hollywood star trying to earn some indie cred, and Peter Dinklage as an actor who has just realized why he's been called in and he does not like it.
I'm not sure it was actually a big break for these actors, but aside from Buscemi, it was the one where I recognized the others from afterwards.
Look, filmmaking is a grind.  It's very hard, risky work with no guarantee of payoff and a million ways things can go wrong.  The film essentially works in three parts, and it's unclear what's a dream and what's actually occurring as we see a movie, "Living in Oblivion" as separate sequences, none of which seem to have anything to do with the other, and all of them may be dream sequences, including the dream sequence they're filming in the final sequence.   And maybe none of it's real and it's all a dream about wanting something very, very badly.  Even if its just a diner hamburger.
And the movie is hysterical.  I hadn't seen it in forever, but put it on as I was sitting up with my dog who wasn't feeling great, and expected to watch a few minutes, and blew right through to the end without pausing or stopping the film.  The characters are so well defined and buyable, the frustrations and mishaps too real, and the force of so many people coming together to try to make magic one shot at a time so utterly complicated, it's amazing movies exist at all - and this movie gets that in a way that feels honest and ridiculous.  I mean, we've all been a part of a group project.  This is that, every day.
Posted by The League at 1/20/2022 10:55:00 PM

There's a pretty great commentary track on the DVD with Director Tom DiCillio. He talks about how he made the first part as a short film and then decided to extend it. He even got the actors to pay to be in it.

holy cow, that makes so much sense. I mean, that it was a short film. I noticed some marginally different hair cuts this time between the B&W part and the color sections, so that totally tracks. I'm gonna track down that DVD.