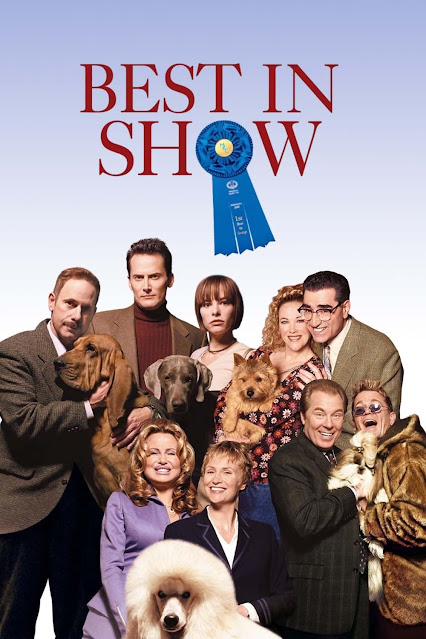 Watched:  01/18/2022
Format:  HBOmax
Viewing:  Unknown
Director:  Christopher Guest
As much as I like all of Christopher Guest's work, this is my favorite.  Maybe.  That'll change next time I watch another of his films.  But Best in Show (2000) has... Jennifer Coolidge.  I mean, that's a big advantage on everything.  But I think this is also the first Jane Lynch role.  And, of course, the movie inadvertently changed the course of actual dog show broadcasts forever by inserting Fred Willard as one of the commentators of the fictional Mayflower dog show (The National Dog Show, upon which the movie is based, began including Seinfeld's John O'Hurley shortly after.  And he's great!).
Look, you can IMDB the names in the movie, and they're all great.  But I do think that the third act is almost entirely the day of the show is a great idea and manages to play through what we've seen of the characters to this point and manages to remain hilarious (Posey's meltdown in the hotel and then the pet store is a highlight for me) while also wrapping up the narrative.
The characters are so specific but instantly understandable.  And short Posey and Michael Hitchcock's characters, the movie isn't ever really dragging anyone - but even those characters are so... ridiculous, you want to watch them, anyway.  Everyone's kind of goofy and absurd and even if a bit prickly, you get it.  Everyone is adding something specific and really bringing their A-game (even Will Sasso with maybe 2 minutes of screentime, has a deeply memorable bit).
I can't be objective about the movie.  I've seen it maybe 15 or 20 times, even if it's been a while.  Not everything has aged gracefully, but I think it holds up.
Posted by The League at 1/20/2022 11:19:00 PM