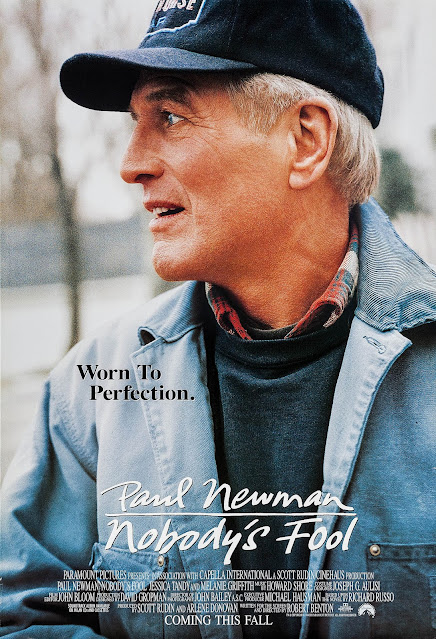 Watched:  04/05/2022
Format:  HBOmax
Viewing:  Third
Decade:  1990's
Director:  Robert Benton
It's been decades since I've seen Nobody's Fool (1994), but it's a movie I saw in the theater twice and a few times after.  I recalled feeling weirdly and profoundly moved by the film and was unsure how it would sit as I'm closer to the main character's age than the grandson's age at this point.
On first blush, the movie could be read as some smalltown schmaltz, but reviews of the time were overwhelmingly positive and reflect a lot of how I felt about the film at the time.  It takes place within the kind of small town romanticized by politicians in ads, of Main Streets and "working people", but it's also frank that small towns are kind of hard, that it's not always the pathway to the achievement of the American Dream and when you know everyone in your town, it can get weird.*
To that end, it's a reminder of a kind of film you don't see as often these days as it's a quiet, thoughtful ensemble film where actors seem to be enjoying the work, a few name Hollywood types playing supporting roles just to be there, in the mix with up-and-comers and character veterans.  Of course, anchored by one of the best of the post 1950 American cinema, Paul Newman, still handsome and better than ever when it comes to what he does, which is say a thousand words with a glance or even in stillness.
Newman plays Donald "Sully" Sullivan, a guy who never quite got ahead, who does odd-jobs, rents a room in a decaying Victorian, and ends his day at the same bar every night.  He's a failed charmer, stubborn to a fault, and picks the wrong battles.  He's remarkably similar in many ways to who you might see in the mirror.
For those looking to remember how good Bruce Willis can be, he gets to play the 40-ish frenemy of Newman's 60-ish "Sully" - the chief of the only construction game in town, who has inherited the business (and seems to be running it into the ground), which Sully depends on for his livelihood.  Melanie Griffith is used possibly the best in any movie I've seen her as Willis' long-suffering wife who has an age-inappropriate flirtation with Sully.
As the up-and-comer, Dylan Walsh was breaking free of being the youth and moving into his "I look like young faculty" period, here playing Sully's son, whom he more or less abandoned to his mother as an infant.  And Walsh, for having all the clunkiest dialog, manages to handle it with grace.  (It is a sign I'm now An Old that Walsh, who was a Gen X actor, is now playing Grandpa on Superman and Lois).
And as the Hollywood legend, Jessica Tandy in one of her final roles plays Sully's former 8th grade teacher-cum-landlord, with whom he shares a house.
It's a pre-9/11 movie from an America where folks were aware of their differences but it was small potatoes.  You kind of knew you were all in it together.  You need each other for work, for looking out for each other, and you need to adjust in big and small ways to everyone around you.  And that, in many, many ways is what the film is about.
But it's also about generational trauma (sorry, Pachinko, you don't have the lock on this one!) in a way that feels like a more accessible version of what William Kennedy was on about in those books that you may know from Ironweed (and some smart person would option and make a series of movies for Amazon or HBOmax).  But it's also not overwrought, Newman bringing an organic approach to the story.
In many ways, it is the movie that Very Serious Film People are right to be concerned could disappear are very specific forces at work in the movie that would be incredibly hard to replicate today.  There's not enough here for 8 hours of television, and it's hard to imagine the funding for today's equivalent of the cast they have.  It's a 2 hour story (though it wisely doesn't provide perfect 2020's movie-closure to every storyline) and that's it.  In retrospect, how did this not co-star Charles Durning?  Wasn't he legally required to be in all of these movies?
But the size and scale of the film is probably happening all the time these days, just with absolutely no promotion, just making the film fest circuit and getting dumped on streaming services with no fanfare.  It's more than okay to have a movie that doesn't globe-trot or deal with massive political issues - that's not where 96% of us live.  We're scraping by day-to-day and dealing with the people around us, and understanding their faults for what they are.
Anyway, I dig it.  In some ways, it's incredibly 80's and 90's in pacing and character and what it expects people to just deal with that now would be treated very differently.  And, of course, I'm not sure The Kids would quite get the frenemy-ness of the Willis/ Newman relationship, but maybe when they're older.
Anyway, highly recommended.
*the smallest town I've lived in was Austin in the 1980's, but I spent a few weeks every summer in Negaunee, Michigan, which is usually about 4200 souls.  It gave me some taste for what it's like at least for the people who live there.
Posted by The League at 4/09/2022 12:42:00 PM