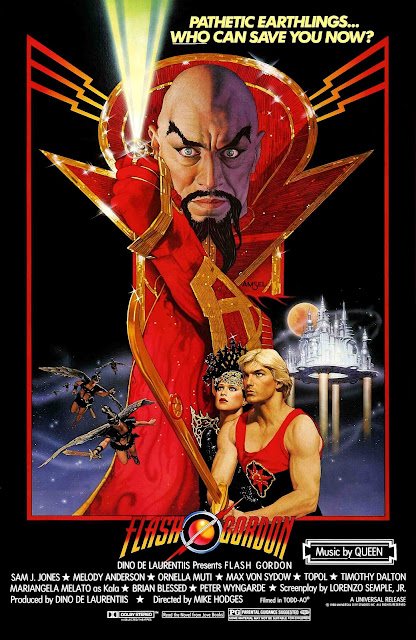 Watched:  04/01/2022
Format:  Amazon Watch Party
Viewing:  Unknown
Decade:  1980's
Director:  Mike Hodges
In a lot of ways, Flash Gordon (1980) maybe came out at exactly the wrong time and set the tone for what would be a problem for comic-based material until X-Men in 2000.
With Star Wars and Superman released to critical and financial success, Dino De Laurentiis began mining the properties that had influenced the creation of both properties and set the tone in Hollywood that Marvel and DC couldn't get anything green lit for years - but somehow pulp characters would get movies.*  As The Incredible Hulk and Wonder Woman disappeared from TV, Buck Rogers showed up on the small screen, and De Laurentiis went and tapped Lorenzo Semple, Jr., one of the main brains behind the 1960's Batman series, to bring Flash Gordon to the big screen.
We're only 14 years off from the Batman TV series at this point, and for those of us who were around in 1980, comics, sci-fi and fantasy weren't just "nerdy", they were largely considered embarrassing/ for mental deficients/ sure to make you a pervert.  Really, apply whatever you want, because some teacher was sure trying to do so!  Culturally, the Batman TV show had somehow had a completely different level of impact than Wonder Woman and the Hulk, and if you mentioned literally any super hero, folks were saying "Bam! Whap! Pow!" at you still in 1987, if memory serves.  Even Wonder Woman was originally more comedic than it would be by the end of the first season.**
So... apply that same Bat-writer to Flash Gordon, and then write what appears to have been gigantic checks, and for some reason ignore the fact that Star Wars and Superman took their subject material entirely seriously and audiences followed suit - and we get what is the spectacular that is Flash Gordon.
That said...  I think this approach killed the movie at the time, but it clearly struck a chord with enough of us that people still watch the thing.  And I honestly have no complaints about the results, accepting the movie for what it is - a coke-driven moonshot of a film that could just as easily have been embraced by the critics and the public.
Recently, Danny talked about the movie at Superheroes Everyday, and I am sad to say, I can't go along with him.  I get it - this movie is not everyone's cup of tea.  I encourage you to read his take, because mine is not that.  C'est la vie. Vive la différence.
Every time I watch this thing I'm, like, "holy shit, they made this movie".  It's as big a production as near anything else you were going to find in 1980, with a budget of $35 million in comparison to Empire Strikes Back at a reported $30 million (I mean, who really knows), and with Max Von Sydow the biggest star - which means most of that money had to have gone into sets, FX, Brian May solos and probably De Laurentiis' personal secret stash, but whatever.  But it DOES bring a fantasy world to life in glaring technicolor.  Everywhere you look there are gigantic sets, fabulous wardrobe, alien creatures, rockets that look passible while also realizing the vision of the budget-conscious look of the serials and maybe Alex Raymond's vision in the comic strips. 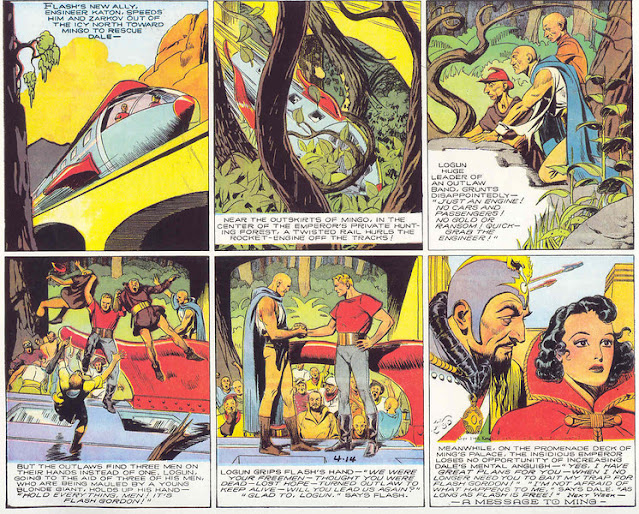 The original Buster Crabbe starring serial was combined into a pretty spiffy single film called Rocket Ship.  If you want to see what they were thinking/ referencing with the 1980 film, it's worth checking out.
It's not that the studio for the serial couldn't recreate the look of the comic strip, but the budget fell short of Gone With The Wind at the time, and so there's a lot of "we raided the wardrobe department for the concrete version of the thing Raymond was riffing on and now we're borrowing sets".
What you see below is 1936.  Two years before Superman appeared in Action Comics and 7 years since the pictures started to talk. 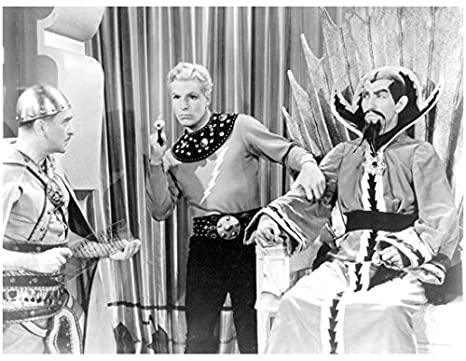 But we're here to talk the 1980 movie.
Lavishly shot and produced, the film looks to have been originally shot in 70mm on the TODD-AO system, and - as I will never get tired of mentioning - Queen wrote the music.  And to this day, the soundtrack is a banger that carries the movie in many ways.
The cast is a weird mixed bag.  The mononymous "Topol", most famous for playing the lead in Fiddler on the Roof is our Dr. Zarkov.  Fan favorite Timothy Dalton is the very Dalton-y Prince Baron.  Brit-staple Peter Wyngarde is Klytus.  All-purpose embodiment of joie de vivre Brian Blessed plays Voltan, king of the Hawkmen.  80's TV star Melody Anderson is cute as Dale Arden, but cursed with a hair style that existed for about 20 minutes and will be the main thing to date this movie forever.  And, probably of more interest to a segment of the population, Ornella Muti is Princess Aura.
It is a buckwild choice to have cast Sam Jones as Flash and make him not just act like a cheerful idiot.  Is he great at what they asked him to do?  Or terrible at what they asked him to do?  We can't really know.  There was a dispute between he and the producers, and it's not even his own voice in over 50% of the movie.
Max Von Sydow as Ming is perfect casting for what they're doing, which would now set a million 20-somethings on twitter into a rage spiral.
The movie follows the basics - Earth is assaulted by a cosmic force so Dr. Zakov recruits Dale and Flash into a rocket ride to check it out.  And they fall into the despotic world of Mongo and its many moons, each a different habitat with a unique people and culture.  Flash and Dale are in love immediately, Princess Aura wants her some Flash, but will take Baron.  Ming is a huuuge asshole.
Nothing is ever really at stake, which it can't be if we're counting on our three Earth-dopes to save the day (God bless Topol for really leaning into Zarkov), which is good since the Earth is going to explode off-screen if Flash doesn't save the day.
The movie is remarkably horny.  I guess this is what happens when you bring in DeLaurentiis and Semple Jr. doesn't need to worry about the FCC.  My memory is that the sexiness of the movie is why my folks didn't take me to see it as a 5 year old, so I guess I delayed whatever kinks I was going to get from this movie by 15 years when I finally did see it.  But, observing the panels in the comics above, the sexuality of the movie is also mostly baked in to the concept in a way that American super-hero comics would mostly take til the 1970's to getting around to discover (and then, hoo boy, look out).
I won't catalog the various incidents along the way, but there is a scene that's more or less a dominatrix whipping Princess Aura for Klytus' delight, and its square YMMV territory.
For me, I can't say that this movie succeeds or fails.  If your rubric for what this was supposed to be was a dead serious sci-fi/ fantasy film, those tend to end up as dour posturing 7 out of 10 times, and that's not Flash Gordon.  But I also am not sure the camp here is as well defined as Batman, so it looks in part like the things camp is camping rather than what I expect director Mike Hodges and Semple thought they were doing.
The challenge now for a remake is to get folks to understand that Flash Gordon came first (so to speak).  This was widely understood in the 1980s, but today's kids think everything before Iron Man is a blur, and we saw how that impacted impressions of John Carter, which predates Flash Gordon by more than 15 years.
*my personal theory is that Hollywood execs of the 1980's had likely grown up with Flash Gordon and The Phantom and didn't associate those characters with the comic book Senate investigations.  But they also had been in their prime when Batman was on the air, so they thought the best possible tack to take was to make everything a spoof of the original.
**the villains in early episodes were folks like Kenneth Mars and Red Buttons
Posted by The League at 4/07/2022 10:28:00 AM