Harvey Pekar Merges with the Infinite

I was telling some folks earlier today that I was surprised that I had a moment when I read the headline.

But, then, it kind of makes sense that, even as casual a reader as myself, might feel they knew Pekar little. To read Harvey's comics (most of which existed under the title American Splendor) was to get to know at least some version of the man. The comics were vastly autobiographical, honest, and unflinching. Sometimes funny, sometimes not, sometimes tough to read when Pekar shared his day-to-day, especially in Our Cancer Year.

If you haven't read American Splendor comics, pick up a collection or two, and if you aren't going to do that, then, for the love of God, rent the movie. The movie is actually just really, really good and stars Paul Giammti in most scenes, but it includes interview footage with Pekar, his family and the folks around him.

For a guy who outwardly seemed gruff and likely a little tough to deal with, its a bit surprising that the man more or less pioneered autobiographical comics, something that's become a huge staple of the indie comics and web comics scene. And, not to bag on anyone's efforts, Pekar is still largely unmatched. He wasn't enamored with making himself seem clever, or his life seem hip (good Lord, no), but he did like to catch the details of the everyday in a way authors, documentarians and Pekar's fellow cartoonists could only dream about.

That's a tough thing to do, and to keep it as honest as Harvey did, even through chemo and all the rest... kind of amazing. 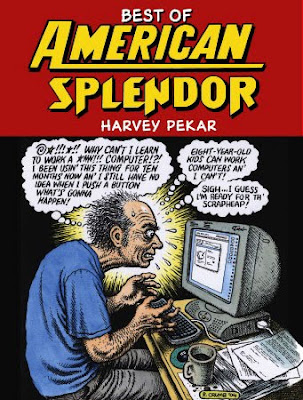 Oddly, Harvey was never the artist of his own comics, but to work with Harvey who had started his work with R. Crumb, became a sort of thing. And to capture what Harvey was trying to put into his comics seemed to be a challenge artists wanted to rise to.

In his last few years I think Harvey enjoyed a little boost in personal fame and popularity. I'm not sure how much it helped with what seemed to be his anxiety over finances, etc... but I hope he came to see that there was a large audience out there that loved his work.

So long, Harvey. Thanks for changing comics.