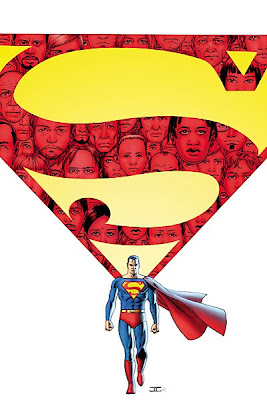 Superman #701 was released this week. Written by J. Michael Straczynski and drawn by Eddie Barrows, it's the first issue of what readers have already been told will be a 12-part saga of Superman walking from one coast to the next, crossing the US of A.

The reaction from comic fans, including many Superman fans, was abject horror. Of course, these days, if DC promised a $100 bill tucked into every $3 issue of Superman, comic geeks would rush to the message boards to insure that the world was on notice regarding how irrelevant and outlandish one MUST find Superman (while promoting the realism of a guy in a bat costume who swings from the sides of skyscrapers and can do anything the story dictates. Or, of course, Wolverine, the Punisher, Dr. Strange...).

As of this writing, I haven't picked up my copy of issue #701. So I can't comment much more on the issue other than to say that: while I like my superhero battles, and can totally get behind something that's non-stop action like Blackest Night, I always appreciate even semi-botched attempts to try to better define character through actions taken and intention in the story itself, and not just "look at Superman proving his mettle in the heat of battle".

Admittedly, these days I'm also becoming more and more aware that the definition of "hero" in comics and, I guess, cinema has been so shaped by the paramilitary fantasies of the late 1980's and 1990's that many of the ideals upon which the characters of DC Comics were founded might not make sense to a modern audience. Very simply, the same mindset that can't understand why Superman didn't use his heat vision to melt lex Luthor from orbit in secret isn't going to be very open to "what does it mean for a superman to walk the earth, reminding himself of the people he's supposedly helping with all of these usual fisticuffs with aliens and super scientists?"

On a slightly different tangent, this post started a few days back.

I found this quote at Robot 6, but read the interview at The Quietus

Have you turned your back on superheroes now?

AM: I'm interested in the superhero in real life, but not the comic book version. I've had some distancing thoughts about them recently. I've come to the conclusion that what superheroes might be — in their current incarnation, at least — is a symbol of American reluctance to involve themselves in any kind of conflict without massive tactical superiority. I think this is the same whether you have the advantage of carpet bombing from altitude or if you come from the planet Krypton as a baby and have increased powers in Earth's lower gravity. That's not what superheroes meant to me when I was a kid. To me, they represented a wellspring of the imagination. Superman had a dog in a cape! He had a city in a bottle! It was wonderful stuff for a seven-year-old boy to think about. But I suspect that a lot of superheroes now are basically about the unfair fight. You know: people wouldn't bully me if I could turn into the Hulk.

Leave it to Alan Moore to soundly express an idea I've had churning in my head for, oh... about five years now.

So its interesting to me that when DC Comics decides that Superman (who people barely read, anyway) is going to take part in a story that isn't about beating some threatening bad guy until he quits trying to kill Superman and/ or other people... the reaction from the interwebs has been nothing short of openly hostile in many cases. And, of course, the geeks trying to point out that a character in some other story in a comic they once read did something similar (apparently missing the fact that in the pages of Batman, Tony Daniel just redid every Batman story from the mid-1990's to 2006).

And, yes, Superman is the example of tactical superiority, but that was always the point, back to 1938. He has the power, and its all about how you choose to use it. What wrong would you right? And how do you recognize a true wrong? And just because you can punch a hole in the side of a tank, is that the best way to help?

Certainly part of my fascination with Superman has extended to the bizarre world developed around the character during the 1950's and 1960's, and the wild ideas the creative teams worked with. Sure, some of its lifted from elsewhere, and if you want to believe that the coolest superheroes are the ones with lots of pockets and guns the size of a Smart Car, then you're going to likely not see the appeal.

Still, it was an interesting bit of food for thought from Mr. Moore once again.

As I mentioned, I haven't actually read that issue #701 as of yet. I truly hope JMS does okay with the issue. I've heard mixed reviews, and seen some pretty darn nitpicky complaints online already, to the point where you wonder exactly what the creative team could have possibly done that wouldn't have drawn this kind of ire. No matter what, I'll likely forgive them for any flaws, and be happy they tried something a bit out of step with the standard villain set up. But I'll review the book, I guess, and try to be as honest as possible.
Posted by The League at 7/16/2010 12:03:00 AM

Every time you write about what's going on among the fanboys in the forums, chatrooms, and comments sections of the internet, it just tends to reinforce my belief that a large percentage of these people are just a whiney, immature, ridiculous lot. The fact that the comic industry is caught in a sort of symbiotic relationship with these people is one of the key reasons that I tend to want to stay away from comics altogether.

Yeah, it's definitely not healthy for the industry itself. Its also worth mentioning how much the industry relies on a handful of comics news sites with a social media component for publicity, so to keep up means you're looking at a constant barrage of this sort of thing.

I definitely miss the days where I just bought what looked cool off the shelf. And I'm sort of feeling myself disengaging and heading back that direction. Not sure what that would mean for this site.