Yesterday we spent the day helping Wagner move into her new pad down here in South Austin, so by the evening, I wasn't excactly pressing Jamie to make sure we got a night out on the town.  An order to Domino's later, and we had our evening mapped out.

I'm no true Trekker (I'm more of a Trekkie), but I love some original-cast, original-series Star Trek.  For Christmas, Jamie had got me a Blu-Ray set of the first 6 Trek films, some of which I haven't watched in years.

I think we all knew about Trek growing up, but I wasn't really sold on the premise until 1984, when my folks moved us to Austin and Trek ran every weekday afternoon on the local UHF channel, KBVO.  No need to recount much more here, as, thanks to the power of the internet and 8 years of blogging, I've already done so elsewhere.

But what I would recount here is that seeing Star Trek IV: The Voyage Home in the theater was an eye-opening geek-tacular experience in my youth.  Yes, its the sit-com episode wherein the crew travels to 1987 to recruit some humpback whales in order to prevent an alien intelligence from accidentally destroying Earth with their megaphone.  But it was also the movie where people were so excited, they were cheering, standing up to applaud, etc...  really, pretty incredible.

The movie holds up remarkably well, and the Blu-Ray edition I have cleans up all the fx and optics that had gotten a little funky over the years.  The plot is, perhaps, a little silly, but its good, clean fun, and does what sci-fi does so well, and that's uses a metaphor to explain the issues of the day (ie: we need to be careful how we deal with our planet and the species we share it with, as we cannot predict the tragedy their loss will bring us).

Also, it gives us all the line we use (inaccurately) when we see ourselves flying into the Bay Area:

Kids today won't get the scant Cold War references either as Chekov gets picked up as a Russian spy on our naval vessel, the USS Enterprise, nor the stalemate of Federation vs. Klingon that plays out in the bookend scenes.

Its also unfortunate that we don't get a bit more time to explore the Enterprise crew dealing with the late 20th Century or get more cultural comment (and it is kind of hilarious that the single-use device, the communicator, is the size of a brick).  But I can say that to this day, when my computer at work does not do as I say, I still find myself repeating Scotty's condescending "hellllloooo, computer...".  (Yes, I work on Windows machines.  Don't judge me.)

Anyway, I still love this movie.


Oh my Goodness, Rita Hayworth
After Jamie toodled off to bed, I watched Gilda, a post WWII decidedly noirish flick about everything from tungsten cartels to romantic obsession, to philiosophizing men's room attendants.  Starring Glenn Ford and Rita Hayworth, its a reminder of what an "A" noir looks like in comparison to, say, 5 Against the House.

I'd pose the question of whether or not the movie would have been made without Casablanca as a predecessor, as it seems a product of somewhat similar setting, characters, etc... only without anybody having anything honorable to fight for, and sinking into noirish territory rather than the turn to the just-cause that Casablanca provides as the alternative.

It does, however, feature Rita Hayworth as Gilda, the quickly-obtained wife of a shady night club owner, who has good reason to butt heads with his strong arm, Johnny Farrell (Glenn Ford).  There are some comparisons one could make to the Coen's development of the Tom/ Verna/ Leo triangle in Miller's Crossing, although here its all a bit more...  tuxedo-clad.

The role of Gilda is remarkably well-written, with some seriously snappy dialog, and became the role Hayworth would be associated with for the remainder of her life.  She would also inspire looks and other characters in countless movies afterward.  And I find it hard to believe Jessica Rabbit, and countless other "oh, that woman singing is trouble" scenes would have existed without Put the Blame on Mame. 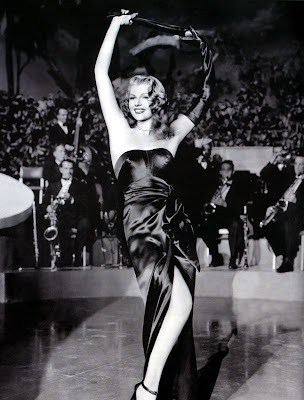 Its definitely a film I'll want to watch again, and not just because of Rita Hayworth.  There were a lot of plot threads, some things I'll want to see again as per how whole scenes were thought through (such as the use of disguises during the Carnival sequence), etc...  Its a smart, clever movie and I can see why it turns up in so many lists.

As easy as it is to just want to applaud Rita Hayworth for her Hayworthness, Glenn Ford and George Macready are also both really good as well.  I haven't seen all that much of Glenn Ford's work, but I can see why he was a popular actor.
I hear San Antonio residents will be able to see it on the big screen this summer as part of the TPR Summer Film series!  So, you know, go check that out when NathanC begins promoting the film season.
Posted by The League at 2/27/2011 12:44:00 PM

After re-watching Abrams Star Trek on a flight recently, I can't tell you how excited I am for Trek to be on Instant View on Netflix. They haven't officially announced what exactly is going to be available other then episodes from all the different flavours will be on there.

Didn't I see that with you in the theatre? I know we saw Iron Eagles together, where the crowd was cheering.

dude, yes! you WERE there!