He's the only guy you see in the the original trilogy talk smack to Vader, and, of course, things go poorly for him.

Once Mr. LaParmentier was on the bill for Saturday, it kind of became a thing, and Austin Books held a very special Star Wars Day!   I couldn't believe the crowds, and I really couldn't believe the numbers of kids.  Man, little boys and girls still really like Star Wars.  And that's pretty cool.

I'm not the Star Wars fan I was until, well...  Episode I was released.  But I still like a good Storm Trooper, and I'll always have a warm spot in my heart for the original trilogy (and Princess Leia).

I realize looking at these pictures that I waited too long between haircuts, but this is me getting an autograph from the man himself. 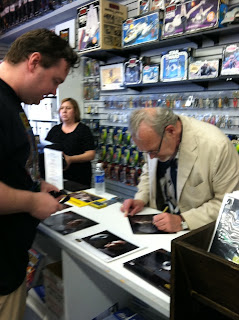 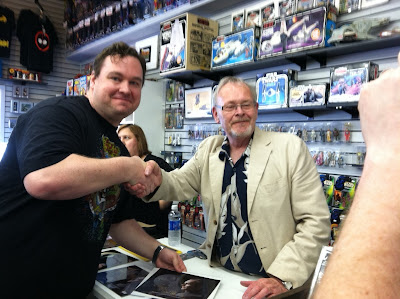 I'm not going to scan it, but the picture I had him sign was his profile with the Death Star.  He drew a neat little arrow and wrote "my office", pointing to one of the little blips of light on the Death Star.  Very clever guy.

He's not looking at the lens in the picture because Jamie and The Doug both lifted cameras at the same time.  So, stereoscopic pics, I guess.

Speaking of Jamie and Doug, they got to meet one of their favorite stars of the movies.

I ran into ObiWan while he was looking at some prestige art books.  He was kind enough to have his pic taken, but I got to say...  I think I have a foot on the Jedi Master.

What I also learned is that when Vader and the 501st show up, you don't take a page from General Motti's book and confront Vader about his policies and hokey religion.


Luckily, Vader did not choke me out.

Anyway, it was a really fun time!  And it was great to see so many folks out enjoying the nice day and the fun ABC put together.

I didn't stick around for the signing by the comic writers for the Star Wars comic (not sure when that happened) and I didn't stick around when BioWare came by to recruit for QA personnel.  But I think we had a grand time. Austin Books has been a great shop for years, but now its becoming also a hub of pop culture madness here in town.  And its kind of great.

That Doug and Jamie sure look a lot alike.

Yes, the McBride genes are strong in those two.

I think the Dark Lord of the Sith could stand to lose a few pounds.

Oh, heck. As someone who squeezes into a Superman outfit every year to hand out Halloween candy, I got not stones to throw.