Its mostly true that Action has mostly been a monthly comic over the duration of its printing life, but it's not true that Action has run 900 issues over 900 months.  There was a year or two in there where Action Comics was released as a weekly comic with a Superman lead feature and then back-ups featuring Green Lantern and other heroes.  There have been stunts where Action wasn't released for a month or two, which I believe occurred during the Death of Superman event back in the early 1990's, and in the mid-00's, Action went hopelessly off production schedule for a while and just didn't come out for a few months around 2007.

One of the things I'm not sure the kids will ever quite understand about those of us born with one foot solidly in the 20th Century is that we know things don't last, and so its all the more amazing when things do go on for a while.  In the era of the internet, we've come to expect the comings and goings of things and ideas, buying, selling, merging...  Nothing is started now that we'd expect to be around in 73 years, let alone 5.  Not that anyone expected Action to be around now, but...  it is.  And that's amazing.  And its not just things on a screen or some file we're worrying about forward migrating.  Out there are 900 issues of a periodical.  Reprinted, collected?  Yes.  But the originals are things out there that were made and bound and shipped and existed and you can buy one now and hold it in your hands and its 1942 unfolding in front of you.

In the spring of 1938, kids might have had a radio at home to hear, but the stories were gone as soon as they came across the air.  Newspapers belonged to the folks, but they could maybe cut out Prince Valiant or Barney Google from the pages of the paper and paste them into a book if they wanted to have a book of their favorite comics or characters.  No TV at home, unlikely they'd be listening to radio on the street.  But they could read, and they could seek out what they wanted for their own (or to trade with a pal) at the drugstore or elsewhere.  For a thin dime, kids were learning they could walk to their local news stand and pick up a book of newspaper reprints or maybe some cheap original funny comics, or an action story about a lion tamer or magician.  And then...

Superman burst onto the scene and changed everything by hefting a car, slipping in and out of a secret ID and doing it all in a red and blue suit that popped on the page like nothing else.

Its not that Superman was an entirely new concept.  He was created by two kids who borrowed liberally from the best sources:
But in Superman, the combinations were all correct.

I can't quite get what it must have been to have been either child or adult looking at Superman at the time, but from anecdotes, it must have been pretty wild.  Within a couple of issues, National knew newstand dealers weren't able to keep up with demand for the comic with "that Superman guy in it".  The devil-may-care attitude to injustice, physics and sensible fashion really hit a nerve.  This was before they gave a full account of Superman's origin, by the way, nor could he fly until sometime later.  He didn't have heat vision, and he worked at the Daily Star.  The details would come in time.

I like to think I get some of that same excitement when I pick up an issue of Action Comics, of seeing a guy in a red cape defy gravity and turn tactical superiority into an opportunity for a better world.  And, hey, Superman can just be plain fun (if you don't believe me, I highly recommend you check out the old George Reeves Superman TV show).

And for generations now, from before World War II to today, kids and adults alike have reached for Superman comics.  900 issues and 73 years later, Superman is still lifting cars and trying to make time with Lois Lane (and the way Gary Frank and Pete Woods draw Lois, who can blame Supes?).  I confess that when I crack open a Superman comic, like issue 900 here, I'm well aware that I'm just dipping into the stream during my time here.  Superman will forever be between the ages of 29 and 40 in monthly comics.  He'll forever be battling Lex and Brainiac.  That knowledge is part and parcel of true Superman fandom, I think.  Sure, its about how they're interpreting the concept of a Superman in today's comics, but its also about embracing the past and future of the character.

But in 1938 it really was some grubby kids with a couple of coins in their pockets, heading down to the news stand during an economic ravaging that makes today's economic turmoil look like a cakewalk, that made Superman go, month and after month.  And now that's me.  And next year, maybe it will be your kid.

In the meantime, here's one of the 3 covers released with Action Comics #900, this one by Alex Ross. 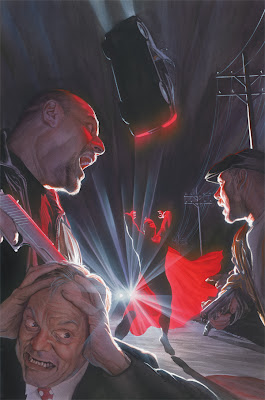 I love homage covers that play a little bit with the perspective of the original, so what a treat to get both variant covers doing just that for this issue.

Alex Ross has sort of drifted into the "been there/done that/seen it" category, but every once in a while he surprises me.

I'm a total Alex Ross nerd. I never get tired of his stuff, and I think the past few years he's been getting into some interesting territory, mixing his traditional photo-real pics with more interesting angles, lighting, etc...

The most important thing about the image is that it features Guy Freaking Out in Corner from Action Comics #1.

I was trying to think, but came up empty...

Has anyone ever fleshed that character out in any way, shape or form? It seems that if I as a writer tackling Superman, the temptation would be too hard to resist not to. Aside from Superman, obviously, it's one of the most iconic things about the cover.

If anyone is going to take it on, it'll be Chris Roberson. I will see what I can do...