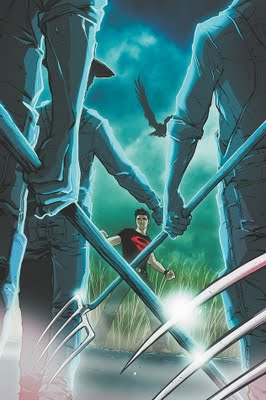 I realized I'd been doing a terrible job of covering Jeff Lemire's Superboy in my reviews (because you people care), and I know I missed issues 7 and 8, so I'll just say - we're reaching the third act of the storyline that Lemire began establishing in issue #1, and plot threads are coming together. Simon Valentine's future is exposed, we learn a lot more about Psionic Lad, Laurie Luthor gets involved, and we find out what's been going on in the "broken silo".

But I'm not so sure about all this.
I had the same issue with The All-New Atom when that series was going on.  I don't particularly love the mixing of a science or science-fiction based character like Superboy with magic and mysticism, especially when we've barely established the character and their status quo.  It seems almost like Lemire had an idea for a story he wanted to write, and couldn't quite figure it out, and so...  hey, magic everybody!

At its best, magic is a world of arcane rules, gifts and punishments, of wild happenings and strange characters.  But its also a chance for writers to say that things are happening "just because".  And I'm afraid that there's a bit of that going on here.

Now, that said, Lemire's writing has been fairly strong, tying plot threads together, providing strong characterization through action and dialog and excellent pacing over the 9 issues.  Such disparate threads as Psionic Lad, Laurie, etc...  are starting to come together, so its enough to keep me going and stay interested.

But I don't know why DC books don't seem to really understand how to establish a character and their surroundings anymore.  And it makes me wonder what we'll get with the September all new #1's.

Look, I'm aware that, technically, Superboy has been around for about 20 years, but if DC was honestly trying to establish an all new Superboy series as of the start of this run and plans simply changed, then why didn't DC start out exploring Superboy's feelings on, say, being alive again?  Or his relationship with Martha?  Or Laurie?  Or Simon?  And if we need threats, surely those can be fit into the story rather than overtaking the story.

I just don't know that we got a chance to learn much about who Superboy is 9 months into Lemire's series.

As per this issue, even Superboy raises the obvious question:  why didn't Superman know that there's a magic underground kingdom of the undead literally under the house where he spent the first 18 years of his life?  Hey kids, magic!  I think this just broke me.  As much as I want to like this story, this just didn't work for me and it more or less may have taken down the entire storyline (and thus, series) for me.

Anyhow, I'll finish out the series until we restart in September, and I am curious to see if Lemire pulls a rabbit out of his hat, but there's something that just never took off here.  What seems like it could have been a promising set-up with Conner Kent in middle-America has simply gotten too mired down in a storyline that feels contrived and out of touch with the needs of a new series.
Posted by The League at 7/10/2011 12:01:00 PM