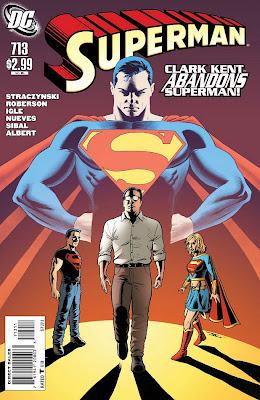 Two notes before talk more about this issue:
(1) This is the issue that follows the kitty/Muslim controversy that got Roberson's issue #712 frozen and replaced with an inventory story from Kurt Busiek's post-Infinite Crisis run on Superman.
(2)  This is the penultimate issue of the Roberson run on Superman, and while we've got one more issue, I'm a little bummed that there's only 20 more pages of Roberson's work (for now).

Just as its annoying when networks show episodes of a TV show out of order, we could have been very, very lost with the release of this issue had Roberson not done so much to make each issue episodic.  We may have missed a few story and character beats, but we're not utterly lost as Superman wanders into Oregon.  We've just missed a leg of Superman's walk, and we can only hope that the division running collected editions will see fit to include the missing chapter in the collected run.

Its unfortunate that we have to keep an odd editorial decision in mind in approaching the story, but (as we say almost daily at my office) "it is what it is".  And what it is is a really fun issue, and an appropriate one to lead toward a conclusion of Grounded, but to put a bow on the conclusion of this volume of Superman.
One of the things that's been so much fun about Roberson's run on Superman has been that its been one of the few times a genuine, die-hard Superman fan has been on the book, and that's meant no small amount of call-backs to old stories and Superman trivia.  If I have a Master's in Superman, its from some third-tier school.  Roberson is in full Ph.D mode here, pulling out references to older stories and other fun bits.

Superboy and Supergirl find Superman near a playground in Newberg, Oregon, and the three of them take off to find some privacy.  Here, Superman informs his Super-Family that the lessons he's learned on the odyssey have not been what he'd hoped for.  Listing the dangers he's caused for the public, the villains he's inspired, the superheroes he's feared he inspired to go out into danger... he changes out of his uniform and announces that he's giving up on the persona of Superman and will be helping people in secret now.

By the way, Chris Roberson is genuinely really funny.  There were bits with The Flash a few issues back, and other elements that have made me chuckle, (spoilers) but both Superboy passive-aggressively competing Kara in the first panel was great character-centric stuff, and poor Kara shielding her eyes as Superman changes into his Clark Kent street clothes and muttering about him being "depressed".  Just good stuff, and the kind of humor I think Roberson has been able to insert well all throughout - and which JMS was sorely lacking. (end spoilers)

Superman books historically have always had an element of humor (see:  Lois Lane and Jimmy Olsen getting their own series), and that's not something I'm sure many modern writers know how to write in, especially as naturally as Roberson (although Grant Morrison clearly got this in All Star).

We find Clark in a Portland "Sundoller" (the DCU equivalent of Starbucks), seemingly confident in his decision and on the phone with Perry White, letting him know he's working on his story about Superman's trek.  The barista sees what Clark is working on and suggests he speak with a local, who happens to be wearing a Superman sweater, informing Clark "Nobody knows more about Superman than him".

The story certainly works without recognizing that this gentleman is a nameless stand in for Bronze-Age Superman writer Elliot S! Maggin, or that the title of Clark's story is Must There Be a Superman?, a classic Maggin tale from back in the day. And if you're going to find someone to say "This guy knows all about Superman", Maggin is tied for first with maybe a half-dozen people (and it'd be weird to have Mark Waid running around the DCU).*

Maggin and Clark take to the streets of Portland where Clark puts his own persona as Superman on trial, his own doubts bounced off Elliot who polls people on the street about their feelings regarding Superman in response to Clark's questions.  And, of course, in invoking the themes of Must There Be a Superman? - albeit without the little blue Guardians getting all shouty - its terrifically meta and terrific of Roberson to conjure up Maggin to plead Superman's case.

In short:  I loved this.

I think as readers, we have to consider the Earth of DCU, a place where Superman isn't fictional or theoretical, but where Superman would appear on television on a regular basis, featured for his acts of altruism.  The cock-eyed, cynical view of "how can you trust a guy like that?" is history at this point in the DC Universe.  And Roberson is able to share stories large and small with meanings both concrete (Superman exposed the masquerading alien) and more abstract (but he proved the value of truth by risking quite a bit by demonstrating the power of truth).

For ourselves, the story presents Superman as a being who knows he can do good, but first wishes to do no harm, and so the decision to operate in secret and avoid the side-effects of being a large, primary-colored focal point can seem secondary to the job at hand.  But I think Roberson makes a good argument for the value of inspiration, for believing in goodness in big and small ways through Superman, and why a public face for Superman makes sense.  Even in our crazy 'ol world which is tragically devoid of Supermans running around and saving cats and fighting aliens, we can take inspiration from heroes both fictional and real.**

Sure, Roberson stacks the deck a bit here, but in the "grim'n'gritty" world of superhero comics, we see Superman winning and doing things that help people every issue.  But how often do we see what The Man on the Street thinks about that?  Not too often.  And I'd make an argument that one reason superhero comics have become about very little but superhero arms races is that so few writers remember that there are people in the streets that these brightly clad folks are supposedly working for.  Superman needs to be doing what he does for other people first, last and always.

I guess we can also forget the whole "Dan Didio hates kitties" meme from the week where issue 712 was swapped out with Busiek's inventory story.  If I bit on that, well, after however many years with Didio at the helm, I'll pretty much believe any old crazy thing at this point.  But I'm glad we get to see Superman saving kitties one more time before the reboot.

If you checked the credits, the art was accomplished by three separate teams, which isn't that surprising, given the timeline.  I don't know Diogenes, but I'm not complaining about Igle and Barrows appearing on a single book.  Nor can I complain about how Barrows worked in Igle's shorts on Supergirl right into the costume.

Another great issue, and I'm looking forward to the finale coming next month!

*And its pretty great that "Maggin" brings up the long-out-of-print Superman graphic novella Under a Yellow Sun.
**and if you missed the Gail Simone inspired Twitter meme of the week #comicsdidagoodthing - you missed some moving stuff.  Including from our own CanadianSimon (sniff, buddy.  I promised myself I wouldn't cry...)
Posted by The League at 7/15/2011 12:22:00 AM

Reading your reviews of Grounded actually have me eager to read this once it makes it to my local library. This Chris Roberson fellow has the goods eh!

Cry away, I must admit to tearing up over some of those #comicsdidagoodthing tweets.

I would never hold you responsible for what I like or don't like and regardless, I'm going to get it from the library.

I am always a little nervous when someone says they'll read something based on what I said. In my head I'm writing the reviews aimed at 2 audiences (a) other people currently reading the book and (b) for my own future reference. I can say I am aware that my tastes don't run in the same places as many others in comics, and so I am always a bit worried I'll have wasted someone else's dime. But, of course, your local library is a great solution!

Okay, now I will totally blame you if I don't like the book. Seriously, though I've read the first I, Zombie trade and the first Cinderella mini so I'm curious to see Roberson's take on Superman. Plus, I can't wait to see the transition from horrible JMS work to reverent Roberson work.

I've said it before and I'll say it again. This was partially a case of bad timing (we'd just had a however long in the Superman books with New Krypton unfolding), and partially a case of the surface level reading most fans give to comics which means there's too little room for character investigation or development and too much for idiotic slugfests.

I didn't dislike JMS's idea, I just am not sure he was ever going to be able to pull it off. People got really, really upset that at the end of the first issue Superman turns to someone giving him a hard time and asks him "what are you doing to make the world better?" People HATED that.

Yeah, no doubt JMS and Barrows could have framed it better, but there was something irrational about the reaction to Superman not just saying "aw, its okay. We're pals!" that was very telling about the audience.