The first time I saw the film Aliens, I was in a middle-school academic writing competition.

Somebody anticipated that a bunch of bored kids were going to destroy the school unless properly amused between events, and so they set up a bunch of chairs in a tiered music room, and a few big TV's all playing the same movie.  And some genius put in Jim Cameron's Aliens and then turned off the lights. 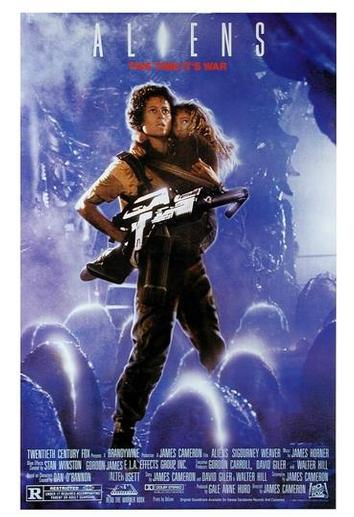 Now, Aliens is an R-Rated movie, which used to kind of mean something, especially to a herd of middle school students, and I believe we silently agreed, as kids do, that we all wanted to watch this movie and the only way to do that was if absolutely nobody said one word to the adults and teachers running the event that we all knew perfectly well we weren't supposed to see this movie.


It was the first movie I'd seen that made me sit, literally, on the edge of my seat for long stretches.  I had never seen a movie where characters were established and then killed off, so I genuinely didn't know what was going to happen.  The crowd screamed at the right places, and was otherwise completely silent for the duration.  It was a lot of fun.

If you've never seen James Cameron's Aliens, well, you're basically doing things wrong, but this one is easy enough to fix if you have a TV, some sort of home video player, and about 2.5 hours.  And be prepared for awesomeness.

You will absolutely catch me making fun of James Cameron, but, no lie, I love a lot of his work.  Terminator 1 and 2, The Abyss, and True Lies are all favorites.  I appreciate his work on Titanic, even if its not my favorite film, and I respect the hell out of what he did technically on Avatar, even if...  well, seriously...  it wasn't a very good movie in a lot of ways.

Aliens, however, holds up like crazy.  He brings back Bill Paxton, Lance Henriksen and Michael Biehn from the Terminator movies, and brings back Sigourney Weaver who starred in the phenomenal Ridley Scott directed original (which is a very, very different kind of movie).

The movie features those great actors, but it also features the stunning design work of HR Giger for alien and set design (I note the great Syd Mead is listed in the credits), and with its predecessor, Alien, completely changed the aesthetic for sci-fi in movies, TV, comics, etc...   The movie didn't sport laser guns and lightsabers, but kept to tech that seemed possible for the future when viewed from 1986 (some of which has since been surpassed), and devices which seemed plausible.  Yes, even the power loaders.

As SimonUK said to me as the lights dimmed "the last 30 minutes of this movie is the best 30 minutes of Cameron" and maybe one of the best sequences in sci-fi and/ or action films, in general.  I think about Ripley reaching the platform with Newt in tow, and Bishop has flown the ship off... and the world is melting around her, about to go thermo-nuclear: those are stakes, people.  And the movie is super-tight, with all the pieces tying together nicely.*

Most importantly, and I don't think I'm overstating this, Aliens was a watershed for me as a kid to see a lead played by a woman in an action movie with no winks or nods, and to treat that character as a three-dimensional, actual person, even in a movie about aliens brewing trouble on distant space colonies.  Watching the movie again, I'm still impressed by Weaver as Ripley, as both the only one with her head in the game (until its too late) and the honest place the character comes from at all times.

Maybe one of the best unspoken scenes I can think of in any genre film, the meeting and face-off with Ripley and the Alien Queen is just unbelievable.

This week The Paramount double-billed Godzilla with Them!, both 1954 atomic-age-scare flicks and Aliens with Star Trek IV: The Voyage Home.  That's lovely, but I think the accurate pairing is to co-present Them! with Aliens, as clearly James Cameron lifted wholesale from Them!, a movie about 9 foot killer ants starting in a desolate town in New Mexico and then rampaging into LA's vast tunnel system.  Seriously, whole scenes are very clearly from Them!, which I didn't see until roughly 20 years later.

I should mention, I've seen Aliens an estimated 45 times.  I'd seen it 36 times in middle school alone (that is not an estimate, I quite remember).  Add in college and a few other viewings, and I'm an Aliens nerd.  I even owned a shirt circa 1987 that read "Vote LV-426 for World-Con in 86'!" and on the back said "How do you like your eggs?"**


*as a kid, I read the novelization and clearly some stuff got cut featuring Newt's family and Ripley's daughter, but the movie works without those things.
**And that is how I totally did not kiss a girl all the way through middle school.
Posted by The League at 7/10/2011 12:51:00 AM

I say we take off and nuke the entire site from orbit. It’s the only way to be sure.

Great post! I wrote a bit on Ripley as Gaia here: